In 1973, 28 years before the September 11 attacks in New York City, Chile’s military seized control of the Presidential Palace in a coup d’état.
On that day, democratically-elected president Salvador Allende – along with 4,000 others – was killed, over 1,000 people went missing, and close to a million Chileans left the country in exile.

Chile’s democracy came to an end, and a turbulent period began. 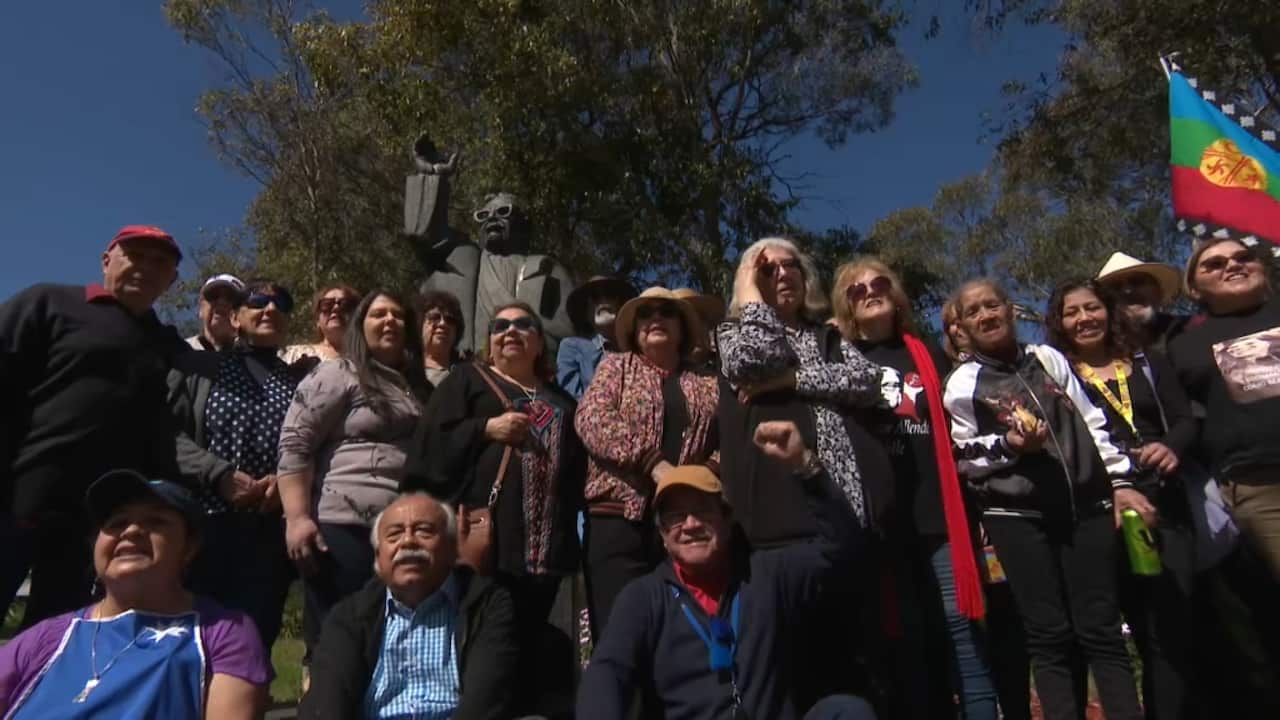 Chilean-Australians say there are still many unresolved aspects of what happened in 1973 that are still impacting the community today – including finding those who remain missing. Source: SBS News

“There is sadness and anger. It’s just like any process of mourning, you go through several stages,” she said.
At a gathering in the Sydney suburb of Fairfield, a group of Chilean-Australians came together to grieve the loved ones who were killed and others who remain missing.

“There are many families here who have lost loved ones … there’s a monument to Salvador Allende, the community looks after it, and there’s a number of trees that they have planted Australian trees, representing some of those missing members who haven’t been yet found.” Chilean-Australians place floral tributes at a statue of Salvador Allende to mark the people who died during the military regime under General Augusto Pinochet. Credit: Apruebo de Salida Australia

Part of the strong emotion in the anniversary is connected to questions around Australia’s involvement, Ms Navarro said.

“On the one hand, we found refuge in Australia and we were welcomed here following the coup d’état, (but) on the other, we know that Australia was actually involved in supporting aspects of the coup d’état,” she said.

“And we have not been able to uncover all of the information that exists in archives here in Australia about that involvement. So it for us it’s, it’s a conflict.” Three years after the 1973 coup, Vlaudin Vega fled Chile as a 16-year-old with his parents and four brothers, and escaped to safety in Australia.
Mr Vega told SBS News his father had been detained, imprisoned and even went missing for a few days in Chile.
“Life became very uncomfortable for us, to say the least … there was a lot of depression, a lot of death, and in the end, a million Chileans left the country,” he said.
“When the military took over, it was a very dark period. It was a very difficult, horrendous period.”

Each year, on the anniversary of what he refers to as “the original 9/11”, Mr Vega says he often gathers with other community members in Sydney, and takes time to analyse and reflect on what happened. “I think it is outrageous.”
Mr Vega said he hoped the anniversary and speaking about the coup would serve as a reminder of the importance of democracy.
“We need to look after democracy. We have to take care of democracy, and prevent any people that might want to take power using that horrific method,” he said.

“Hopefully people learn from our experience.”

Last week, a referendum to replace the military-era constitution in Chile came back with a result that did not support the new proposed document.
The result led President Gabriel Boric to reshuffle his cabinet to broaden the government’s coalition and work on a “new constitutional process”.

Ms Navarro said for many Chilean-Australians, there is a strong desire to see democracy flourish in Chile, particularly for the younger generations. She said the project to rewrite Chile’s constitution is a key part of that.
“I think most of us are now understanding that the road ahead is very long. But we are hopeful. And we’ll just continue as we did today, we will not let go of these issues.
“These are important issues – not just for our the world. We are part of a international community that must respect the rule of law. I’m a lawyer, I’m very much into that. But also because we are still connected to Chile, we have relatives there.”
There is also for her, the desire to see the Australian government reveal the full extent of the involvement of intelligence personnel in the 1973 events.

“We have these unfinished business with Australia. We need Australia to be transparent and reconcile with their own history in terms of their involvement in the coup d’état.” 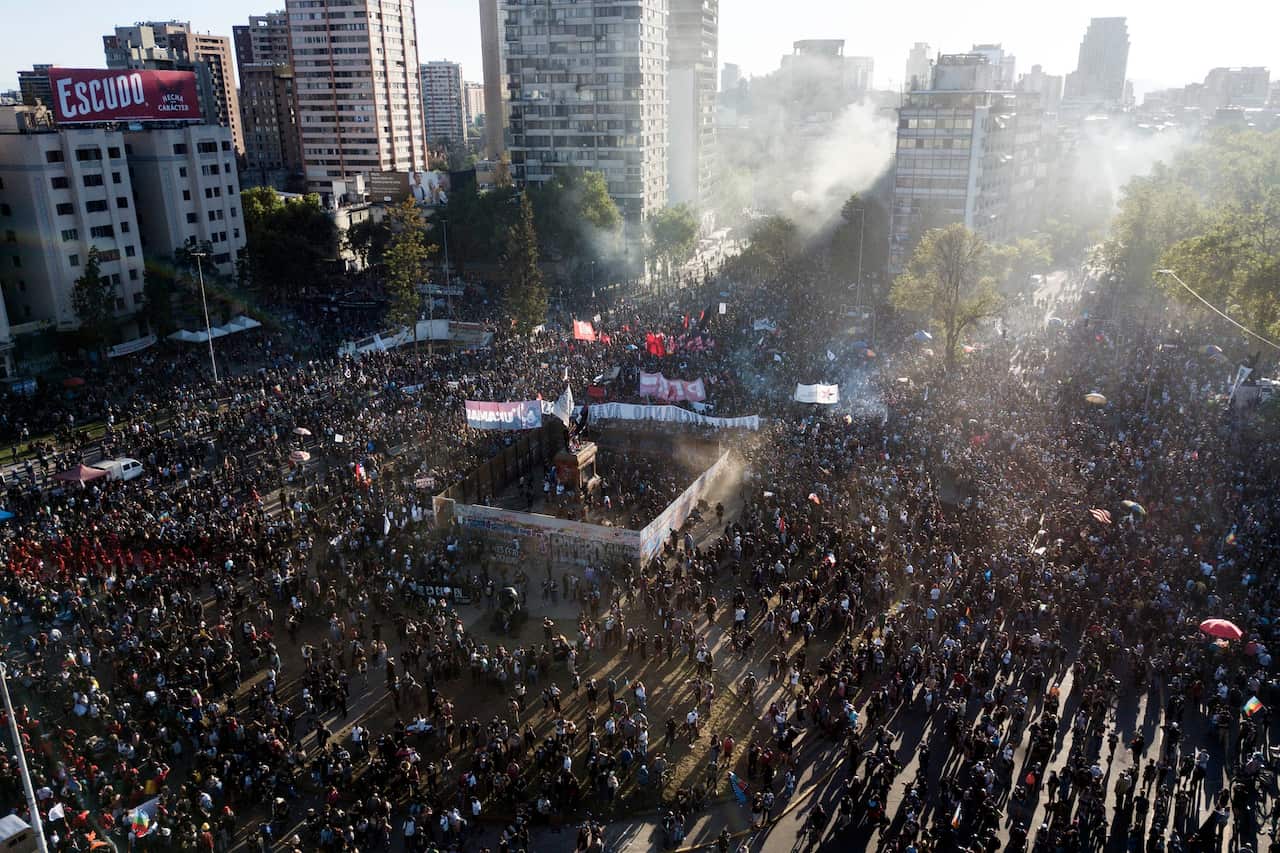 Street protests at Plaza Italia square in Santiago, on October 18, 2021. The mass protests that rocked Chile in October 2019 led ultimately to the decision to create a new constitutional convention to draft a constitution to replace the one written during the dictatorship of Augusto Pinochet (1973-1990). Source: Getty / Javier Torres

In October 2020, almost 80 per cent of Chileans voted in a referendum to replace the old constitution, but the new proposal voted on last week was viewed by some as containing changes deemed too drastic.

The proposal included recognising a right to abortion, a requirement for women hold at least 50 per cent of positions in official institutions, and replacing the Senate with a Chamber of Regions.