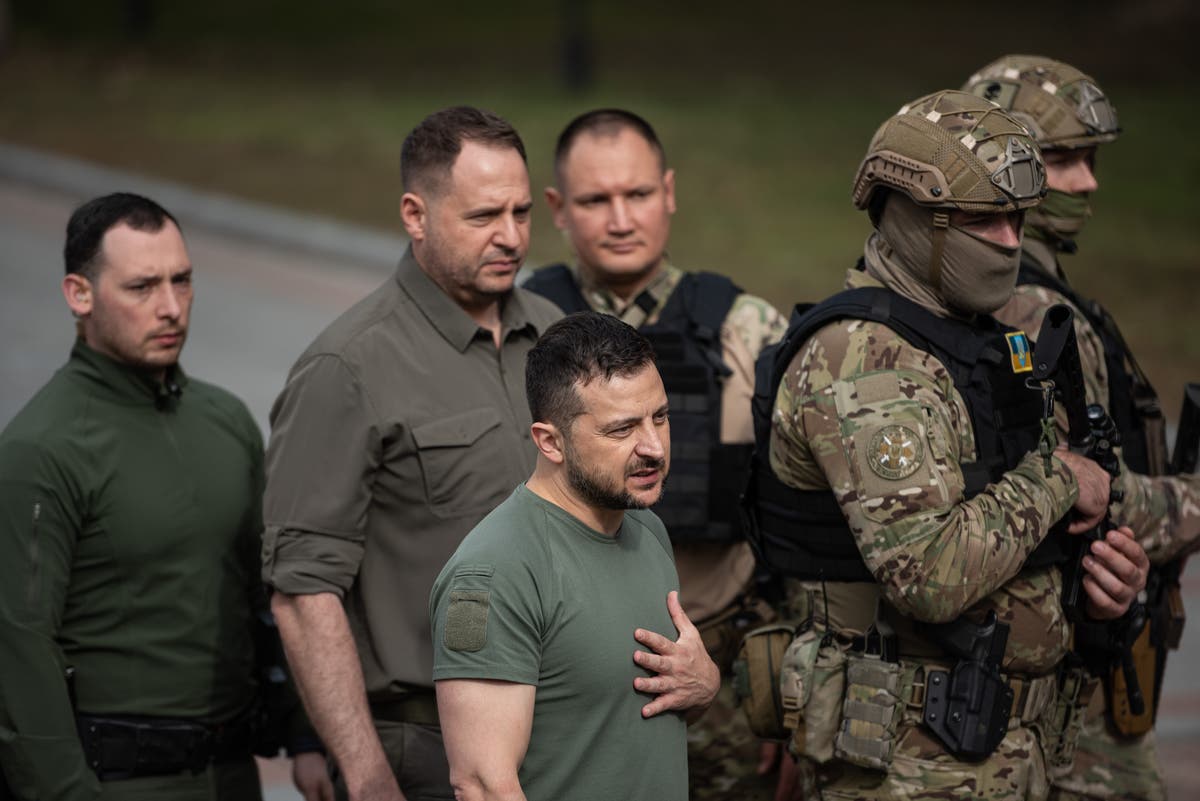 Russia ‘has not lost anything’ from Ukrainian conflict, claims Putin

The retaliation by Russia — after losing significant territory in Ukraine’s northeast — targeted water facilities and a thermal power plant in Kharkiv, knocking out the power grid in the region and causing a complete blackout, officials said.

Volodymyr Zelensky said that the goal of Russian strikes was to deprive civilians of light and heat. Mykhailo Podolyak, an adviser to the president, called it a “coward’s response” from Vladimir Putin’s retreating forces.

It comes just hours after Mr Zelensky confirmed Russia had been forced to abandon its main base in Kharkiv, a potential breakthrough that he said shows Ukraine can win the war.

“Today is 200 days of our resistance,” he said in his nightly address. “Our struggle. Our people’s war. For freedom, for independence, for the right to be.”

Ukraine’s spectacular gains are crucial for the security of Europe

Given the global outpouring of grief at the death of Queen Elizabeth II, one of the most important developments in the Ukraine war risks slipping under the radar.

As our foreign correspondent Bel Trew, who has covered the conflict extensively, wrote yesterday:

In Ukraine – where the continent’s largest conflict since the Second World War had morphed into a brutal and seemingly hopeless war of attrition – the Ukrainian military appeared this week to spectacularly break that stalemate in a surprise counteroffensive in the northeast.

Of course, this does not mean that Ukraine is guaranteed a victory. But they have never seemed closer to one than they have this week, writes Bel Trew

The Institute for the Study of War (ISW), a US military think tank, has just published a useful map of Ukraine’s successful counterattack in the Kharkiv region.

The land Kyiv says it has recaptured in less than a week is pictured in blue:

Russia has ousted an army commander within 16 days of his appointment to his role, Ukraine has claimed, after Kyiv’s forces made major gains.

But he lasted little more than two weeks before being removed, according to Ukrainian military intelligence. Kyiv credited the change in leadership to the “crushing defeats” inflicted on Russia by its troops in the Kharkiv region.

Russian strikes a ‘coward’ response to Ukrainian reclamation of territory

Top Ukrainian official Mykhailo Podolyak said Russian strikes in the northeast had targeted one of the largest electricity station in Ukraine.

“Deliberate strikes on critical civilian infrastructure (in particular, on the largest Kharkiv CHPP-5) — a manifestation of RF’s (Russian Federation’s) terrorism and desire to massively leave civilians without electricity and heat,” the adviser to Ukrainian president Volodymyr Zelensky said.

“A coward ‘response’ for the escape of its own army from the battlefield,” he added.

A photo of the electrical infrastructure on fire was shared by Kyrylo Tymoshenko, the deputy head of the president’s office on Telegram.

However, he added that the power supply had been renewed in some regions.

Ukrainian soldiers have recaptured territory in the war-hit country at least twice the size of Greater London since Wednesday and in the face of Ukrainian counter-attack, Russia has likely withdrawn its soldiers from Kharkiv, the British defence ministry said on Monday.

“In the face of Ukrainian advances, Russia has likely ordered the withdrawal of its troops from the entirety of occupied Kharkiv Oblast west of the Oskil River,” the ministry said in its latest war intelligence update.

It added: “Isolated pockets of resistance remain in this sector, but since Wednesday, Ukraine has recaptured territory at least twice the size of Greater London.”

Russia is likely struggling to bring sufficient reserves forward across the Dnipro River to the front line in the south near Kherson, the ministry added.

Additionally, Russia’s project of an improvised floating bridge started over two weeks ago remains incomplete, according to the ministry.

“Ukrainian long-range artillery is now probably hitting crossings of the Dnipro so frequently that Russia cannot carry out repairs to damaged road bridges,” the ministry said.

Russia’s overall operational design is suffering as a result of the rapid Ukrainian war successes, the British MoD claimed.

“The majority of the force in Ukraine is highly likely being forced to prioritise emergency defensive actions,” the ministry said.

This could lead to further deterioration of “already limited trust” deployed troops have in Russia’s senior military leadership, it added.

Ukrainian officials ordered the shut down of the last operating reactor at Europe’s biggest nuclear power plant in a bid to avert a catastrophe on Sunday as the Zaporizhzhia region continued to face heavy fighting.

The continuous shelling around the Russian-held Zaporizhzhia nuclear power plant which is being operated by Ukrainian staff could lead to the risk of release of radiation, inspectors and Ukrainian officials have warned.

A backup power line to the plant had been restored, the International Atomic Energy Agency said, adding that this will provide the external electricity it needed to carry out the shutdown while defending against the risk of a meltdown.

Emmanuel Macron escalated Europe’s concerns around the nuclear site with his Russian counterpart Vladimir Putin and said that the forced control of the power plant by the Moscow’s troops is the reason why its security has been compromised.

In return, Mr Putin blamed the Ukrainian fighters, a statement from the Kremlin said.

Ukrainian soldiers marked their biggest victory in a counter-offensive over the weekend as Russian soldiers were driven from Izium city in the Kharkiv region — a territory used as a logistics hub by Russian troops.

Ukraine’s offensive in the northeast is a potential breakthrough in the six-month-old war, Volodymyr Zelensky said, adding that the winter could see further territorial gains if Kyiv received more powerful weapons from its international allies.

Russian soldiers left their ammunition and equipment behind as they fled the region, officials said.

Ukrainian soldiers and local officials were met with hugs and handshakes by the villagers in Kozacha north of Kharkiv near the Russian border, Kyiv said.

It represents Moscow’s worst strategic defeat since they were pushed out from the outskirts of the capital city Kyiv in March.

The Russian military attacked civilian infrastructure in the besieged country’s northeastern region after Ukrainian troops launched a rapid offensive over the weekend, leading to power and water outages in Kharkiv, officials in Kyiv alleged.

Volodymyr Zelensky confirmed the attack on the power grid late on Sunday and said: “A total blackout in the Kharkiv and Donetsk regions, a partial one in the Zaporizhzhia, Dnipropetrovsk and Sumy regions.”

He said the Russian “terrorists remain terrorists”, saying there was no military objective to the attacks on the facilities and rather the “goal is to deprive people of light and heat”.

Bridget Brink, the US ambassador to Ukraine, also condemned the alleged strikes by Russia.

The Kremlin has rejected the allegations by Kyiv and repeated its assertion that it is not targeting civilian infrastructure in Ukraine.

Good morning! Welcome to our coverage of the Ukraine war for Monday, 12 September.