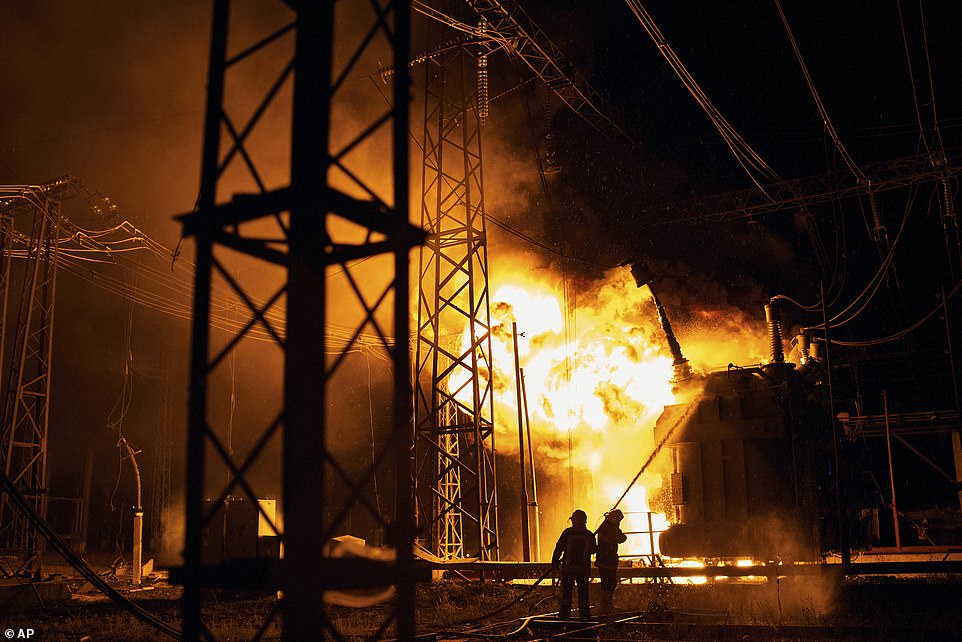 Russia blew up Ukrainian power plants overnight, plunging a third of the country into darkness in apparent revenge for its armies being routed in the east.

Mr Podolyak branded it ‘a coward’s response to the escape of [Russia’s] own army from the battlefield’ while Zelensky vowed: ‘Cold, hunger, darkness and thirst – for us not as scary and deadly as your “friendship and brotherhood.” History will put everything in place. And we will be with gas, lights, water… and WITHOUT you!’

It came after Ukraine’s army mounted a stunning counter-attack east out of Kharkiv at the weekend – breaking through poorly-defended Russian lines, routing Putin’s troops, and capturing more than 1,000 square miles of territory.

Russian missiles struck Ukraine’s power plants overnight, plunging around a third of the country into darkness 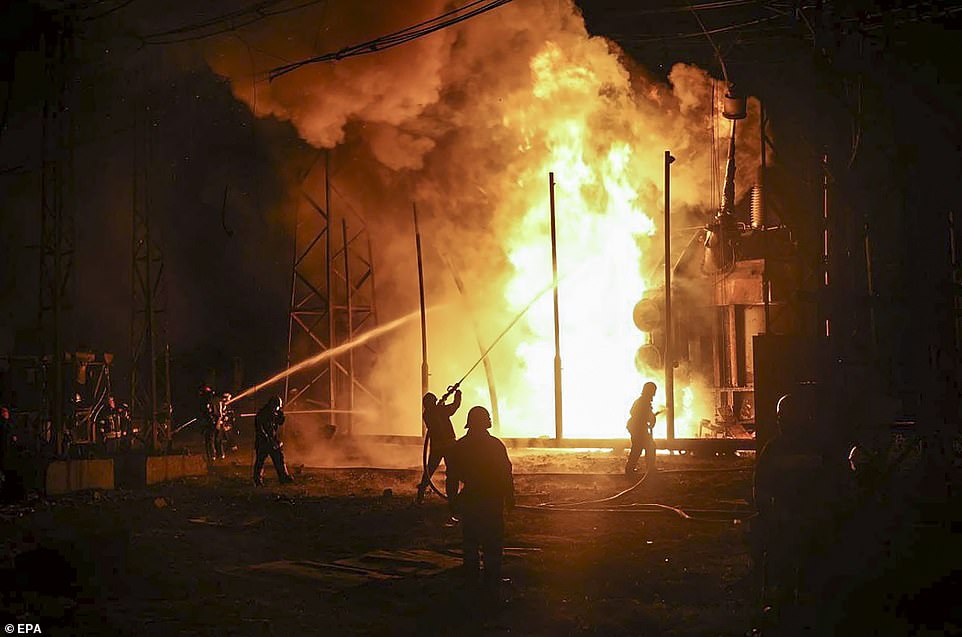 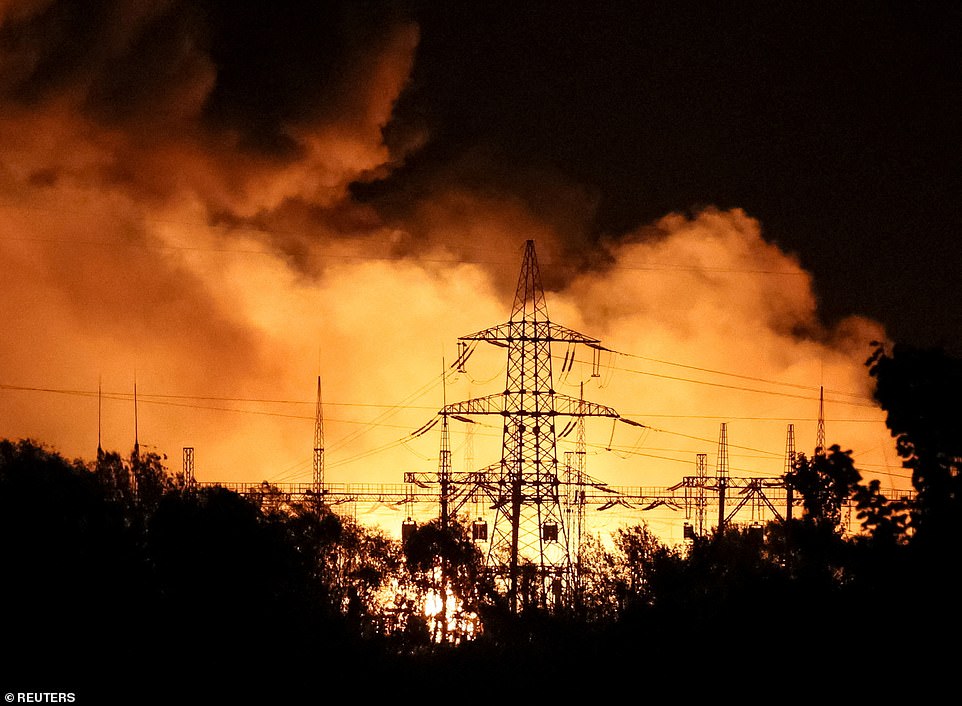 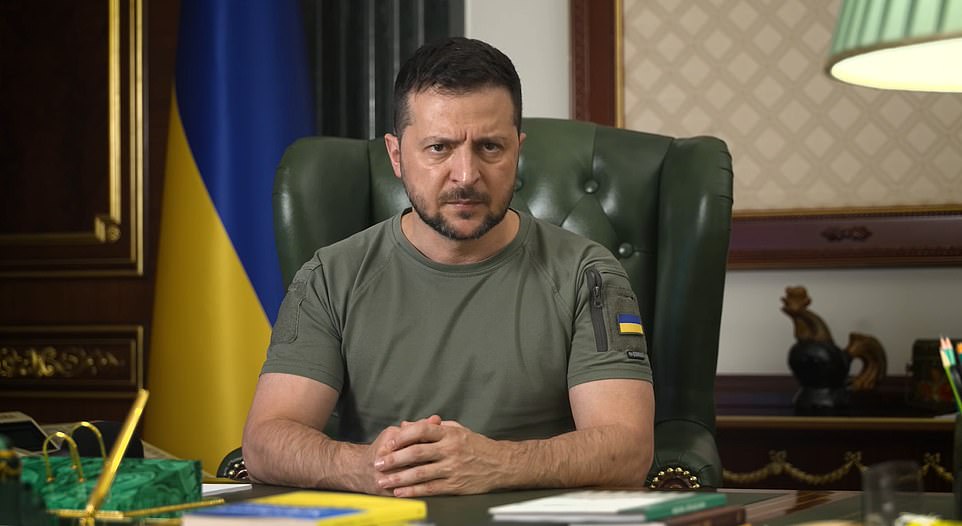 President Zelensky vowed that energy shocks, blackouts, attacks on water and food supplies will not break the will of the Ukrainian people to resist Russia’s invasion

As of Monday morning, Ukraine was in control of Kup’yans’k – a key logistical hub containing railway lines used to supply its troops in Donbas – Izyum – launching point for the Donbas offensive – and Vovchansk – just a few miles from the Russian border.

Russia’s defence ministry has attempted to play off the defeat as a ‘regrouping’ of troops from the cities of Balakliya and Izyum to nearby Donetsk to ‘boost efforts in the area’.

But British intelligence said Monday that a general retreat had likely been ordered from the whole Kharkiv region, with Ukraine re-capturing an area twice the size of greater London at the weekend.

Meanwhile Petro Kuzyk, a commander whose troops participated in the offensive, told the Financial Times that the Russians fled so fast that meals were still laid out on tables when his men arrived.

‘We hoped for success but didn’t expect such cowardly behaviour,’ he said. ‘They abandoned their tanks and equipment . . . even grabbed bicycles to escape.

‘That the Russian army is completely degraded made our work easier; they fled like Olympic sprinters.’

The sensational move has been hailed by analysts as one of the greatest counter-offensives in modern history which would be studied for years to come.

It leaves Russia’s forces across the entire eastern front at risk of being routed, piles pressure on troops fighting a second Ukrainian counter-attack in the south, and leaves Vladimir Putin facing the real risk of total defeat in Ukraine.

In the midst of the power cuts, Zelensky told Putin: ‘Even through the impervious darkness Ukraine and the civilized world clearly see these terrorist acts. 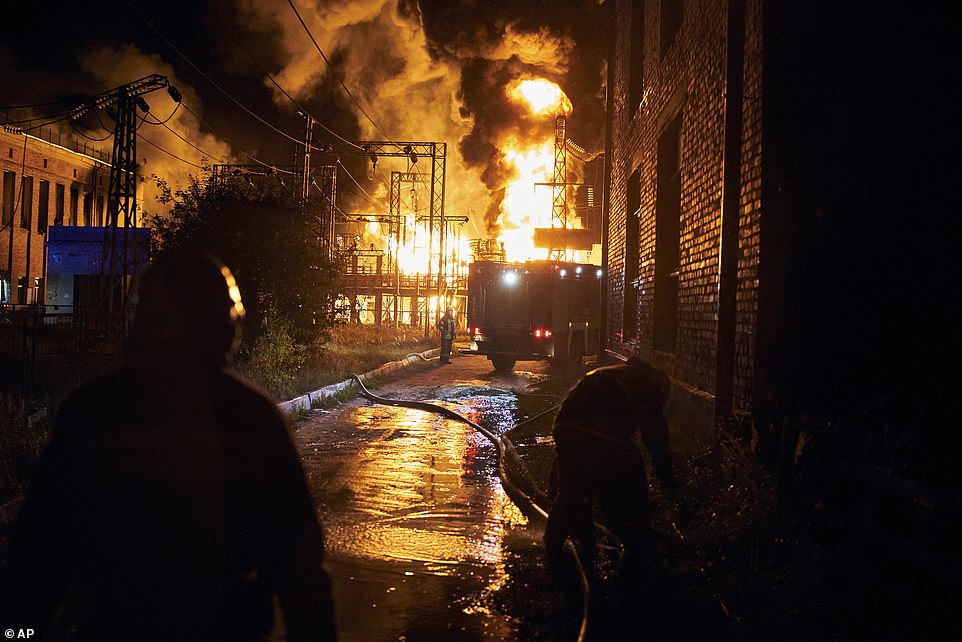 A third of Ukraine was left without electricity overnight after Russia struck power stations with missiles, in apparent revenge for its latest military humiliation 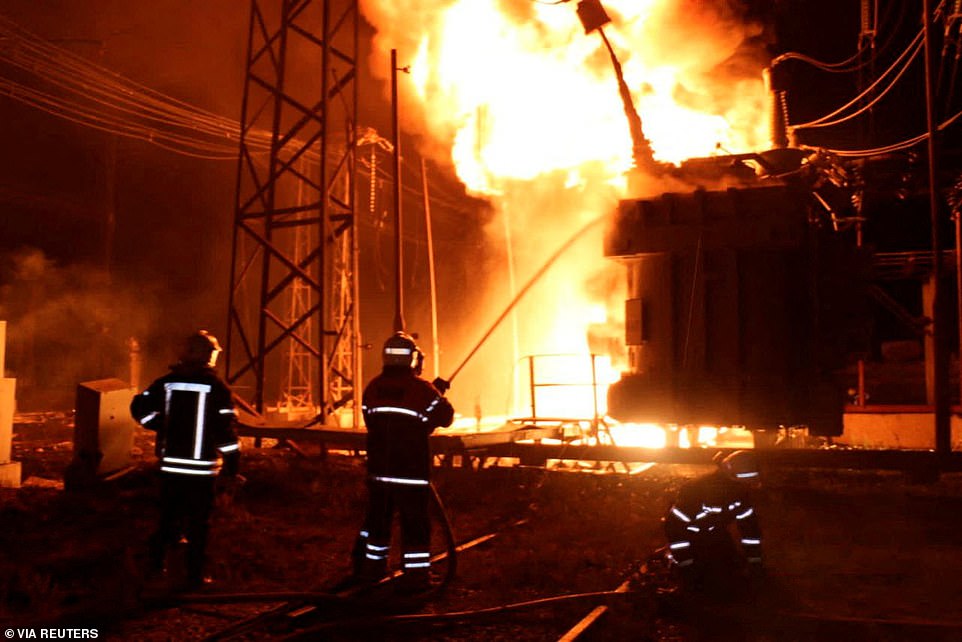 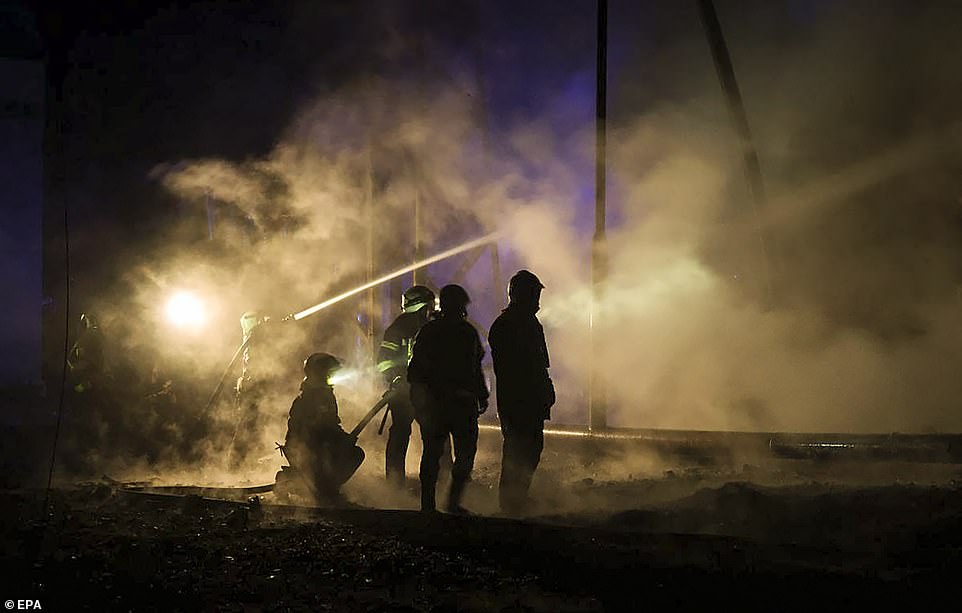 ‘Without light or without you? Without you.

‘Without water or without you? Without you.

‘Without food or without you? Without you.

‘Cold, hunger, darkness and thirst – for us not as scary and deadly as your “friendship and brotherhood.”

‘But history will put everything in place. And we will have gas, lights, water and food.. and WITHOUT you!’

Videos show strikes which plunged almost one third of Ukraine into darkness from power cuts.

Footage highlighted a strike on a key power plant in Kharkiv region, and more showed the city’s underground train system at standstill. 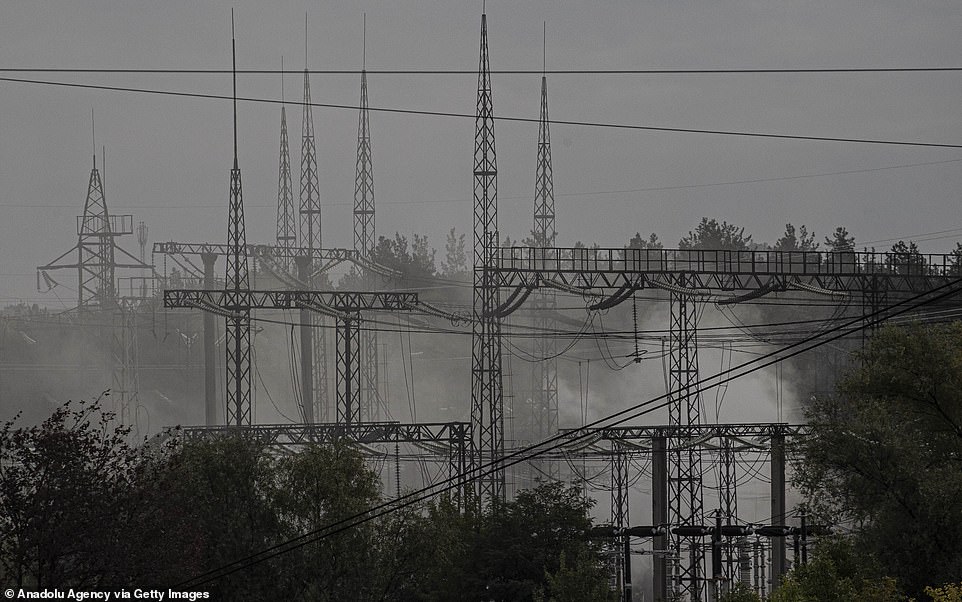 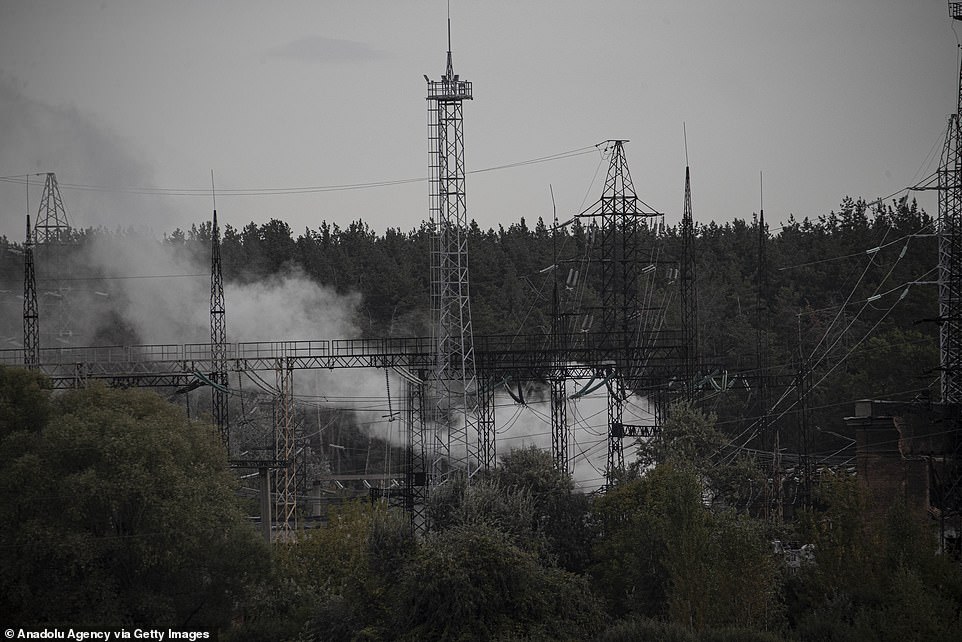 Ukraine says power was restored just a few hours after the strikes, as Zelesnky vowed the attacks will not break the morale of his people

Flames were seen at a power plant in Vilnohirsk, Dnipropetrovsk region.

US ambassador to Kyiv Bridget Brink, denounced the strikes calling them Putin’s ‘apparent response to Ukraine liberating cities and villages in the east’.

The attacks struck the largest thermal power plants in eastern and central Ukraine – Kharkovskaya and Zmievskaya in Kharkiv region, leading to a lack of generating capacity, according to Russian sources.

The plants provide central heading to Ukrainian homes, meaning the attack was aimed at harming civilians.

‘The collapse of the power system has spread to the networks of Kharkiv, Sumy, Dnepropetrovsk, Zaporozhye and Odessa regions,’ said Rybar pro-war channel.

‘It also affected the areas of Donetsk regions controlled by the Armed Forces of Ukraine, the Kyiv region and the capital of the country.’

Electric trains stopped ‘almost all over the country’, and in Poltava several trolleybuses caught fire right on the streets, claimed Rybar pro-war Telegram channel which echoed demands from other hardliners for more savage attacks. 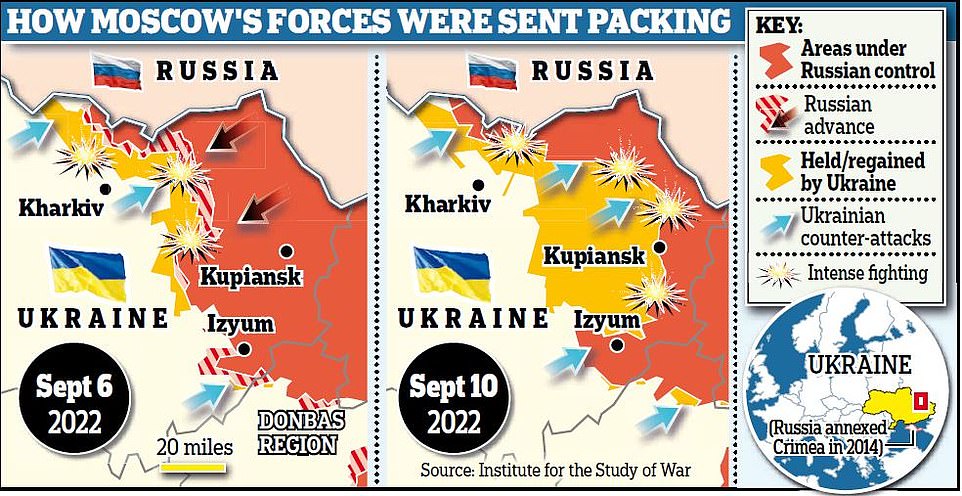 A counter-offensive by Ukrainian forces has seen troops push to within 30 miles of the border, amid reports panicked Russian troops have been abandoning tanks, weapons and supplies 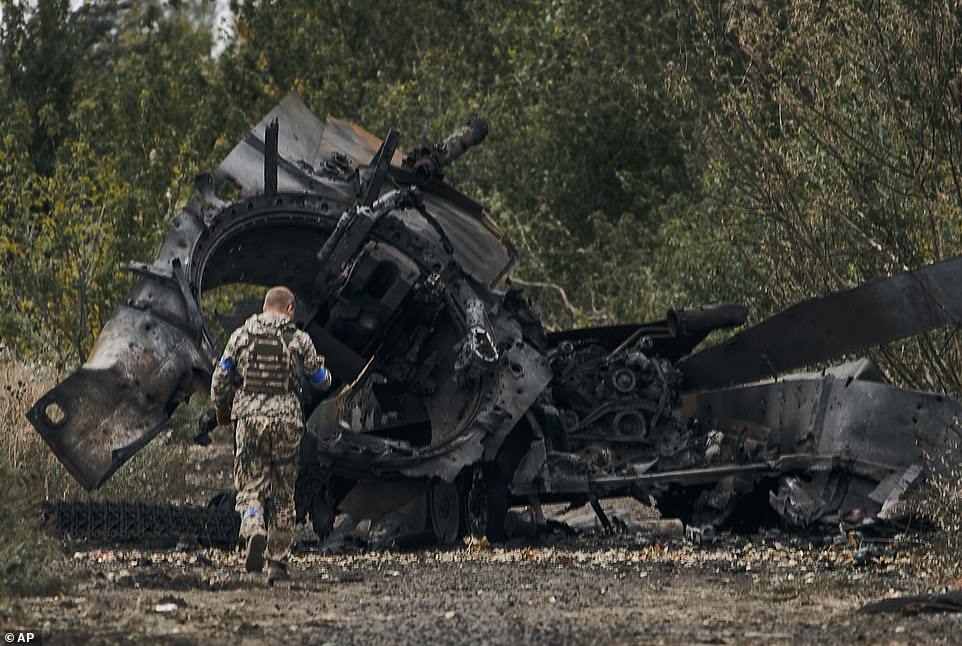 A Ukrainian soldier passes by a Russian tank damaged in a battle in a just freed territory on the road to Balakleya in the Kharkiv region, Ukraine 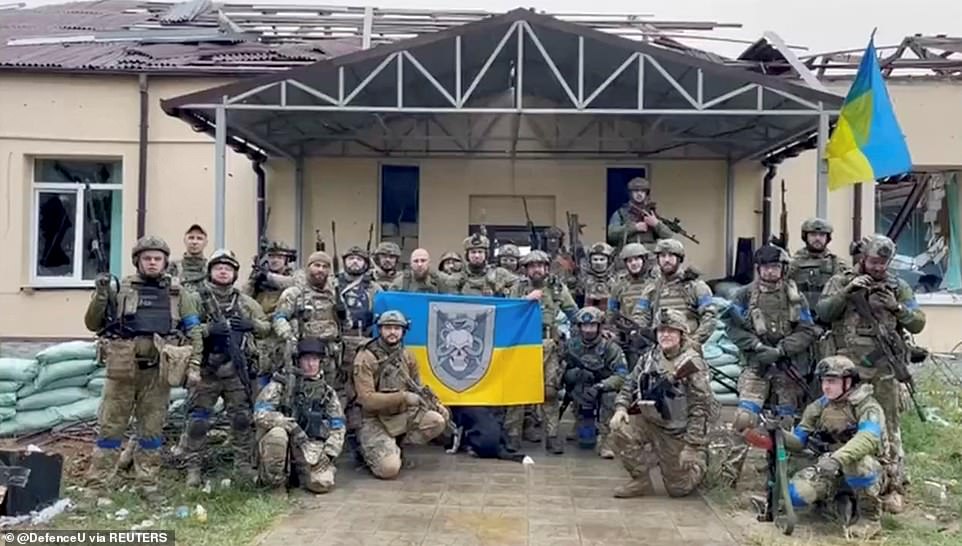 Ukrainian troops stand in a group, amid Russia’s invasion of the country, at a location given as Hoptivka, Ukraine in this picture obtained from social media and released on September 11

‘This measure is a good signal for hotheads making loud statements against the background of the success of the Armed Forces of Ukraine in the Kharkiv region.

‘So the impact on the critical infrastructure of the enemy must continue.

‘And not only at substations and thermal power plants, but also at bridges across the Dnieper.’

In the worst defeat for Moscow’s forces since being ousted from the outskirts of Kyiv in March, thousands of Russian soldiers left behind ammunition and equipment as they fled Izium city, used by Putin’s forces as a logistics hub.

Putin propagandist Margarita Simonyan posted: ‘What happened to your energy and light, neighbours?

Russian state TV propagandists started a blame game over the failure of the war amid the crushing defeat in Kharkiv region.

Former MP Boris Nadezhdin bluntly told viewers: ‘People who convinced President Putin that the special operation will be fast and effective [and] we won’t strike the civilian population, we’ll come in, and our National Guard…. will bring things to order — these people really set all of us up.’