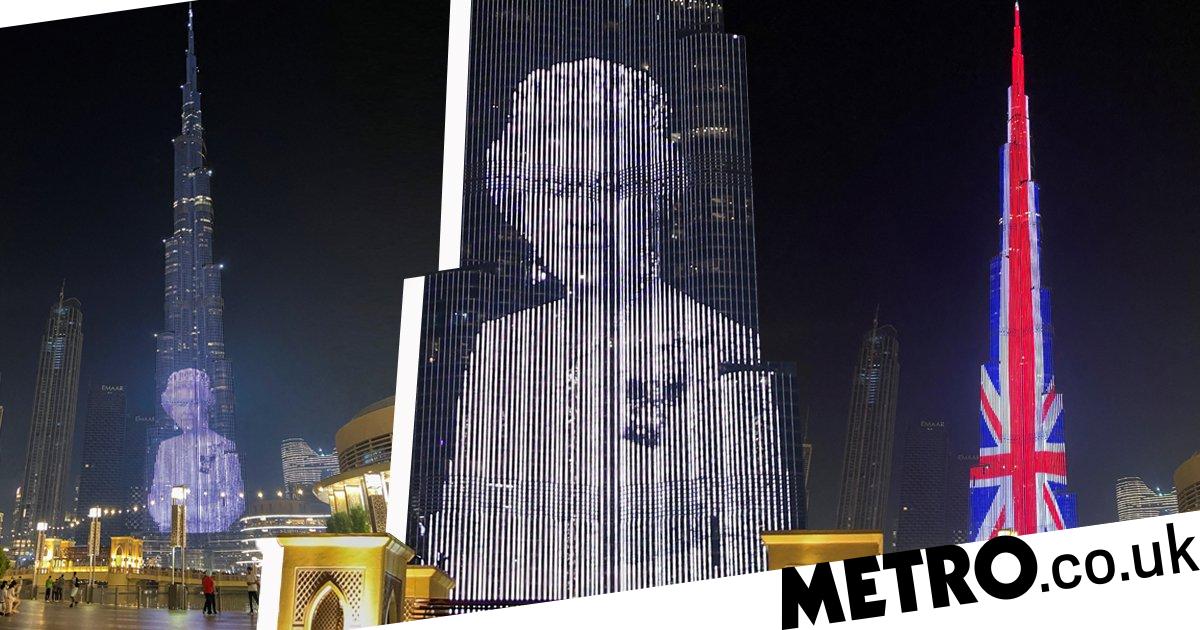 The tallest building in the world has been lit up with an image of Queen Elizabeth II in a 2,700ft-sized tribute to Britain’s longest-serving monarch.

The Burj Khalifa skyscraper in Dubai was also illuminated with the Union Jack flag to pay tribute to Her Majesty, who died on Thursday aged 96.

It is one of many iconic buildings emblazoned with huge portraits of the Queen.

New York’s Empire State Building dazzled with a purple and silver display to pay homage to the monarch.

A Twitter account for the building posted: ‘Tonight, our tower lights will shine in purple and sparkle in silver to honour the life and legacy of Her Majesty, Queen Elizabeth II.’

An earlier post showed a black and white picture capturing a young Queen on a visit to the world-famous skyscraper in 1957.

Meanwhile the Brandenburg Gate in Berlin and Brazil’s Christ the Redeemer statue overlooking Rio de Janeiro were also lit up in red, blue and white.

Billboards in the Big Apple and Las Vegas also displayed the Queen’s portrait.

Sydney Opera House projected the Queen onto its famous sails, hailing her as a ‘model of strength and stability.’

Closer to home, Legoland in Windsor added flags at half mast and figurines depicting mourners laying flowers to its Windsor Castle and Buckingham Palace displays.

Meanwhile, the lights on the Eiffel Tower in Paris were switched off at midnight on Friday to express the city’s ‘deep sympathy and support for the people of the UK,’ said mayor Anne Hidalgo.

Expected timeline of key events over the next few days

Britain has officially entered a period of national mourning following the death of the Queen.

It will continue until the end of the day of the State Funeral, scheduled to take place next Monday, September 19.

Queues to see the monarch lying in state are said to stretch up to five miles, with people hoping to pay their final respects warned they could face a 20-hour wait.

This morning King Charles addressed Parliament for the first time as Britain’s monarch – as MPs and peers assembled to pay tribute to his beloved late mother.