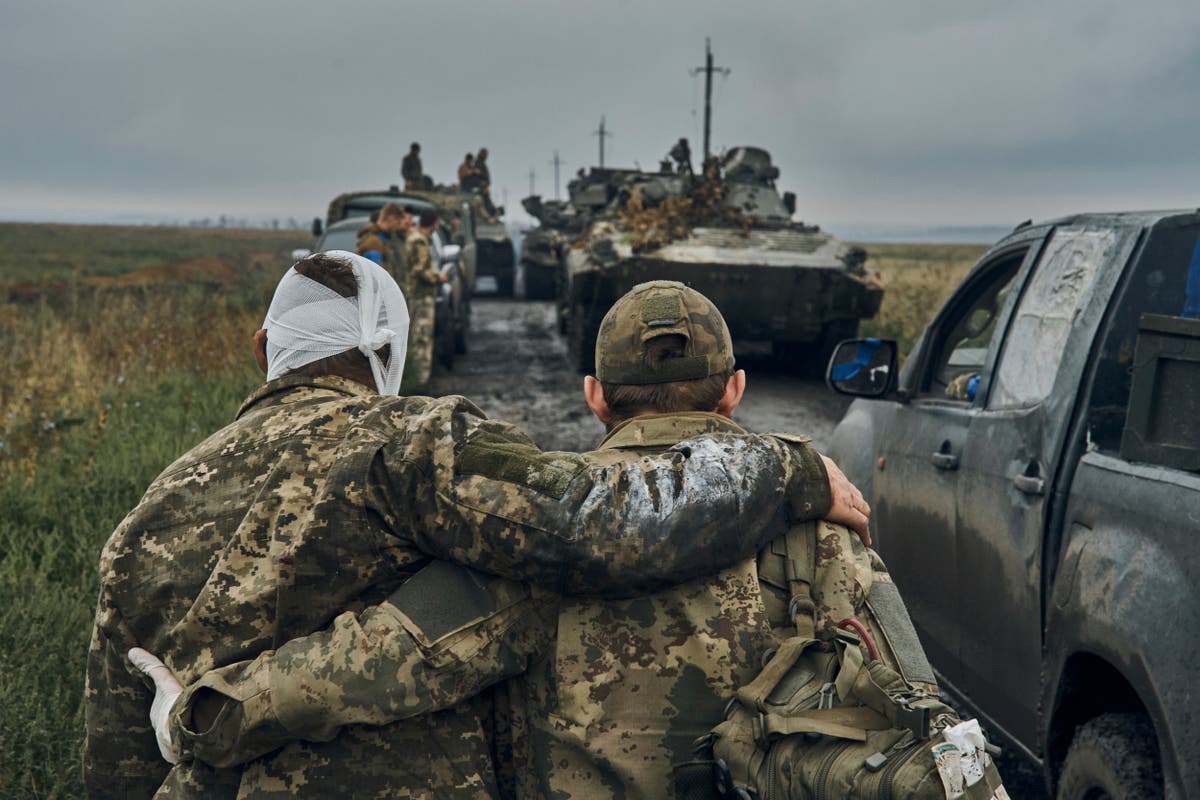 RUSSIA-UKRAINE WAR-UNITED STATES — U.S. leaders from President Joe Biden on down are being careful not to declare a premature victory after a Ukrainian offensive forced Russian troops into a messy retreat. Instead, military officials are looking toward the fights yet to come and laying out plans to provide Ukraine more weapons and expand military training, while warily awaiting Russia’s response. By Ellen Knickmeyer and Lolita C. Baldor. SENT: 1,100 words, photo.

BRITAIN-ROYALS — As Queen Elizabeth II’s four children walked silently behind, a hearse carried her flag-draped coffin Monday along a crowd-lined street in the Scottish capital to a cathedral, where a service of thanksgiving hailed the late monarch as a “constant in all of our lives for over 70 years.” SENT: 1,140 words, photos, videos. With AUSTRALIA-BRITAIN-ROYALS — Lawmakers in Australian state pledge allegiance to king; PAPUA NEW GUINEA-BRITAIN-ROYALS — King Charles III proclaimed Papua New Guinea head of state.

INDIA-BRITAIN-ROYALS — Among most regular Indians, the news of Queen Elizabeth II’s death was met with an indifferent shrug. Colonial rule is remembered for the extraordinary violence and suffering, from famines and economic exploitation to ultimately an unprecedented level of bloodshed in the partition of India and Pakistan. By Krutika Pathi and Bhumika Saraswati. SENT: 990 words, photos, videos.

TRUMP-PAC — With more than $115 million held in several political committees, Donald Trump is a uniquely indomitable force in the GOP. But the massive pile of money that sets the former president apart from other prominent Republicans is also emerging as a potential vulnerability. His chief fundraising vehicle, Save America PAC, is under new legal scrutiny. By Jill Colvin, Brian Slodysko and Eric Tucker. SENT: 1,640 words, photo. An abridged version of 1,100 words is also available.

CONSUMER PRICES — A sign that the painful inflation of the past 18 months may be gradually easing could come Tuesday, when the government is expected to report that the acceleration in U.S. prices slowed in August compared with a year ago for a second straight month. By Economics Writer Christopher Rugaber. SENT: 800 words, photos. UPCOMING: 130 words after release of report at 8:30 a.m., then updated.

ELECTION 2022-DEMOCRATS — With critical midterm elections looming, Democrats are trying to seize the political offensive — even if it sometimes means embracing the kind of confrontational tactics Trump and his fiercest supporters so relished. SENT: 1,070 words, photos.

ELECTION 2022-RHODE ISLAND — Rhode Island Gov. Dan McKee is facing a tough challenge from the secretary of state in the Democratic primary as he seeks his first full term in office after taking over when two-term Gov. Gina Raimondo was tapped as U.S. commerce secretary. SENT: 810 words, photo.

CAPITOL RIOT-INVESTIGATION — The House Jan. 6 committee is eyeing a close to its work and a final report laying out its findings about the Capitol insurrection by the end of the year, but the investigation is far from over. SENT: 1,130 words, photos.

SEATTLE TEACHERS STRIKE — Seattle Public Schools said it had reached a tentative agreement with the union for teachers who went on strike last week over issues like pay and classroom support. SENT: 700 words, photo.

WESTERN WILDFIRES — Heavy rains unleashed mudslides in a mountain area east of Los Angeles that burned two years ago, sending boulders and other debris across roads and prompting evacuation and shelter-in-place orders for thousands of residents. SENT: 810 words, photos.

NEWTOWN SHOOTING-INFOWARS — A Connecticut jury is slated to begin hearing evidence in a trial to decide how much money conspiracy theorist Alex Jones should pay relatives of victims of the Sandy Hook Elementary School shooting for spreading a lie that the massacre was a hoax. SENT: 380 words, photo.

IDENTIFIED REMAINS-WORLD WAR II — A 21-year-old sailor from Illinois is being laid to rest at Arlington National Cemetery — more than 80 years after he was killed in the Japanese attack of Pearl Harbor. SENT: 710 words, photos.

KAZAKHSTAN-PAPAL VISIT — Russia’s war in Ukraine and the Holy See’s strained relations with China are the backdrop to Pope Francis’ visit this week to the former Soviet republic of Kazakhstan, where he is ministering to a tiny Catholic community and participating in an interfaith conference aimed at promoting peace and dialogue. SENT: 590 words, photos.

EMIRATES-MUZZLED MEDIA — A state-linked newspaper in the United Arab Emirates published a story this summer about a hot-button issue in the country: How Emiratis are coping with high fuel prices. Editors, accustomed to the UAE’s strict press laws, thought it safe. Instead, it unleashed a firestorm. SENT: 1,000 words, photos.

CHINA-RUSSIA — President Xi Jinping is using his first trip abroad since the start of the pandemic to promote China’s strategic ambitions at a summit with Russia’s Vladimir Putin and other leaders of a Central Asian security group. SENT: 650 words, photo.

KENYA-ELECTION — A number of people were crushed and injured as Kenyans forced their way into a stadium where William Ruto will be inaugurated as president. SENT: 150 words, photos.

SOUTH-KOREA-DENMARK-ADOPTIONS — Nearly 300 South Koreans who were adopted to European and American parents as children are demanding South Korea investigate their adoptions, which they suspect were based on falsified documents that laundered their real status or identities as agencies raced to export children. SENT: 1,010 words, photos.

EMMYS-MOMENTS — As a kindergarten teacher on “Abbott Elementary,” she can get an unruly class to sit up and listen. And that’s exactly what Sheryl Lee Ralph did at the Emmys — capturing the attention of a packed theater and a global TV audience with a stirring acceptance speech for the ages. By National Writer Jocelyn Noveck. SENT: 990 words, photos.

HOW TO REACH US