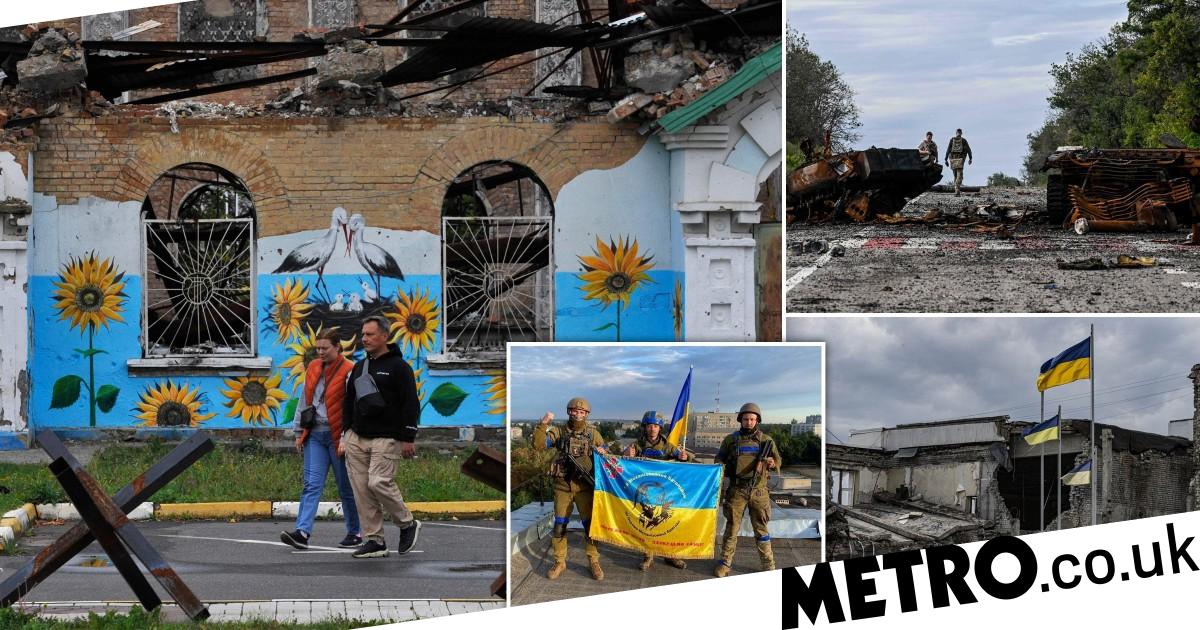 Volodymyr Zelensky’s forces have liberated territory ‘at least twice the size of Greater London’, according to the British government.

Videos of soldiers being greeted by women with tears of joy have been circulating on Twitter in recent days after the Ukrainian army ramped up its counteroffensive.

‘People are crying, people are joyful, of course. How could they not be joyful,’ said retired English teacher Zoya in Zolochiv, north of Kharkiv, and 10 miles from the Russian frontier.

The 76-year-old wept as she described the months of sheltering in the cellar.

Nastya, 28, had fled the village in April but returned last week after the reports of Ukrainian advances.

‘I think everyone’s in a great (mood). It’s all over now. At least we hope it’s all over,’ she said, queuing for groceries with two small children.

According to the Ukrainian president, more than 2,300 square miles of Russian-occupied land in the east and the south since has been recaptured since the start of September.

In the south, troops repelled attempted Russian advances in two important areas of the Donetsk region – the city of Bakhmut and the suburb of Maiorsk.

A spokesperson for Ukrainian military intelligence said Russian troops were surrendering en masse as ‘they understand the hopelessness of their situation’.

According to a presidential adviser, there were so many prisoners of war (POWs) the country was running out of space to accommodate them.

Now Ukrainian teams are disarming land mines and other unexploded weapons in the recaptured areas and searching for any remaining enemy troops, officials said.

Metro.co.uk has not been able to independently verify the exact number of liberated villages and towns.

In its latest defence intelligence update on the war, the British Ministry of Defence (MoD) said: ‘In the face of Ukrainian advances, Russia has likely ordered the withdrawal of its troops from the entirety of occupied Kharkiv Oblast west of the Oskil River.

‘Isolated pockets of resistance remain in this sector, but since Wednesday, Ukraine has recaptured territory at least twice the size of Greater London.

‘In the south, near Kherson, Russia is likely struggling to bring sufficient reserves forward across the Dnipro River to the front line.

‘Ukrainian long-range artillery is now probably hitting crossings of the Dnipro so frequently that Russia cannot carry out repairs to damaged road bridges.

‘The majority of the force in Ukraine is highly likely being forced to prioritise emergency defensive actions.’

In Kharkiv, the capital of the region where the gains have been made, authorities hailed that power and water had been restored to about 80% of the population.

Russian attacks on infrastructure had knocked out electricity in many places across the country.

‘You are heroes,’ Kharkiv mayor Ihor Terekhov wrote on Telegram, referring to crews who restored utilities in Ukraine’s second-biggest city.

‘Thanks to everyone who did everything possible on this most difficult night for Kharkiv to normalise the life of the city as soon as possible.’

Even Russia has admitted Ukraine’s remarkable advances in the north-east of the country.

Vitaly Ganchev, Moscow-installed head of occupied Kharkiv, revealed that invaders are outnumbered eight to one.

He conceded Ukrainian forces had recaptured a string of villages in the region in a ‘lightning’ assault.

He told TV channel Rossiya-24 some 5,000 civilians had been evacuated to Russia, and the border shut.

‘The situation is becoming more difficult by the hour,’ Mr Ganchev added.