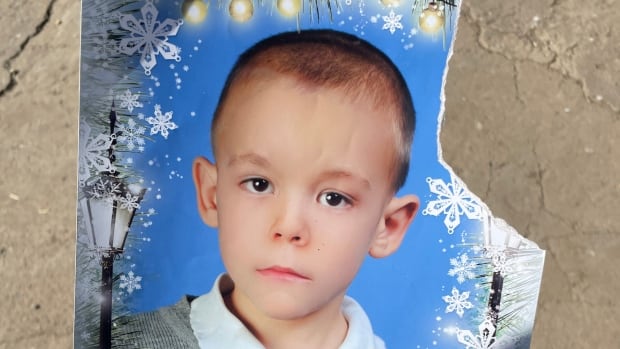 It all happened in a second, Serhiy Hulevich repeats over and over again as he recounts the death of his eight-year-old son, Oleksandr.

He anxiously circles the courtyard of his home, showing the newly formed pockmarks and constellation of shrapnel scars from shelling just a few days earlier.

“Everything was in one second. Everything started to fall apart,” Serhiy told CBC News just days after his son’s death, through a translator, with more shelling in the distance.

It was 11 a.m. on Sept. 3, and some of Serhiy’s five children were playing in the courtyard of their small home in Vysunsk, a village in the Mykolaiv region of southern Ukraine.

Then the shelling started. Everyone scattered and three of the kids ran into the home’s passway with his wife, Olha Dyriy.

But Oleksandr, or Sasha as he was called, hid in the garage. When the confusion and loud attack ended, Serhiy and Olha went looking for him.

“We were calling him, but everything was quiet,” said Olha, her voice shaking, “I couldn’t see Sasha.”

They found him lying on his stomach next to a motorbike, with severe shrapnel wounds to his head. Serhiy picked him up and put him in a chair. They called an ambulance, but he was already gone.

“Nothing was inside his head,” his father says, describing the severity of his son’s injuries.

Sasha’s gruesome, tragic death was reported in the same way many are now in Ukraine. A message on the social media app Telegram on Sept. 3 read: “As a result of shelling in Mykolaiv and Oblast [region], 6 people were injured … One child was killed.”

He died the same week that Save the Children reported a grim statistic: 1,000 children have been killed or injured in the last six months of war in Ukraine. That’s an average of five a day, according to an analysis the organization did with verified UN data.

As the war in Ukraine grinds on into its seventh month amid shifting front lines, air strikes and artillery continue to kill and maim civilians, including kids who have no stake in this war, and are powerless to escape.

Sasha liked cars and was a very good boy, his father said. He helped out with his younger siblings and was supposed to start Grade 3 last week.

Now his grave is just metres away from where he went to kindergarten, a short bike ride from Olha and Serhiy’s home.

Life near the front lines

The family’s modest home and shed was hit several times in the attack, and the shelling destroyed the roof of the building they used to store wood for the winter. A hand-sized crater in the stone courtyard marks the spot where the projectile that killed Sasha landed.

“You see what the shrapnel did?” asked Serhiy. “You see there, here? Everything was flying and everything happened in one second.”

The same day there were also strikes on Serhiy’s neighbour’s house, where more children were playing outside. His neighbour’s child was taken to the intensive care unit of a hospital in Odesa, he said.

“They are very, very cruel people,” Serhiy said of the Russians he said hit his village. “Why would they punish a kid? He didn’t have the opportunity to see the world.”

The sounds of shelling are heard more frequently in recent weeks, according to Serhiy, who noted that the loud bangs wake him up in the early morning, at 2 a.m.

“Very huge explosions,” he said. “When people are deeply sleeping.”

WATCH | Those who stayed in Mykolaiv, Ukraine, are scared but hopeful:

Frequent shelling has driven out much of the population of Mykolaiv, Ukraine, a city on the country’s southern coast. Those who remain are surviving with the help of foreign aid. They say they are scared, but hopeful.

The family had stayed because Olha’s mother, who has disabilities, couldn’t easily make the trek somewhere safer. But now, they plan to go to Western Ukraine to stay with Serhiy’s sister and father.

“I am planning to move away from here because there won’t be life in this area anymore,” he said.

As soon as they complete the documentation to certify Sasha’s death, he says they will go.