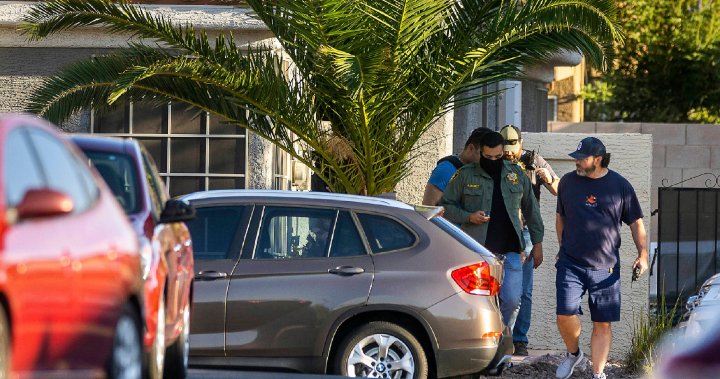 The slaying of a Las Vegas newspaper reporter, allegedly at the hands of one of his investigative targets, is driving home a reality the U.S. hasn’t had to confront since the Civil War: journalism on home soil is becoming more dangerous.

Jeff German, 69, an old-school investigative reporter with the Las Vegas Review-Journal, was stabbed to death outside his home last week – months removed from his expose of the Clark County Public Administrator’s office.

That administrator, Robert Telles, appeared in court Thursday to face murder charges, his forearms bandaged from what police – who allege that traces of his DNA were found under German’s fingernails – described as self-inflicted wounds.

“I would like to have said, ‘No, we didn’t see this kind of thing coming in the United States,’” said Celeste Gonzalez de Bustamante, a professor of journalism at the University of Texas at Austin.

“But we’ve often said that what’s happening in other parts of the world, where press freedoms are under significantly more pressure, is a harbinger of what could be coming in places like the United States.”

It worsened considerably during the presidency of Donald Trump, Gonzalez de Bustamante said, thanks to a brazen weaponization of media distrust that culminated in calling CNN “fake news” and supporters wearing T-shirts that read, “Rope. Tree. Journalist. Some assembly required.”

“People would say, ‘Oh, you know, this is just talk’ – but talk ends up creating an atmosphere and an environment where physical attacks against journalists are OK.”

So far in 2022, the U.S. Press Freedom Tracker, an online database managed by the Freedom of the Press Association, has catalogued 28 assaults against members of the media, most of them the result of direct targeting.

It’s a far cry from 2020, when coverage of Black Lives Matter rallies across the country, as well as the superheated atmosphere of that year’s presidential election, resulted in more than 600 reported assaults.

The total for 2021 was 145, many of them coming on Jan. 6 on the grounds of Capitol Hill as Trump supporters swarmed Congress in hopes of disrupting the certification of Joe Biden’s election win.

German’s series of reports, which began in May, described years of turmoil, bullying, workplace hostility and favouritism during Telles’s tenure in the administrator’s office, and likely helped to sink the accused’s re-election bid in June.

Police also found other evidence at German’s home: pieces of a straw hat and bloody shoes that appeared to match those worn by a suspect in an image captured by neighbourhood surveillance video earlier in the day.

Video also shows the suspect driving a vehicle matching the description of an SUV registered to Telles’s wife – a vehicle that investigators towed away from his home on the day of his arrest.

“We cannot remember an elected politician attacking a journalist like this. We hope never to see it again,” the D.C.-based National Press Club said in a statement.

Harassment, threats to journalists during protests are dangerous, say experts

Only 39 journalists have been killed on U.S. soil to date, most of them during the Civil War. Nine have died in the last 30 years, including four who were killed in a mass shooting at a Maryland newsroom in 2018.

“The Capital Gazette, where the newsroom was attacked because of what was written, comes immediately to mind,” the club said.

“It was not long ago. Journalists can be killed while doing their work.”

The political climate in the U.S. and elsewhere around the world, where the media is increasingly under attack from behind political podiums, is exacerbating an already dangerous situation, said Gonzalez de Bustamante.

“You have an environment where misinformation and disinformation is rampant,” she said, and media literacy – a public understanding of how journalists actually do the work of gathering news – is at an all-time low.

“It’s all of these sort of factors coming together, and creating a real recipe for disaster and for violence.”

The U.S. is hardly the only western country where journalism has become a more perilous career choice.

In Mexico, a hotbed of gang wars, the drug trade and corruption, 15 media workers have died to date in 2022 alone, making it one of the most dangerous countries in the world for journalists operating outside of a war zone.

In his classes, while there is growing awareness and trepidation among students about the dangers, there’s also a willingness to confront them, Pearson said in an interview.

“I see a lot of resolve; I see people who are very committed to this work, and who want to do it in spite of what might come to pass,” he said – and they might be better able to handle online harassment than their older colleagues.

“In a strange way, they are actually more equipped to deal with online harassment than some older folks … this is the generation who has grown up with the idea of cyberbullying, with the presence of cyberbullying.”

Still, earlier this month, a coalition of Canadian media organizations wrote to urge Prime Minister Justin Trudeau to take steps to make it easier to investigate and prosecute those who target journalists online.

“This is a profound and spreading social harm that we cannot afford to ignore and that we must find ways to counter,” read the letter from the Canadian Association of Journalists.

Harassment was a particular concern for reporters in the field during the “Freedom Convoy,” a three-week blockade of Ottawa’s parliamentary district by protesters opposed to COVID-19 restrictions and vaccine mandates.

Pierre Poilievre, a veteran Conservative MP who openly courted the support of protesters in the early February days of his bid to lead the party, saw that strategy pay off over the weekend with a convincing first-ballot victory.

Whether he’ll continue to cultivate those connections remains to be seen.

In the meantime, journalists will press ahead, even if they find themselves as torn – as Pearson said he does at times – between an abiding passion for the work and the personal risk that can come with it.

“I would just implore any person with any political power to really think about the messages that they deliver to their supporters and the people who get vehemently behind them,” he said.

“And to really think about the ways in which we frame our hostility toward the media, and the responsibilities that they might have in doing so.”