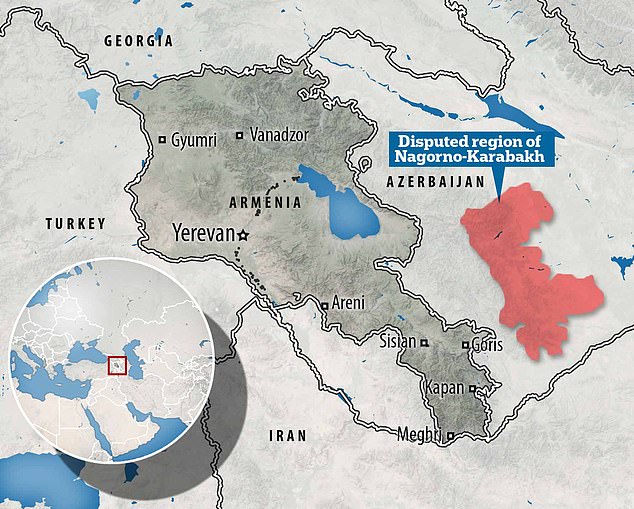 Azerbaijan has been accused of trying to invade its arch enemy Armenia as fighting erupted across the border last night with missiles and drone strikes reported in the former Soviet republic.

Both sides have blamed each other for the flare up amid claims Azerbaijan is targeting civilian infrastructure, with at least 49 Armenian soldiers killed, although figures are expected to be higher.

Russia, Armenia’s ally, previously brokered a ceasefire between the Caucasus neighbours in 2020 after six weeks of fighting saw 6,500 killed.

But with Putin distracted by his own savage war in Ukraine, Azerbaijan capitalised and struck while he is unable to offer any military aid or assistance to Armenia.

The Kremlin said in a statement today: ‘We express our extreme concern over the sharp aggravation of the situation in areas of the Armenian-Azerbaijani border.

‘We call on the sides to refrain from further escalation of the situation, exercise restrain and strictly observe the ceasefire.’

Footage circulating online appears to show a string of rockets being launched in the middle of the night into Armenia.

Azerbaijan said its forces were responding to Armenian provocation and denied claims that they were hitting civilian infrastructure.

The countries have been involved in a decades-long conflict over Nagorno-Karabakh, which is part of Azerbaijan but has been under the control of ethnic Armenian forces backed by Armenia since a separatist war there ended in 1994.

The countries have been involved in a decades-long conflict over Nagorno-Karabakh, which is part of Azerbaijan but has been under the control of ethnic Armenian forces 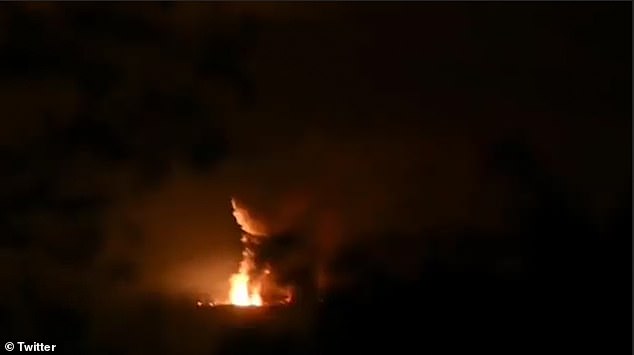 Armenia said that Azerbaijani forces ‘launched intensive shelling, with artillery and large-calibre firearms, against Armenian military positions in the direction of the cities of Goris, Sotk, and Jermuk’ shortly after midnight.

But Azerbaijan’s defence ministry accused Armenia of ‘large-scale subversive acts’ near the districts of Dashkesan, Kelbajar and Lachin on the border, adding that its army positions ‘came under fire, including from trench mortars’.

A ceasefire was agreed early this morning but it fell apart minutes later.

Today, Turkey sided with its ally and told Armenia to ‘cease its provocations’ and ‘focus on peace negotiations and cooperation with Azerbaijan’, Foreign Minister Mevlut Cavusoglu tweeted after a phone call with Azerbaijani counterpart Jeyhun Bayramov.

But Armenia has appealed for help from world leaders, saying early this morning: ‘Azerbaijani forces continue using artillery, trench mortars, and drones… striking military and civilian infrastructure. The enemy is trying to advance (into Armenian territory).’ 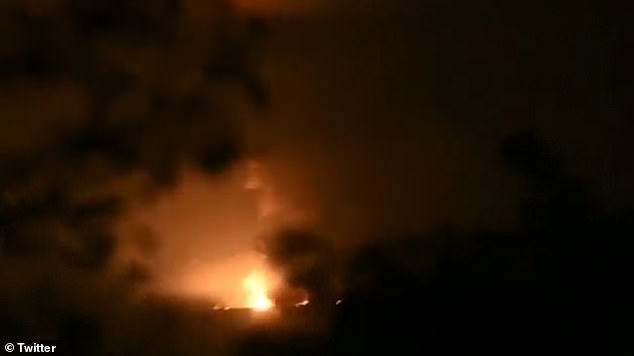 Pashinyan also discussed the escalation in tensions with the European Union’s Charles Michel.

Michel, president of the European Council, said the EU was ‘ready to make efforts to prevent further escalation’ and said there was ‘no alternative to peace and stability in the region,’ according to an Armenian readout of the call.

The United States called for an end to the conflict, with Blinken saying he is ‘deeply concerned’ over the situation, including ‘reported strikes against settlements and civilian infrastructure’ in Armenia.

‘As we have long made clear, there can be no military solution to the conflict,’ Blinken said in a statement. ‘We urge an end to any military hostilities immediately.’

Last week, Armenia accused Azerbaijan of killing one of its soldiers in a border shootout.

In August, Azerbaijan said it had lost a soldier and the Karabakh army said two of its troops had been killed and more than a dozen injured.

The neighbours fought two wars – in the 1990s and in 2020 – over the Nagorno-Karabakh region, Azerbaijan’s Armenian-populated enclave.

Ethnic Armenian separatists in Nagorno-Karabakh broke away from Azerbaijan after the collapse of the Soviet Union in 1991. 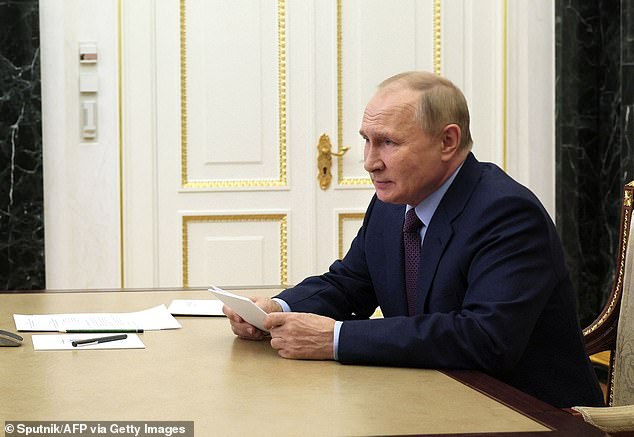 With Putin distracted by his own savage war in Ukraine, Azerbaijan capitalised and struck while he is unable to offer any military aid or assistance to Armenia

Under the 2020 ceasefire, Armenia ceded swathes of territory it had controlled for decades and Moscow deployed about 2,000 Russian peacekeepers to oversee the fragile truce.

During EU-mediated talks in Brussels in May and April, Azerbaijani President Ilham Aliyev and Armenian Prime Minister Nikol Pashinyan agreed to ‘advance discussions’ on a future peace treaty.

Ethnic Armenian separatists in Nagorno-Karabakh broke away from Azerbaijan when the Soviet Union collapsed in 1991. The ensuing conflict claimed around 30,000 lives.

Armenia’s security council gathered to invoke a mutual assistance and cooperation treaty with Russia which guarantees joint defence and military assistance in instances of aggression towards its signatories.

A statement read: ‘It was decided to officially appeal to the Russian Federation in order to use the provisions of the Treaty of Friendship, Cooperation and Mutual Assistance.’

It adds that Armenia will also turn to the Collective Security Treaty Organisation, the Russian-led security bloc, and the UN Security Council.