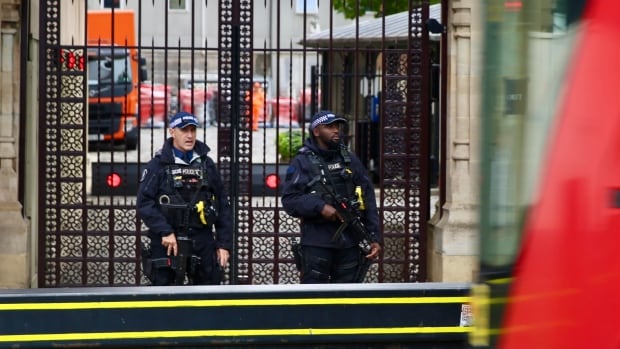 With hundreds of thousands of people expected to line the streets of London for a ceremonial procession on Wednesday, a former U.K. counter-terrorism co-ordinator warned that the security challenges around the Queen’s funeral are “enormous.”

In addition to the large crowds that will gather Wednesday when Queen Elizabeth’s coffin moves from Buckingham Palace to Westminster Hall — where the former monarch will lie in state until Sept. 19 — officials are dealing with the logistics of holding a funeral that will be attended by hundreds of world leaders and dignitaries.

“I think that is a different quantum of risk,” said Nick Aldworth, who held many top jobs during his three-decade career as a public security official, including head of security and policing at the British Parliament, managing security for the Queen Mother and firearms co-ordinator for the 2012 London Olympics.

Aldworth, who is now a private consultant, says the 2012 Games presented a major security challenge, but the Queen’s mourning period and state funeral is even more complex.

“The difference between the Olympics and this event is the Olympics are spread over three weeks,” Aldworth told CBC from his home in North Oxfordshire, England.

The U.K.’s current terror threat level is “substantial,” meaning that an attack is likely, and thousands of extra officers will be deployed for the events in London over the next six days.

Aldworth, who was appointed the U.K.’s counter-terrorism national co-ordinator in 2018, says the area where the Queen will lie in state already has semi-permanent security measures, like barriers to prevent vehicles from driving into crowds.

Many roads between Buckingham Palace and Westminster Hall have been closed off to traffic and metal fencing has been put up.

Great Britain has seen a series of deadly attacks, including IRA bombings in the 1980s and ’90s that in some cases targeted politicians and military personnel. More recent attacks include the 2017 London bridge attack and the Manchester arena bombing, but Aldworth says police also have a “long history of disrupting terrorism.”

“The reassurance that people should take is that this central footprint where most of the [mourning] activity is taking place will be incredibly well-protected,” he said.

Police have faced some criticism over the arrest of three people in Edinburgh for breaches of the peace, as they protested the monarchy while the Queen’s coffin was moved around Scotland.

Scotland took centre stage as Queen Elizabeth’s coffin arrived in Edinburgh, where it will lie at St. Giles’ Cathedral for the public to pay their respects. Many in Scotland have a deep fondness for the Queen, and keeping them happy with the monarchy will be one of King Charles’s biggest tasks.

After a man was questioned by officers in London for holding up a blank piece paper on which he said he wanted to write “Not my king,” the Met Police put out a statement saying that the public have a right to protest.

Aldworth says one challenge will be managing the transportation system, given how many people from outside central London are expected to descend on the area.

Transport for London (TFL), a local government authority, has warned that services will be busy and that some Tube stations could be closed in an effort to control crowds.

TFL says people going through Westminster Hall to walk past the Queen’s coffin will be subject to “airport-style” security screening and are not allowed to have any large backpacks.

Front of the line

People began to line up along the Thames River, across from Westminster Hall, for their chance to pay their respects to the Queen on Monday afternoon, 48 hours before the lying-in-state period begins in London.

Vanessa Nanthakumaran, 56, was the first person in line and plans to get through the two-day wait with the help of friends and even strangers who are bringing her food and warm drinks.

“We are being looked after well,” she told CBC, adding that she wanted to line up early because she has admired the Royal Family ever since she was a young girl growing up in Sri Lanka.

Nanthakumaran spoke while sitting on a small stool along the river, but organizers say starting Wednesday at 5 p.m. London time, the queue will keep moving, as mourners can file past the coffin 24 hours a day. People may have to wait hours in line, and organizers say they should expect to be standing most of the time.

On Tuesday evening, Grace Gothard, who was third in line, slept on the sidewalk beside the river, saying the only downside was the chilly night air.

“When there is something important in your life, you don’t mind doing it, whether it is hard or easy,” said Gothard, who moved to the U.K. from Ghana in 1985.

Beside her on a mattress lay a jar of marmalade with a picture of Paddington Bear, a reference to a viral video the Queen took part in during her Platinum Jubilee celebrations earlier this year.

The funeral will be held later that morning, at 11. It will be closed to the public but attended by family, heads of state and other foreign dignitaries.

Some media have reported on guidance that suggested that for logistical reasons, foreign dignitaries have been urged to fly commercial instead of by private plane, as Healthrow airport won’t be able to handle a surge of private flights. They are also reportedly being required to travel by bus en masse to Westminster Abbey for the funeral, instead of by private car, to cut back on the number of vehicles in central London.