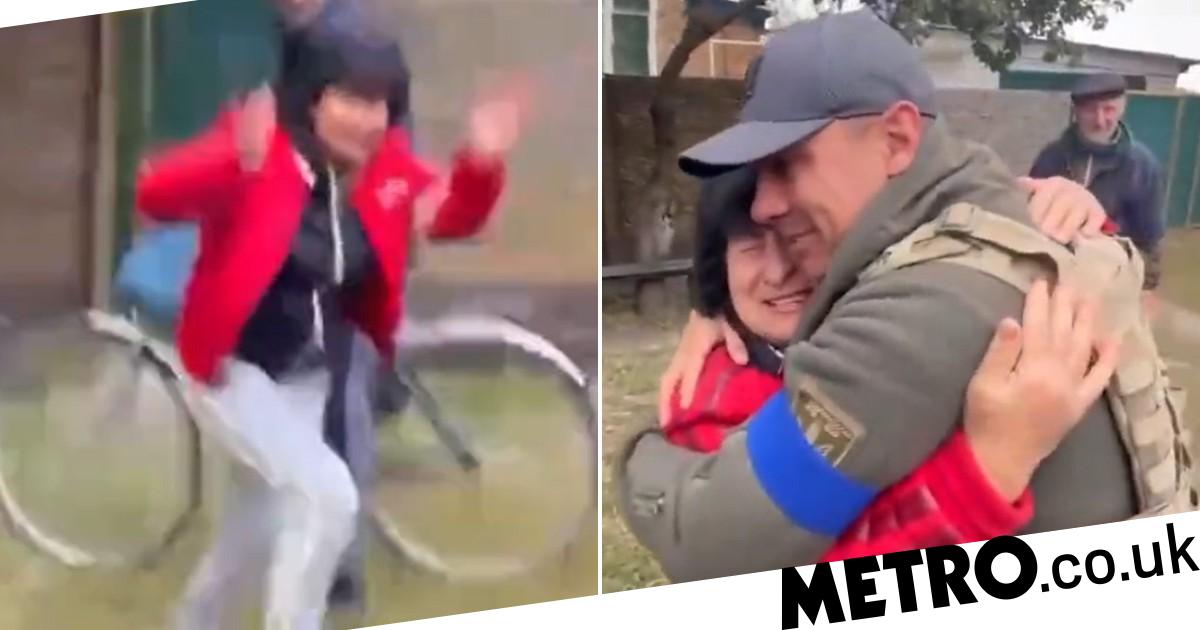 Heartwarming footage of a Ukrainian mother tearfully embracing her son has gone viral after he returned home to help liberate her village.

Kozacha Lopan, a village in the north-east Kharkiv region, was captured by the Russians in the early days of the war.

Yet in emotional scenes captured earlier today, Vyacheslav Zadorenko, mayor of the nearby Derhachi district, entered the village for the first time in six months after he and other members of the Ukrainian forces seized back control.

As he exits a vehicle, his mother can be heard screaming with joy and rushes towards him, smothering her son with hugs and kisses as she welcomes him home.

‘I knew you’d come home, one of my flowers bloomed,’ she said as she greeted her son.

‘I saved all your things, but the house is booby-trapped.

‘I cooked borscht, do you want some? I knew you’d free me!’

As more villagers emerged to greet their liberators, Mr Zadorenko’s mother reached out and embraced the soldiers accompanying her son as a sign of her appreciation.

Twitter user @jabutee shared the clip online with the caption: ‘that’s all great but did you ever liberate your own mama’s village.’

A further clip showed Mr Zadorenko later presenting guards with a ceremonial sword as a sign of gratitude for liberating the village and protecting its inhabitants.

‘Kozacha Lopan is and will be Ukraine,’ he said. ‘No “Russian World” whatsoever. See for yourselves where the “Russian World” rags are lying around. Glory to Ukraine, glory to the Ukrainian Armed Forces.’

Similar scenes played out across the Kharkiv Oblast this week as Ukrainian forces liberated over 300 settlements from Russian control as part of their ongoing counteroffensive.

As Ukraine continues its offensive campaign in the southeast, updates from Kyiv report Russian intelligence officers and commanders have fled the region, as occupying troops prepare to surrender en masse.

The Kremlin now appears to be attempting to get as many of its assets out of Crimea and the southern region as Ukrainian forces sweep the area.

Ukraine’s military of defence also claimed Russian officers and military commanders have begun to ‘urgently resettle their families’ back into Russian territory.

Elsewhere in Kharkiv, President Zelenskyy made a surprise visit to the recently recaptured city of Izyum today, which has been left devastated following the Russian army’s retreat from the region.

‘The view is very shocking but it is not shocking for me,’ Zelenskyy said as he surveyed the damage done to the region, ‘because we began to see the same pictures from Bucha, from the first de-occupied territories so the same destroyed buildings, killed people.’