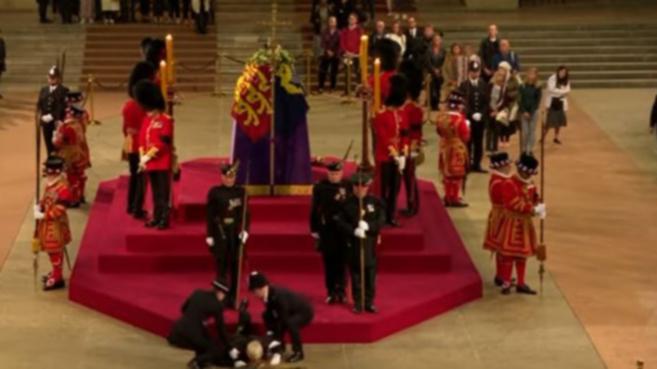 A royal guard holding vigil by the Queen’s coffin has collapsed from a podium at Westminster Hall as thousands of mourners filed past to pay their final respects to the late monarch.

The quiet ceremony for Elizabeth II, who is lying in state following her death on Thursday, was broken when the guard fell heavily onto the ground, drawing shocked reactions from those in the room.

Footage shared online showed the guard sway before tumbling forward off a step and doing little to break his fall on the stone floor.

SEE MORE IN THE VIDEO PLAYER ABOVE

Police officers quickly rushed to his aid and he was taken away for treatment. It is understood the man had earlier taken a moment away from the podium before rejoining at a changeover of sovereign’s bodyguards watching over the Queen around the clock.

Mourners from all walks of life have filed past the coffin of Queen Elizabeth through the night in London’s Westminster Hall.

After days of processions and ritual as the Queen’s body was brought to London from Balmoral, Scotland, where she died last Thursday at the age of 96, this was the opportunity for ordinary people to take a direct part in a ceremony.

Many were in tears as they passed by the flag-draped coffin.

Officials expect some 750,000 people to view it before the lying in state ends at 6.30am on Monday.

The line stretched back several kilometres along the south bank of the River Thames, past landmarks such as Tower Bridge and crossing Lambeth Bridge as it neared Westminster Hall.

Thomas Hughes, 20, who waited nearly 14 hours overnight with his brother, said finally viewing the coffin was quite overwhelming.

“You do it all because you want to pay respect to this lady … and when you put yourself through that, and then you get to the moment you’re waiting for, you are just that little bit more emotional,” he said.

Most in the queue were Brits but some were from overseas.

They were young and old, and included former soldiers bearing military medals and babies being carried by their parents. Many stopped by the coffin to bow their head. Others wiped away tears.

Queen Elizabeth’s coffin lay in the centre of Westminster Hall on a purple catafalque placed on a red platform.

It was covered by the Royal Standard flag and topped with the Imperial State Crown placed on a cushion, alongside a wreath of flowers.