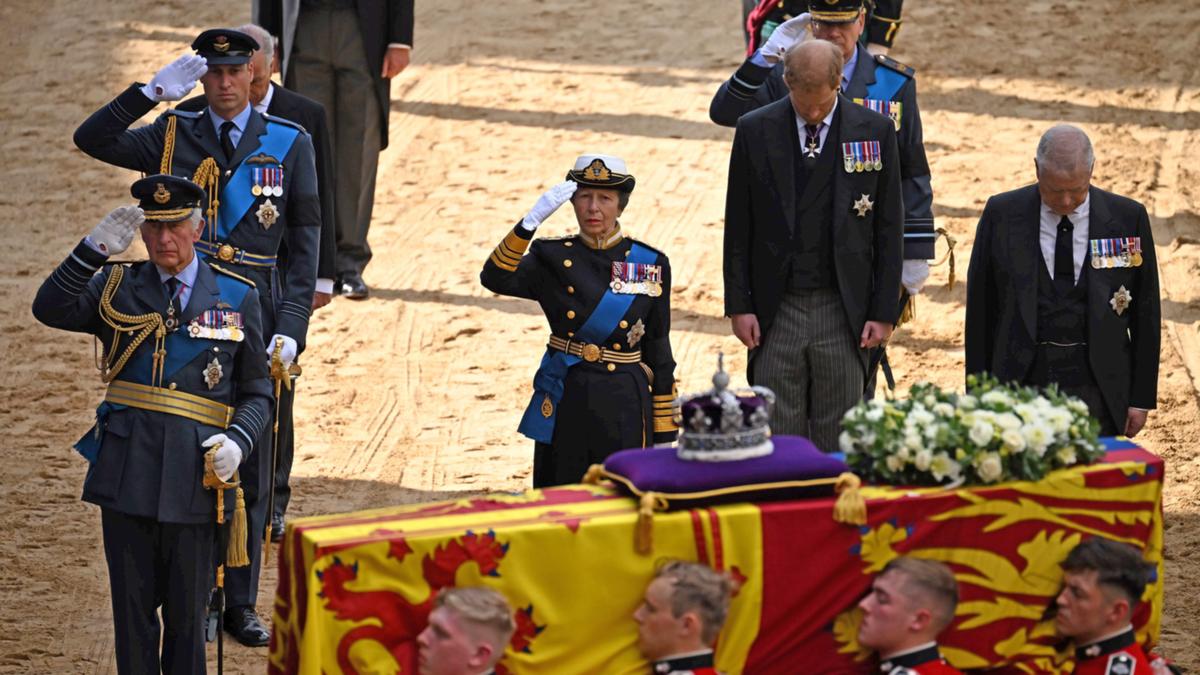 Removed of their rights to salute, Prince Harry and Andrew bowed their heads during the procession of the Queen’s coffin from Buckingham Palace to Westminster Hall.

The Duke of York – along with Prince Harry – were told he couldn’t wear his military uniform for the service, unlike other members of the family, including King Charles III and William, the Prince of Wales.

It was another public reminder of Andrew’s downgraded status after he was stripped of his military titles and patronages and removed from public life by the Firm for his connections to notorious paedophile Jeffrey Epstein.

Meanwhile, Harry, was banned from wearing military uniform due to his decision to step back as a senior royal and move to California with wife Megan Markle.

A powerful image captured Charles, William and Princess Anne in a stoic salute while Harry and Andrew bowed their heads with arms alongside in respect

The coffin was draped in the Royal Standard, with the Imperial State Crown on a velvet cushion with a wreath of flowers on top, and carried on a gun carriage of King’s Troop Royal Horse Artillery.

This week, controversial UK journalist Piers Morgan took a rare stance in support of Prince Harry, insisting he should have been allowed to wear his military uniform.

Taking to Twitter, Morgan told his 7.9 million followers the royals had made the wrong call by refusing to allow military uniforms to be worn by non-serving members of the royal family.

“Harry should be allowed to wear his military uniform. He earned it,” he said.

In response to the decision, a spokesperson for the Sussexes told how he would wear a morning suit to Monday’s funeral service.

“His decade of military service is not determined by the uniform he wears and we respectfully ask that focus remain on the life and legacy of Her Majesty Queen Elizabeth II,” the spokesperson said.