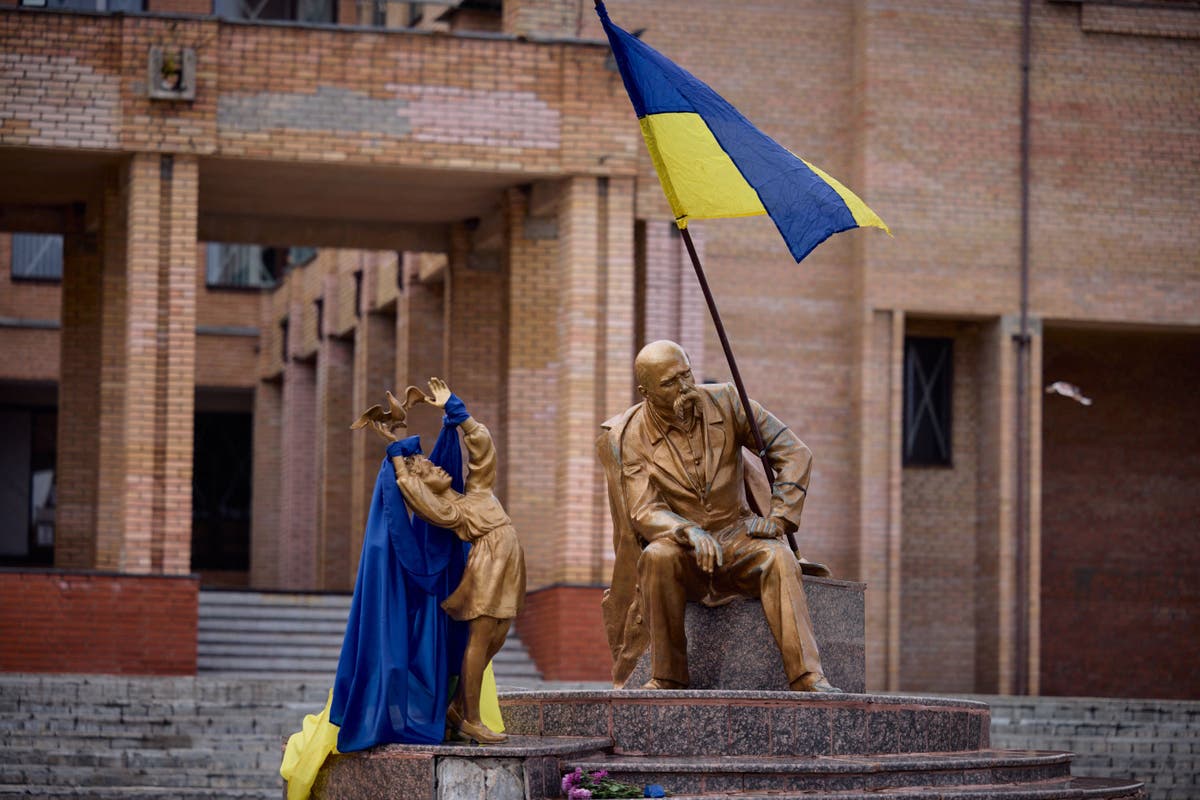 Ukrainian troops retook this town with surprising ease during their astonishingly fast advance, with the enemy putting up little resistance. But with liberation has come tales of killings and torture, a grim hallmark of Russian occupation in so many parts of Ukraine.

Balakliya was the first target liberated by Ukrainian troops in their sweeping and successful counteroffensive in the Kharkiv oblast, breaking through Russian lines.

President Volodymyr Zelensky visited Izyum, which had been the Kremlin’s main military stronghold in the area and was the main prize for Ukraine in the current phase of operations.

“The view is very shocking,” he said, “but it is not shocking for me because we began to see the same scenes from Bucha, from the first de-occupied territories.”

Balakliya has not suffered like Bucha, the town outside Kyiv that became a byword for Russian atrocities. But there are accounts of executions, beatings, looting and arbitrary arrests. Ukrainian investigators have arrived to search for evidence of war crimes as well as to hunt down alleged collaborators.

Five corpses have been found of people who were killed. Two were shot dead at a checkpoint three days before Ukrainian forces arrived. Residents buried the bodies, which had been dumped at a roadside. They have since been exhumed and taken to the regional capital, Kharkiv.

Between 40 and 300 civilians were held at the local police station at various times, some for weeks on end. Half a dozen small, dimly lit holding cells were used for interrogation. This involved multiple counts of torture, said Ukrainian investigators, one of them pointing to dark splotches on walls.

Nicolai was among those dragged to the police station after being accused of secretly helping Ukrainian forces.

“They first came to my house looking for a neighbour who they said was a spy. I told them he and his family had left a long time ago, and that was the truth”, said the 42-year-old. “But they came back the next day, they said I was in conspiracy with my neighbour and took me off to the police station.

“I kept on telling them they were mistaken. Firstly it was slaps, then a young man came in and the real beating began. They punched me in the face. Then they pulled me up from the chair I was sitting in and started punching me in the stomach – it went on for a long time. They kept showing me photos of people I didn’t know. They eventually took me back to the cell with the others. I started pissing blood when I went to the toilet.

“I had one more session of beating the next day, but they must have realised there was nothing I could tell them. I was released after four days and went to the local hospital for treatment for injuries; they found I had a broken rib.”

He added: “I am very glad we are now back in Ukraine again, I am sure our soldiers are doing so well, they will keep taking back our land,” said Nicolai, who did not want to give his family name “ in case the Rashists [Russians] came back.”

Serhiy Bolvinov, chief of investigations for Kharkiv, said: “We are investigating a number of cases including the two people killed at the [checkpoint]. We have discovered bullet holes in the bodies. The inquiries will continue; we think we shall find other cases, unfortunately.”

Ukrainian officials claim that a network of collaborators helped the Russians and vowed to track them down. A Ukrainian intelligence service (SBU) official said: “This is a pattern we have seen since the invasion. They have people in place before they move in. Some of them would have fled with the Russians, but others would still be here.”

Yuri Husak, who has lived in the town for 38 of his 51 years, said: “We have around 27,000 people living here. Strangers are noticed, so the collaborators must have been local people. I have heard there were collaborators here, but they would not be hanging around, they have gone. And anyway, they couldn’t help the Russians keep this place in the end.”

The memories many in Balakliya will hold of the Russians will be of an army demoralised and disorganised – disappearing, at the end, in a chaotic retreat, abandoning weapons. Twisted skeletons of tanks and armoured cars hit by Ukrainian fire lie on the routes in and out of the town.

“At the end, the Russians were hiding in offices, in peoples’ houses, in gardens. They were not putting up a fight, they were just trying to get away. They were running between the rockets and cannons our side was firing”, said Svetlana Volkova. “ One group had to turn back after one of the bridges they wanted to use was blown up. There was a lot of confusion.”

Ms Volkova, 73, saw that a lot of the Russian soldiers were quite young. “They lived in their barracks but I talked to a few of them when they came to the centre. Some of them were so young I used to say to them, ‘What are you doing here? You should be at home with your family!’ A few said they wished they were. They had been ordered to come.

“I am a grandmother, some of them looked the same age as my grandsons. I did not want to see them die. I don’t blame them, I blame Putin for sending them here. What is the point of killing off the young people of your country?”