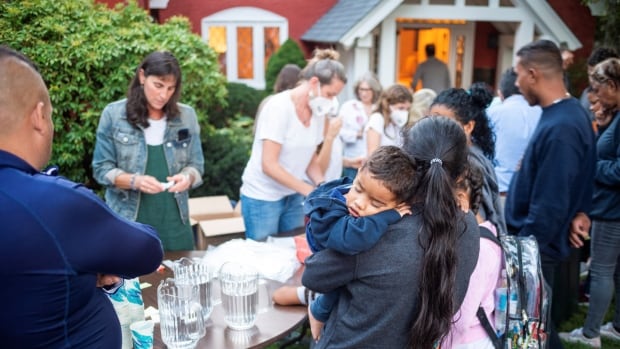 A group of immigrants landed on the wealthy Massachusetts island of Martha’s Vineyard on Wednesday, part of a campaign by Republican governors to shift the immigration burden to Democratic areas.

Florida Gov. Ron DeSantis took credit for the arrival of two planes of immigrants, one spokesperson told Fox News and a second said on Twitter.

The website showed video of people getting off a plane and boarding a van. It said the video depicted the immigrants who had been sent from Florida.

The Florida legislature appropriated $12 million US to transport the migrants from the state consistent with federal law, Fenske said.

Border states Texas and Arizona since the spring have sent thousands of immigrants to cities such as New York, Chicago and Washington. While officials and activists in those cities have mobilized to help the migrants seek shelter, care and education for their children, Washington, D.C., Mayor Muriel Bowser declared a public emergency over the development, which allows the city to establish a new office of migrant services.

Martha’s Vineyard is distinct from those cities in that it is a summer vacation destination and farm area with a year-round population of only 20,000. Business activity and job opportunities are greatly reduced in the winter months, and it has a higher cost of living than many cities.

Massachusetts Gov. Charlie Baker, a Republican, said he was in touch with local officials and that short-term shelter was being provided.

Our island jumped into action putting together 50 beds, giving everyone a good meal, providing a play area for the children, making sure people have the healthcare and support they need. We are a community that comes together to support immigrants. <a href=”https://t.co/kG5bglhbLe”>pic.twitter.com/kG5bglhbLe</a>

Massachusetts state representative Dylan Fernandes said on Twitter that immigrants had arrived without warning from Texas.

“Many don’t know where they are. They say they were told they would be given housing and jobs. Islanders were given no notice but are coming together as a community to support them,” Fernandes, a Democrat who represents Martha’s Vineyard, said on Twitter.

Democrats were also critical in Florida, with state senator Anna Eskamani accusing DeSantis of scoring “political points for his base” and tweeting that the practice “continues to demonize already vulnerable communities.”

States cannot compel immigrants to move, so their consent is needed. Some accept because the journey takes them closer to their intended destinations, although a report on MassLive.com on Wednesday said many Venezuelan and Colombian immigrants who had arrived in Martha’s Vineyard were unaware of where they had landed.

U.S. border agents have made a record 1.8 million migrant arrests so far in fiscal year 2022, with many attempting to cross multiple times, creating humanitarian challenges and political liabilities for President Joe Biden ahead of the Nov. 8 midterm election. It’s an issue Republican politicians and conservative media outlets have been highlighting.

Of those apprehensions at the southwest border, nearly a quarter were from Cuba, Nicaragua and Venezuela, up from eight per cent in 2021 and three per cent in 2020.

Most migrants from Cuba, Nicaragua and Venezuela who cross into the United States are allowed to stay to pursue asylum claims, since they are difficult to deport due to frosty diplomatic relations with their respective governments.

The sheer numbers have seen U.S. border officials in El Paso, Texas release hundreds of migrants on city streets near shelters and bus stations to ease overcrowding at their facilities.

Many of the Venezuelans arriving have no family members or sponsors, further straining charity and government agencies that assist them, said Mario D’Agostino, El Paso’s deputy city manager.

The Biden administration is quietly pressing Mexico to accept more migrants from Cuba, Nicaragua and Venezuela, seven U.S. and three Mexican officials told Reuters in a report published on Wednesday.

Secretary of State Antony Blinken raised concerns about an escalating number of crossings by migrants from the three countries during a visit on Monday to Mexico City, two U.S. and two Mexican officials told Reuters, but Mexico did not promise any specific actions.

The Biden administration has also publicly sought to end the health order, known as Title 42, which was issued in early 2020 under former Republican president Donald Trump as COVID-19 first began to rage. The order allows U.S. border authorities to rapidly expel migrants to Mexico or other countries without the chance to seek U.S. asylum.

A federal Trump-appointed judge in Louisiana blocked the administration from ending the order earlier this year, even as U.S. health officials said it was no longer needed given the current state of the pandemic.

Advocates and many Democrats fiercely oppose Title 42, saying it encourages frequent crossing attempts between ports of entry as migrants aren’t then funnelled into the refugee system. They also say it exposes them to dangerous conditions in Mexico, including kidnapping and extortion.

Over 50 migrants died earlier this year in Texas, found in a sweltering tractor-trailer.

Meanwhile, an increase in the past year of attempts by migrants to reach the U.S. by water from the Caribbean as also been noted by officials and immigration think-tanks.