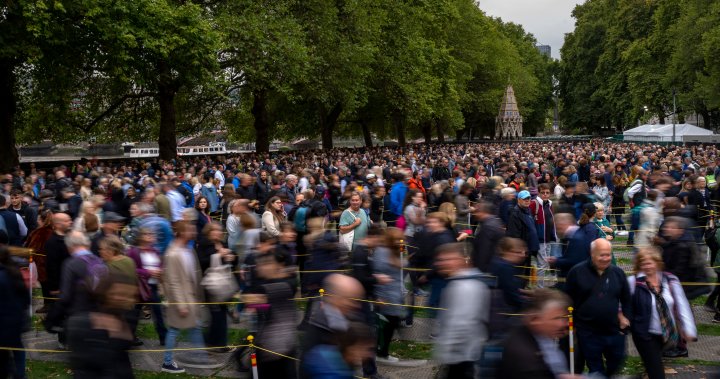 Hundreds of thousands of people are expected to pass through Westminster Hall over the coming days to pay respects to Queen Elizabeth II as she lies in state.

Elizabeth, who died Sept. 8 at the age of 96 after 70 years on the throne, will lie in state in London until Monday morning, the day of her state funeral. Mourners have been able to pay their respects since Wednesday.

Members of the public have been waiting in long lines to pay their respects to the queen. At one moment on Thursday morning, the line was reported to be almost seven kilometres long. It snaked along the south bank of the River Thames and then over a bridge to Parliament.

Why are mourners waiting in such long lines to see the queen? Here’s what they’ve been saying.

“Everybody in the crowd was impeccably behaved. There was no malice, everybody was friends. It was fantastic,” said Keith Smart, an engineer and British Army veteran. He told The Associated Press on Thursday he waited more than 10 hours for the chance to say his goodbye.

“And then, to come into that room and see that, I just broke down inside. I didn’t bow — I knelt to the floor, on my knees, bowed my head to the queen.”

The display of mass mourning is an enormous logistical operation, with a designated 16-kilometre route lined with first aid points and more than 500 portable toilets. Mourners are being given coloured wristbands, which are numbered and allow them to briefly leave the queue to use the washroom or get food and drink.

There are 1,000 stewards and marshals working at any given time, and 30 religious leaders from a range of faiths to stop and talk to those in line.

“Obviously, it’s quite difficult queuing all day long, but when you walk through those doors into Westminster Hall, that marvellous, historic building, there was a great sense of hush and one was told you take as much time as you like, and it’s just amazing,” Chris Bond, who is from Truro in southwest England, told The Associated Press on Wednesday. He also attended the lying-in-state of the queen’s mother in 2002.

“We know the queen was a good age and she served the country a long time, but we hoped this day would never come.”

“To give up my day queuing is nothing compared to what she’s done for 70 years,” Gina Carver told The Associated Press on Wednesday. She is from Tunbridge Wells in southern England.

“I have 1,001 emotions when I see her,” said Chris Imafidon, who was sixth in line when he spoke to The Associated Press early Wednesday.

“I want to say, God, she was an angel, because she touched many good people and did so many good things.”

“We’ve lost someone special,” a tearful Kenneth Taylor told Reuters on Wednesday. The 72-year-old stayed overnight in a tent to be one of the first in the queue.

“Her service to this country was really steadfast and unswerving. And she’s probably what I would call the queen of queens.”

“She’s given 70 years of her life to us. I’m sure I can give 24 hours of mine, just give that respect to her,” 59-year-old Mark Bonser, from Doncaster in northern England, told Reuters on Wednesday.

The queen was “everybody’s second mother.”

— with files from The Associated Press and Reuters