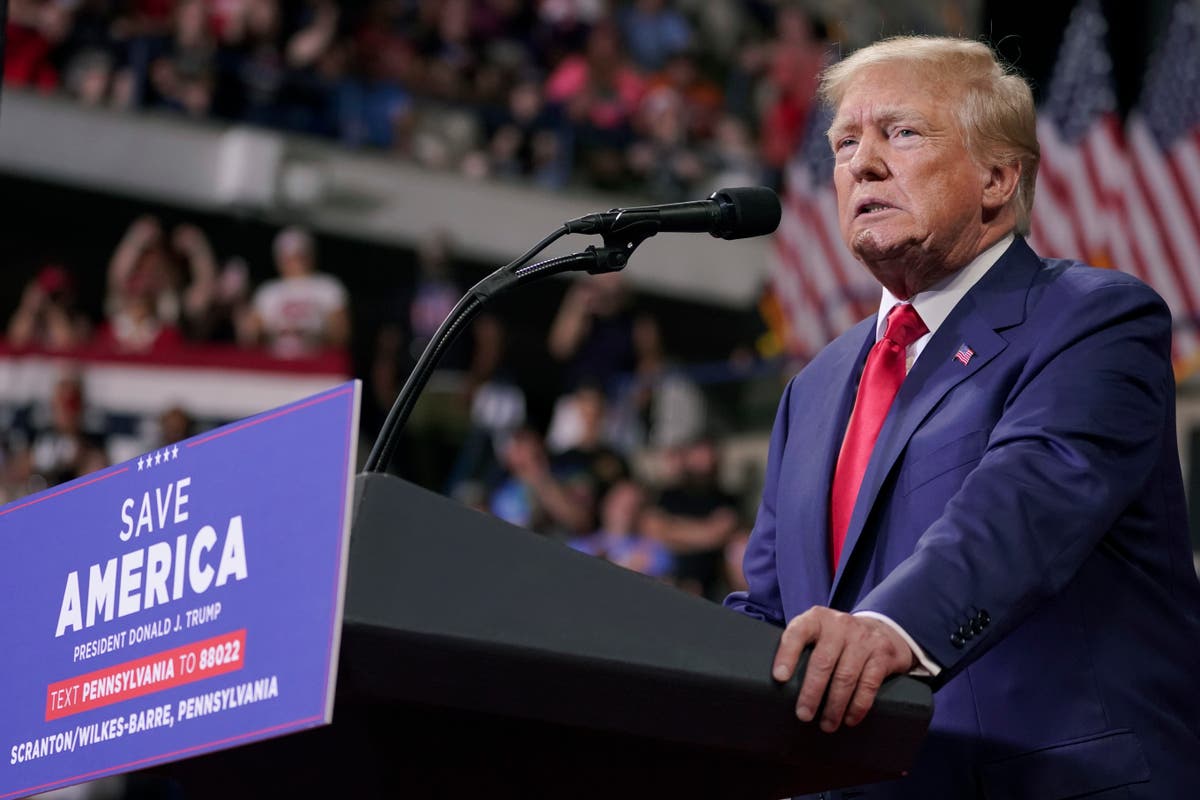 Former president Donald Trump on Thursday hinted that his supporters could engage in a protracted campaign of violence if he were to be indicted for any crimes discovered in the myriad criminal investigations into his conduct.

Speaking on the conservative broadcaster Hugh Hewitt’s radio show, Mr Trump said an indictment would not deter him from running for president because he would have “no prohibition against running”.

“But I think if it happened, I think you’d have problems in this country the likes of which perhaps, we’ve never seen before. I don’t think the people of the United States would stand for it,” he added.

Asked what kinds of problems he was predicting if he were to be charged with a crime, Mr Trump added ominously: “I think you’d have big problems — big problems”.

“I just don’t think they [his supporters] would stand for it. They will not,” he said. “They will not sit still and stand for this ultimate of hoaxes”.

Mr Trump added that he was “totally innocent,” and when he was asked how he’d respond to accusations that his comments would stoke violence, he replied: “I’m just saying what my opinion is — I don’t think the people of this country would stand for it”.

At the present time, there are at least three separate grand jury investigations looking into the twice-impeached former president and his allies.

Two of the investigations stem from Mr Trump’s push to remain in office against the will of voters after he lost the 2020 election.

One of those is a federal probe being overseen by the US Attorney for the District of Columbia, which is looking into both Mr Trump’s actions relating to the 6 January 2021 attack on the Capitol and his role in causing forged electoral vote certificates to be sent to the National Archives from GOP activists who purported to be legitimate electors despite their states having been carried by Joe Biden, Mr Trump’s 2020 election opponent.

Another District of Columbia grand jury is investigating Mr Trump’s alleged hoarding of stolen government documents which were by law meant to be returned to the National Archives when his term ended in January 2021. An 8 August search of the ex-president’s Florida home and office uncovered more than 11,000 documents belonging to the government in boxes he’d been keeping in a storage room, with roughly 100 of those bearing markings at classification levels as high as “top secret”.

Mr Trump is currently fighting in a Florida federal court to keep the FBI from accessing those documents until a third-party special master has reviewed them to determine whether any are covered by attorney-client privilege.

The third grand jury probe is a state investigation being overseen by the Fulton County, Georgia district attorney, Fani Willis.

Ms Willis’ office is looking into whether Mr Trump or his allies violated Georgia election laws by trying to pressure state officials into overturning his 2020 election loss.