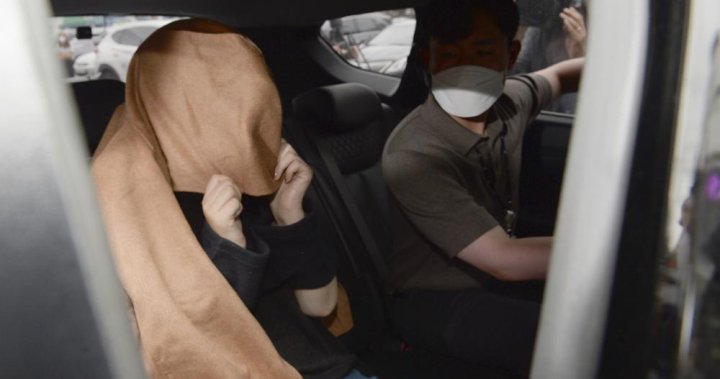 NOTE: This article contains descriptions that are disturbing. Please read at your own discretion.

Police in South Korea have arrested and charged a woman with the murder of what are believed to be her two children whose remains were found inside abandoned suitcases in New Zealand last month.

The 42-year-old Korean-born New Zealand woman is suspected of fleeing to South Korea in 2018 after allegedly killing her then seven-year-old and 10-year-old children in Auckland, authorities said.

“I did not do it,” she told reporters as she was escorted from a police station in the southeastern city of Ulsan.

The woman, who has not been identified by authorities, covered her face with the hood of her coat as officers escorted her outside an Ulsan police station and put her in a car headed for Seoul, where she was expected to be questioned by prosecutors.

In a case that shocked the country and made headlines worldwide, the bodies were discovered in early August after a family bought the contents of an abandoned storage unit in Auckland, sight unseen.

According to the BBC, the bodies were believed to have been stored for a few years.

At the time of the discovery, neighbours said that they immediately began to smell a strong, rotten odour coming from the contents of the locker, which the unsuspecting family had brought back to their yard on a trailer.

“I could smell it here. I thought it was a dead cat or something. That day Thursday (before the police came),” an unnamed neighbour told the New Zealand Herald, adding that as a pig hunter he is very familiar with the smell of animal decay.

The family who found the bodies were not connected to the deaths.

Kangaroo shot after killing owner, blocking medics from reaching him

NPR reports that the woman charged remains in South Korea and faces a review at the Seoul High Court over whether she should be extradited to New Zealand. That review must take place within the next two months.

Det. Insp. Tofilau Fa’amanuia Vaaelua with the New Zealand police told The Guardian that the investigation was “challenging” and distressing.

“No matter how long or how many years you serve and investigate horrific cases like this, it is never any easier to do,” he said.

— With files from Reuters