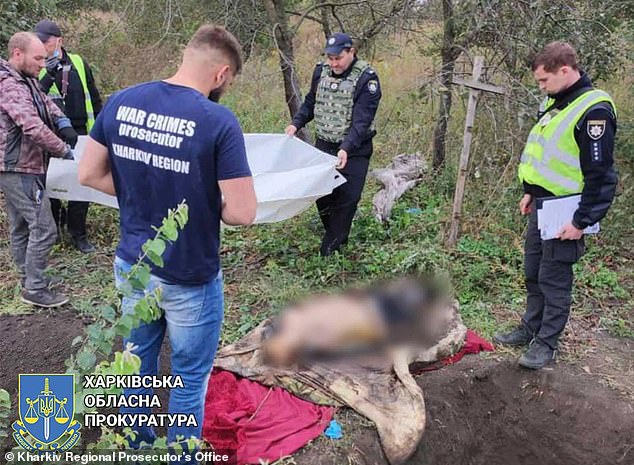 Horrifying tales of mass murder, torture, rape and mutilation at the hands of Russian troops are being uncovered in newly-liberated parts of Ukraine in chilling echoes of their retreat from Kyiv.

At least 1,000 civilians died in the city of Izyum alone, according to multiple Ukrainian officials, while others were left to suffer from wounds inflicted by Russian troops who destroyed all the hospitals and looted medical supplies.

Those who survived the occupation in places such as Balakliya and Kupyansk tell of torture chambers set up in basements, rapes and mutilations carried out by Putin’s men – some indiscriminately, others while trying to root out those loyal to Ukraine.

The names of these cities will now live in infamy alongside the likes of Bucha and Irpin – suburbs of Kyiv where some of the first evidence of Russia’s bloody campaign of violence against innocent bystanders was first uncovered after the retreat in April.

More than 450 people are known to have died near Kyiv, meaning that the scale of atrocities in Izyum and across Kharkiv occurred on a much larger scale.

Ukrainian war crimes investigators examine the body of a civilian discovered in the village of Zaliznychne, in the Kharkiv region, who locals say was tortured and killed by Russian troops 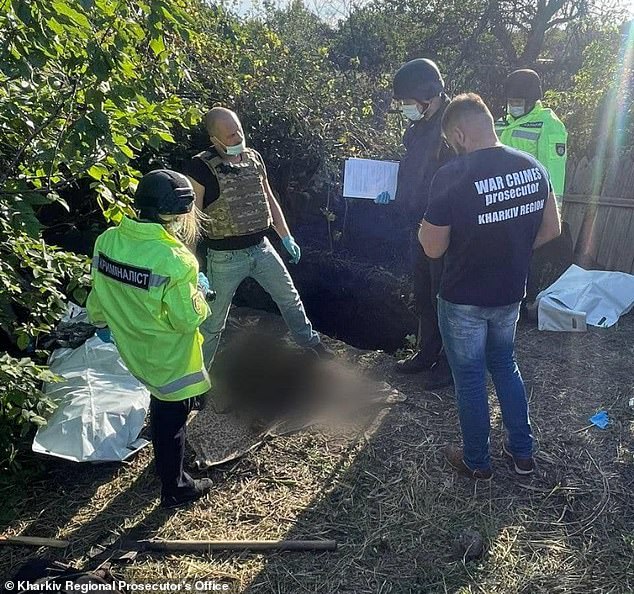 Maksim Strelnikov, president of the Izyum city council, said: ‘The occupiers here, as in other places, committed war crimes and tried to hide them.

‘According to the information that we have, 1,000 civilians at minimum were killed as a result of military actions.

‘Unfortunately, many more people have suffered because they lacked access to timely medical care.’

Mr Gerashchenko, on a visit to the region yesterday, added: ‘Right now, being in Kharkiv, I feel joy and anger.

‘Joy that hundreds of thousands of Ukrainians are now free. Anger that so many lives were destroyed, so many people were killed, tortured, raped.

‘That infrastructure and factories were destroyed. Russia must pay for it.’ 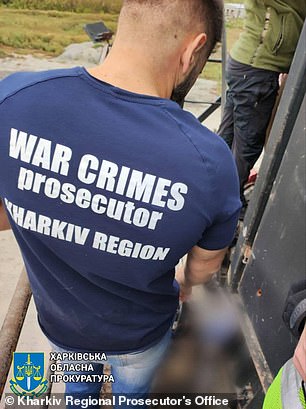 1,000 civilians have died in the city of Izyum alone under Russian occupation, Ukrainian officials say

Ukraine’s state prosecutor has sent more than two dozen teams of investigators into the more-than 3,000 square miles of territory that Ukraine re-took from Russia in a lightning offensive that began last week.

So far, investigators have uncovered the bodies of at least six civilians they say were killed by the Russians.

In the village of Hrakove, locals led investigators to the graves of two young men they say they were forced to bury by Russian soldiers.

Investigators have exhumed the bodies and say they bear signs of torture and summary execution.

Each has a gunshot wound to the back of the head. Their ears had been cut off.

In the village of Zaliznychne, locals led Ukrainian troops to four graves they said contained the bodies of their neighbours who were killed by Putin’s men.

Three had been buried in their gardens, the fourth inside a tarmac plant opposite the local railway station. Prosecutors say all bear signs of torture.

Oleksii Kashporovskyi, a Ukrainian journalist-turned-soldier, told news site TSN of the atrocities he witnessed while liberating the town of Bohorodychne.

Kashporovskyi said he found the bodies of several Ukrainian soldiers who had been beheaded and were barefoot alongside the corpses of ten civilians.

The only two civilians left alive in the village were a 93-year-old woman and her 60-year-old son, who told how the Russians had shot another of her sons and his wife.

She showed Ukrainians to the spot behind her house where she buried the bodies. 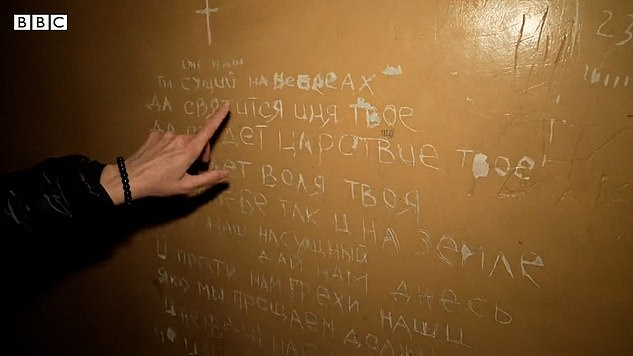 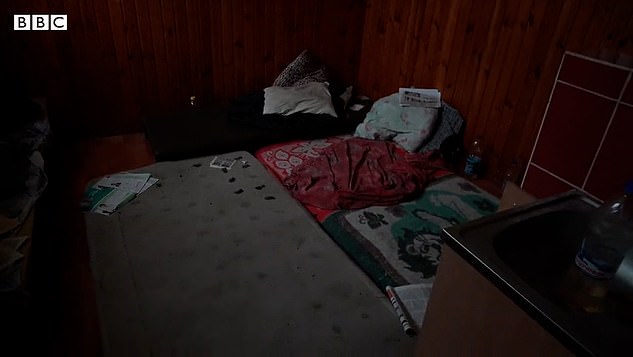 Yulia Petrova, a vet from the city of Kupyansk, told news site Meduza of her life under Russian occupation until she managed to flee last month.

She said Russian troops established torture chambers in the basements of buildings that ‘inhuman screams’ could be heard coming from – both men and women.

Villagers were encouraged to inform on anyone with pro-Ukraine views – including their family and neighbours – who were then kidnapped.

Some emerged from the basements unable to stand or walk after being tortured. Others were never seen again.

Local fishermen told how they found a body floating in a nearby river with its hands tied and its head in a sack.

They informed the local Russian commander, and soldiers took the corpse away without saying anything about it.

Other times, drunk Russian soldiers would approach civilians at random on the street and threaten to shoot them.

Yulia explained how she decided to flee after somebody informed on her for having pro-Ukraine views, prompting a visit from the occupiers.

She said troops burst into her house, searched it for Ukrainian flags or symbols, went through her phone and – when they couldn’t find anything – pointed a loaded gun at her nine-year-old daughter’s head in an attempt to extract a confession.

Yulia fled the next day, catching a ride in a friend’s car and bribing her way through checkpoints until she reached Ukrainian territory.

That account tallies with BBC reporters who went to the city of Balakliya and were shown what the Ukrainians say was a basement torture chamber. 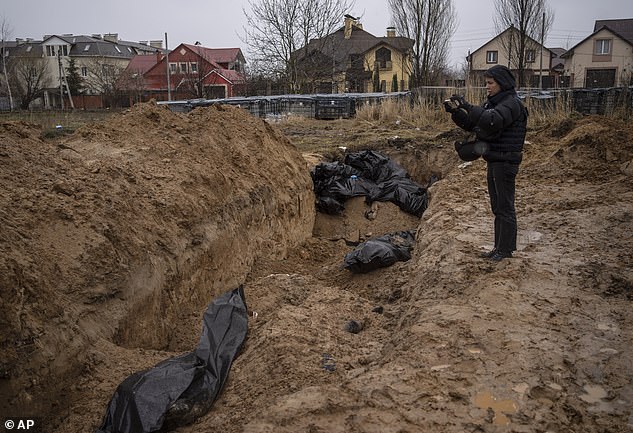 The fresh atrocities echo those committed in Bucha and Irpin earlier in the war, when at least 458 civilians died under Russian occupation (pictured, a mass grave)

Russian troops used the lower floors of the police station to detain anyone they suspected of being part of the army or government, where they were brutalised.

Up to eight men were held for weeks on end in cells designed for just two or three people while they were questioned, often while being electrocuted.

Locals say the Russians turned off the building’s noisy ventilation system during the torture sessions so the screams of the victims could be heard outside.

The tactics are exact copies of atrocities inflicted on the towns of Bucha and Irpin, which were occupied by Russian forces between February and April.

Local investigators and international observers have documented summary executions, enforced disappearances and torture which amount to war crimes and possibly crimes against humanity.

In total, 458 people are known to have died in Bucha and Irpin – many of them rolled into mass graves that were later exhumed by Ukrainian forces.

The discovery of the atrocities sparked international condemnation of Russia’s war effort and a groundswell of support for Ukraine.

Zelensky and several other world leaders branded them crimes against humanity and called Putin a war criminal, vowing to bring all those responsible to justice.

Since then, Ukraine says it has identified many of the soldiers and their commanders who were in the area at the time and has published their details online.

Russia continues to deny that its forces are deliberately targeting civilians.