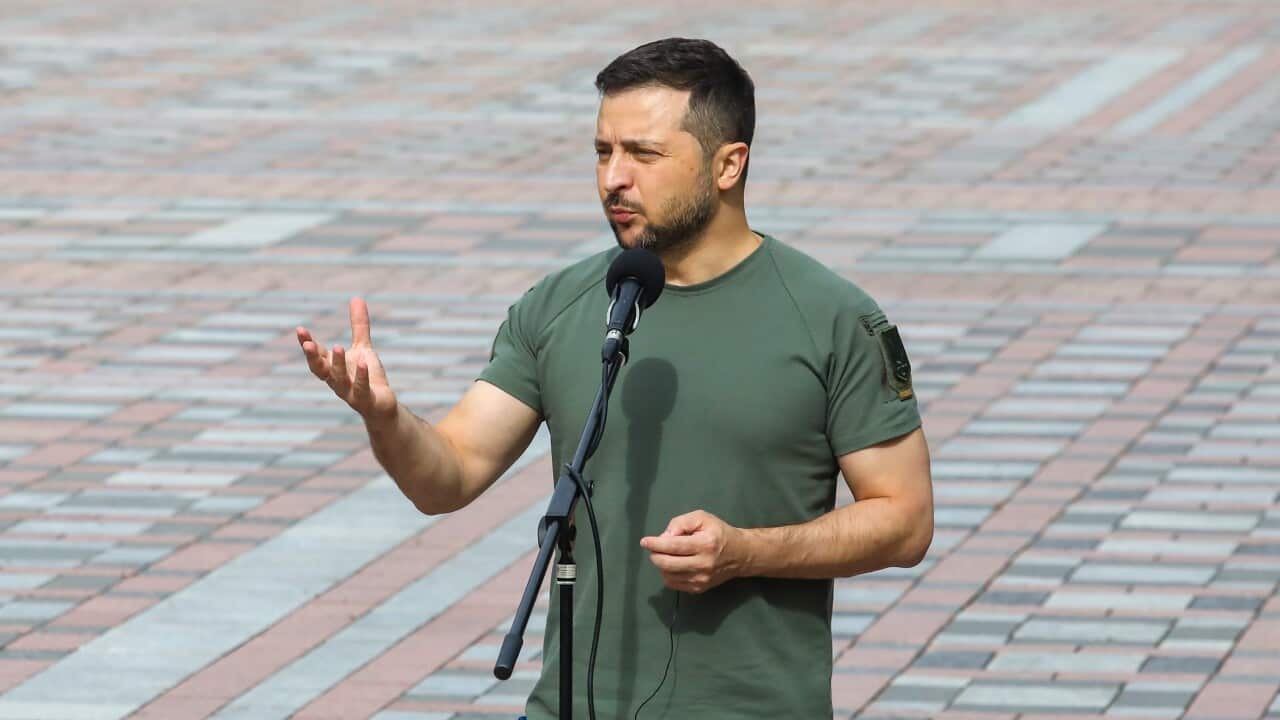 Russia’s recent losses in Ukraine are “a major breakthrough” for Ukraine and could lead to “a catastrophic domestic situation in Russia”, experts say.
According to Ukrainian President Volodymyr Zelenskyy, Ukrainian forces have recaptured about 8,000 square kilometres of Russian-controlled Ukrainian regions.
About half that area had been made secure and “stabilisation measures are still ongoing” in the other half, Mr Zelenskyy said on Tuesday.
US President Joe Biden agreed.
Ukraine has made significant progress as it pushes back Russian forces, he said on Tuesday.

According to the reports, most of the recaptured area is in the northeastern region of Kharkiv. A map of the Russian invasion of Ukraine, showing Russian and Ukrainian positions this week.

He told SBS News Ukrainian forces have pulled off an incredible operation.
“It looks like Ukraine managed to secretly bring several military brigades to the northeastern province without Russians noticing,” Dr Petrov said.

“Military equipment also has been somehow transported and not detected by Russian troops,” he said.

John Blaxland is a professor of International Security and Intelligence Studies at Australian National University.
He told SBS News Ukraine’s recent wins will shatter the morale of the Russian forces.
“This is a major breakthrough. Quite a success for Ukrainian forces and an incredible morale blow for the Russians, who have fought over the last few months to gain this territory that they have lost in a matter of days,” Professor Blaxland said.
“It’s quite an extraordinary turnaround from what we saw a few months back,” he said, referring to Russia’s invasion of Ukraine, which started on 24 February.

At the time, Russian President Vladimir Putin referred to the invasion as “a special military operation”.

Professor Blaxland said while the invasion has been debilitating for Ukraine, it hasn’t been as successful as Mr Putin would have liked it to be.
“And this turnaround in the last week speaks to a hollow campaign plan from Russia, lacking in morale, lacking in leadership, lacking in applied professional military skills,” he said.

According to Dr Petrov, the recent events have put Mr Putin in a perilous position.

“Putin is now under attack from both sides,” he said.
“One group of his critics believe that he’s too soft – that he should have used nuclear weapons against Ukraine within days or weeks into the war.

“And the other group of critics believe Putin has been too cruel and unnecessarily brutal in dealing with brothers and sisters in Ukraine.”

How long will the war last

While Ukraine has scored a tremendous victory in the past few days, the war in Europe is far from over, Professor Blaxland said.
“The Ukrainians have been remarkably successful, but sustaining the tempo of operations becomes harder the further away you go from your standpoint,” he said.
“The logistics, the supply of ammunition, of fuel, of water [gets] attenuated.
“And you [also] face the risk of being counter-attacked.

“So while there are a lot of people hoping that the Ukrainians will continue to press on, it gets more difficult the further east you go.”

“So that the effects of the cut off of oil and gas will affect the people in Europe the most and he’s banking on their morale being sapped by enduring a bitter and cold winter without heating.”

Is Vladimir Putin’s leadership under threat?

While the experts agreed on most fronts, they differed when asked if the recent events in Ukraine could dislodge Mr Putin from his position in Russia.
Dr Petrov said Russia’s primary goal was to “demilitarise” Ukraine but since the start of the war, with support from the West, Ukraine has gone from strength to strength.
“All the goals Putin put as sensible reasons to start this war have completely turned into a disaster in both military and economic way,” he said.

“So I believe [Putin] cannot survive for very long in the current situation.”

But Professor Blaxland disagreed.
“Putin is a ruthless man. He quite happily dismisses and removes political adversaries or people he considers incompetent,” Professor Blaxland said.
“We’ve seen this with the sacking of generals. We’ve seen this with the dismissal of people close to him who have dared to cross the line.
“And I don’t see yet signs of a significant wave of pushback to Putin’s leadership.”

Irrespective of how long the war or Mr Putin’s leadership would last, the experts agreed that Europe is in for a long and bitterly cold winter.