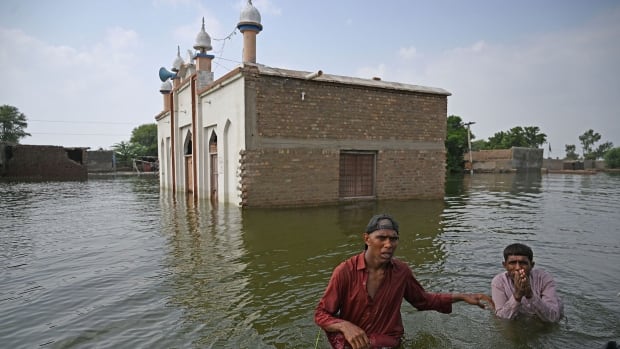 Our planet is changing. So is our journalism. This weekly newsletter is part of a CBC News initiative entitled “Our Changing Planet” to show and explain the effects of climate change. Keep up with the latest news on our Climate and Environment page.

Sign up here to get this newsletter in your inbox every Thursday.

What On Earth54:02Who pays for the cost of climate catastrophe in Pakistan?

This week, we ask what role Canada needs to play in providing aid to Pakistan as it confronts an ongoing climate hazard. And, a documentary about how the world helped mend the ozone layer, and what lessons it holds for today’s climate crisis.

As Pakistan copes with the impacts of extreme flooding, leaders in the developing world want to make financial assistance for such devastation a key topic at the upcoming global climate conference, COP27, in Sharm El-Sheikh, Egypt.

Record monsoon rains since mid-June, along with glacier melt caused by warmer-than-usual spring temperatures, caused massive floods in Pakistan that have killed at least 1,400 people and destroyed millions of homes.

“The impacts of climate change are becoming more serious,” Munir Akram, the ambassador and permanent representative of Pakistan to the United Nations, told What On Earth host Laura Lynch.

Akram, who is also the chair of the Group of 77 developing countries (G77) at the UN, wants to see the General Assembly adopt a plan to address the impacts of climate change in countries such as his.

“Developing countries are not responsible for the emissions that are causing global warming and climate change, and in order to adapt to the changes, to participate in the mitigation efforts towards the green global economy, developing countries need financial support and financial investment,” Akram said.

The plan would, first and foremost, see countries fulfil their longstanding promise to provide $100 billion US per year to developing countries for climate mitigation and adaptation. But even if that commitment was met, it’s not intended to cover what’s known as “loss and damage” — the costs of recovery from climate disasters such as the one Pakistan now faces.

Eddy Perez, the international climate diplomacy manager at Climate Action Network Canada, said developed countries have long backed away from the issue of financial assistance for loss and damage because it leads to questions of legal liability.

Perez called the floods in Pakistan shocking and “politically horrifying,” because there is no funding mechanism that countries can apply to when they’ve suffered climate-related disasters.

“It actually exposes how in 2022 we have not yet created a system that is able to respond to the devastation that Pakistanis are experiencing with these floods,” he said.

Canada has promised $30 million in humanitarian aid for Pakistan, and will also match donations from individuals up to $3 million. Last year, the federal government doubled its climate finance commitment to $5.3 billion over the next five years — that’s Canada’s share of the climate funding of $100 billion US per year promised by developed countries.

The G77 is calling for additional funding for countries dealing with loss and damage due to climate change, as well as a new body within the UN to mobilize and distribute financial assistance to countries that have suffered climate-related disasters.

As developing countries push to get loss and damage on the agenda at COP27, Perez hopes to see Canada as a leader in bringing developed countries on board.

Canada played a prominent role on the issue of climate finance at COP26 in Glasgow, co-writing (with Germany) a plan showing how and when developed countries will meet their commitment to deliver the promised $100 billion in climate finance.

Perez believes that this year, Canada’s minister for the environment and climate change, Steven Guilbeault, could help advance the issue of financing for loss and damage.

He said he saw hopeful signs in an interview Guilbeault did with the National Observer in May, in which the minister expressed a desire to change discussion around finance for recovery from climate disasters.

“We’re not there yet, but we do see openness to address this issue at the highest possible level,” Perez said.

When asked what Guilbeault intends to do about the issue of loss and damage financing at COP27, a representative from his office responded via email to say the minister has been listening to his counterparts from other countries to understand what constructive developments can be made for COP27 and that more details will follow in the coming months.

“Developing countries will not be able to respond without international solidarity,” he said. “We think that the political leadership in the industrial countries must wake up to this fact … because unless we co-operate, unless we have support, climate change is going to defeat us.”

Charlotte Degadt responded to a recent item on the environmental benefits of cheap rail tickets.

“Rail travel needs to be cheaper than driving to attract customers. It would be great to visit other cities on day trips or even longer, but it must be convenient, cheaper and with good links to other forms of mass transit.”

Old issues of What on Earth? are right here.

CBC News recently launched a dedicated climate page, which can be found here.

Also, check out our radio show and podcast. You’ve probably heard of quiet quitting, but what about climate quitting? This week on What On Earth, we meet Eugene Kirpichov, who left a secure job at Google to fight climate change, and now helps others find work doing the same. What On Earth now airs on Sundays at 11 a.m. ET, 11:30 a.m. in Newfoundland and Labrador. Subscribe on your favourite podcast app or hear it on demand at CBC Listen.

When Bryan Adams opened his North American tour in Summerside, P.E.I., on Aug. 31, people behind the scenes were attempting another milestone: the first evening concert in North America to be entirely solar-powered.

It was the idea of BluWave-ai, whose software powers Summerside’s smart grid. The city has a large solar farm adjacent to the concert venue, Credit Union Place, but since the show was at night, all systems would have to run off battery power from energy collected during the day.

There were two key unknowns. BluWave-ai could make estimates, but it didn’t really know how much energy it would take to power the sound, lights and even air conditioning for the huge space. In the end, they were sure the battery would have enough capacity — 276 kilowatts, roughly what it would take to run 3,000 100-watt light bulbs for three hours — to get through the concert.

But there was a second concern. “What’s Mother Nature going to give on that day? Because what Mother Nature gives and Bryan Adams uses kind of has to match up,” said BluWave-ai CEO Devashish Paul.

As things turned out, the weather co-operated and by the end of the show, there was still a little juice left in the battery.

The potential is significant. Paul noted that the halftime show at the NFL’s Super Bowl is run off a diesel generator on the sidelines because the production company is concerned about how robust the stadium’s electrical systems are.

That’s a much larger scale, but what happened at the Bryan Adams show could be adapted. “Just charge up these batteries and truck them in, just like you’d truck in diesel, and you can run the Super Bowl halftime show off daytime solar,” he said. “We can decarbonize and still run our shows.”

Hot and bothered: Provocative ideas from around the web

How do tides and turbines affect sea life? Fundy study hopes to find out

Harnessing power from the tides has tremendous potential, but in the Bay of Fundy, between New Brunswick and Nova Scotia, developing it responsibly offers as many challenges as opportunities.

Researchers hope that creating a new atlas of vital fish species that depend on the area will answer questions that could lead to more sustainable development of tidal power.

The Fundy Ocean Research Centre for Energy (FORCE) is leading a collaborative project to develop predictive models of where key species will be found in the Minas Passage based on environmental conditions. This would then be used to establish the likelihood that fish would be present in the same area as tidal turbines.

“You can’t develop tidal power alone. It’s something that’s a societal issue,” said Dan Hasselman, science director for FORCE. “And so the answer has to be a society-based answer. And that means going into this with our eyes wide open and understanding the risks of tidal power.”

The risk assessment project is researching nine marine species, including ones important for commercial fisheries, like striped bass and alewife, as well as ecologically and culturally significant species such as American eel, tomcod and white sharks.

In the past, tidal energy projects in the area have been met with concern from harvesters and Mi’kmaw groups over the potential impact on culturally, economically and ecologically important species.

This project is using acoustic fish tagging to examine the movement of species in the Minas Passage, where FORCE has a demonstration turbine. It’s also considering environmental factors such as water temperature, speed and direction as well as sea surface height and depth.

Charles Bangley, a research associate at Dalhousie University who’s working with the project, said these are combined in a model that serves as a forecast of fish distribution. “It could identify the times of year that we’re likely to have Atlantic salmon moving through Minas Passage,” he said.

Work on the project is expected to wrap up at the end of this year.

Darren Porter, a commercial fisherman in the area, said the risk assessment project can address existing questions about fish distribution in the Bay of Fundy, but more research is needed on the impacts of tidal power.

“The project will not determine the effects of tidal power, that’s not going to happen. But it will help with knowledge gaps that FORCE and the province have, with their understanding of how fish move in that system. And that’s important because just because it’s green doesn’t mean it’s blue.”

Andrea Copping, a senior research scientist at the Pacific Northwest National Laboratory in Richland, Wash., said there are a number of potential risks to marine life from tidal power. These include underwater noise, electromagnetic fields, disturbance of bottom habitat and displacement of animals from areas because they’re avoiding turbines, although research suggests the first two are very low risk. Of the potential effects, she said the possibility of animals coming into contact with turbines remains the most difficult to assess.

These devices “need to prove themselves … obviously, technically and economically and all that, but environmentally.”

Are there issues you’d like us to cover? Questions you want answered? Do you just want to share a kind word? We’d love to hear from you. Email us at whatonearth@cbc.ca.

Sign up here to get What on Earth? in your inbox every Thursday.