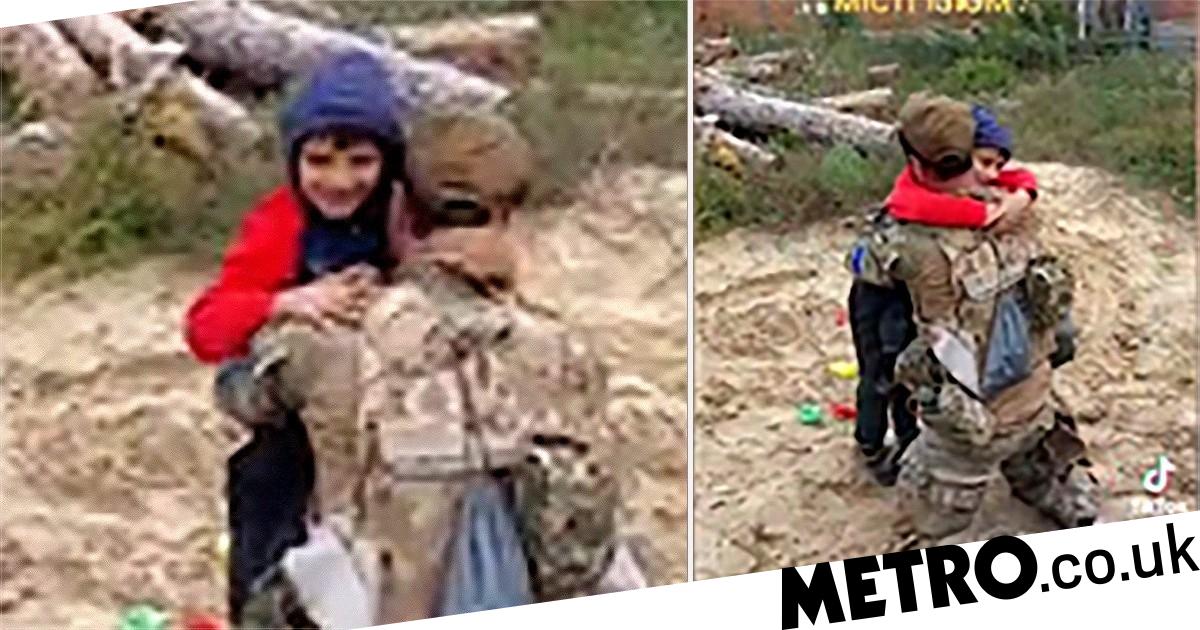 This is the moment a Ukrainian soldier was reunited with his young son after helping to liberate their home town from Russian control.

Emotional footage shows the father, wearing his military fatigues, throwing his gun to the ground and kneeling to hug his child who ran straight into his arms.

He can be seen holding onto the little boy as he kept coming back in for another cuddle.

This is just one of several reconciliations in the city of Izyum, and one of many more in the north-eastern Kharkiv region.

Another video captured the moment a mum saw her son for the first time since her village, Kozacha Lopan, was captured by Russia six months ago.

She ran up to him saying: ‘I knew you’d come home, one of my flowers bloomed,’ she said as she greeted her son.

‘I saved all your things, but the house is booby-trapped. I cooked borscht, do you want some? I knew you’d free me!’

These reunions were made possible because of Ukraine’s recent stunning counter-offensive which has reclaimed large swaths of territory.

Volodymyr Zelenskyy says his army has liberated around 3,100 square miles of territory so far this month, a swath of land nearly equivalent to the island of Cyprus.

After almost six months under Russian occupation, Izium has been left largely devastated, with apartment buildings blackened by fire and pockmarked by artillery strikes.

A gaping hole and piles of rubble stood where one building had collapsed.

Russia confirmed its withdrawal but previously claimed soldiers had pulled out as part of a pre-planned move.

The British Ministry of Defence (MoD) described a very different picture, reporting how ‘some units had retreated in relatively good order and under control’ while ‘others fled in apparent panic’.

The MoD said: ‘Such abandonment highlights the disorganised retreat of some Russian units and likely localised breakdowns in command and control.’