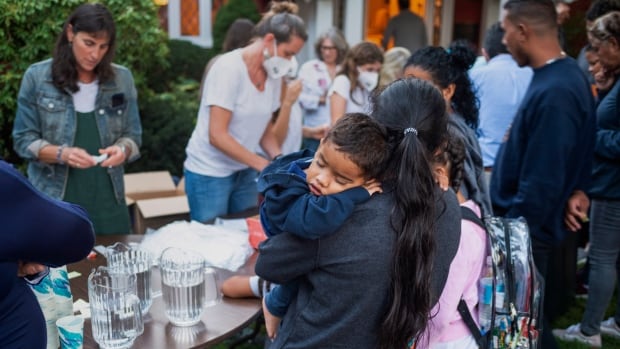 As It Happens7:05Florida governor used families as ‘pawns’ with Martha’s Vineyard stunt: Democrat

Democratic Rep. Dylan Fernandes says Florida’s Republican governor is a “coward” and a “weak human being” for shipping dozens of undocumented immigrants to a Massachusetts island with no warning just to make a point.

On Wednesday, 48 people, most of them Venezuelan, arrived unexpectedly on Martha’s Vineyard, an island known as a vacation destination for wealthy Americans.

Florida Gov. Ron DeSantis sent the two planeloads of people from San Antonio. When they landed, many didn’t know where they were. Some said they’d been told they were headed to Boston and other cities to be connected with housing and jobs.

It was part of a wider Republican strategy to send undocumented immigrants en masse out of Republican states to Democrat-led sanctuary cities.

DeSantis stood by the move, and promised to do it again. He said the state legislature has set aside $12 million US to transport people out of the state “to protect Florida.”

Residents on Martha’s Vineyard, which is home to about 20,600 people year-round, scrambled to accommodate the new arrivals. On Friday, officials said the 48 people were being moved again — voluntarily, this time — to a military base on nearby Cape Cod.

Fernandes, a state representative for Massachusetts, spoke to As It Happens host Nil Köksal. Here is part of their conversation.

Can you give us a sense of how these folks are doing now?

We’ve moved people from Martha’s Vineyard to a much larger facility, a more equipped facility, on Cape Cod. This is a place that has wraparound services for these families, including a whole host of health-care resources, mental health, crisis management [and] just, you know, regular health care.

How many children are there in the group?

There are four young children, and maybe a couple other people in there in their later teens.

How are they all feeling? They’ve been through a really long journey.

I think it’s been a roller coaster of emotions for a lot of the families here.

Several people, I am told, walked for several months before even making it into the country. You know, many of them were fleeing violence by gangs [or] fleeing economic disaster. Many of them had been robbed on their journey here.

And then they got to the U.S. after this incredibly arduous journey and were, you know, rounded up by Gov. DeSantis and his cronies … packed onto a plane and lied to about where they were going.

You say people were lied to. That’s the sense we’ve got from watching the coverage to this point … from Martha’s Vineyard; what translators were telling people there. What were they told before they got on those planes?

These are all lies. And it all speaks to just how incredibly cruel the governor of Florida is and the people and Republicans helping him.

Why do you think Ron DeSantis decided to do this?

Ron DeSantis did this as a political stunt. You have the governor of one of the largest states in the United States spending his time not helping his constituents — and look, there’s a lot of needs in the state of Florida — and instead spending his time and millions of … state taxpayer dollars hatching a secretive plot to ship families … to our state without any heads’ up notice, just so he could go on Tucker Carlson and Fox News announce it and beat his chest about being tough on immigration.

Ron DeSantis is a coward. There’s nothing tough about using women and children as political pawns. He is a profoundly weak human being.

But what is strong is the community response here and the state of Massachusetts’ response here to treat these people with the dignity and respect that everyone deserves.

So DeSantis didn’t reach out in any formal way to leaders in your state before this happened?

No. No formal or informal way.

People in Martha’s Vineyard certainly did respond and jumped into action pretty quickly to help house and feed this group of folks, as you said, who had already been through such a harrowing journey. I think people may have an idea of what Martha’s Vineyard is like. Certainly, it has lots of famous … summer residents. But there are also people who live there year-round. I wonder, though, if sending them away from Martha’s Vineyard kind of reinforces that stereotype that people have, that it is a place for wealthy elites? And, you know, why couldn’t they stay there?

Because it’s a tiny island and there’s just not the resources to house everyone in one location and then provide all of these wraparound services.

And, look, they didn’t have to leave either. You know, we’re not forcing people anywhere. This is entirely voluntary.

But these stereotypes are just not factually accurate…. The median salary on Martha’s Vineyard is below the state average. It’s actually poorer…. This is a community where over a third of the students in the public school are non-white.

So we’re communities that have long been embracing immigrants, long been embracing diversity. And so this narrative that is just spun by Republicans [and] Fox News, just to try and fit us into a box, it’s just not even true or representative of our community.

Florida and other southern states are clearly trying to make a point that they are not getting the support they feel they need to deal with migrants at their border, and say that your state doesn’t have to deal with that problem to the same extent. So putting aside how this all unfolded and how difficult [this was] and how these people were lied to — the political stunt, as you say — is there something to that argument? Do they need more support?

I think almost every American knows that we have a broken immigration system that needs to be reformed. And I know on a federal level, there have been many attempts over the years that have failed in doing that.

My focus as a state official is just making sure that everyone in my community and in my state is getting the resources and the things that they need to have a comfortable life and feel welcomed here.

Do you think the response that we’ve seen to what has happened to this group … could backfire on DeSantis?

Possibly. Look, I don’t really care that much about the politics of this. I mean, it’s more important to me to just make sure these 48 people that got off the plane in my state are cared for because at the end of the day, these are human beings. And while you might treat them with just a level of cruelty that is just mind-numbing to me, you know, we’re going to treat people with compassion.

With files from The Associated Press. Interview produced by Chris Harbord. Q&A has been edited for length and clarity