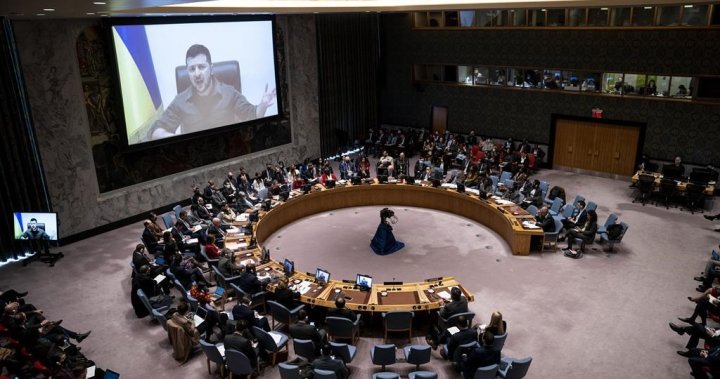 The U.N. General Assembly voted Friday to allow Ukraine’s president to deliver a pre-recorded address to next week’s gathering of world leaders because of his need to deal with Russia’s invasion, making an exception to its requirement that all leaders speak in person.

The 193-member world body approved Volodymyr Zelenskky’s virtual address by a vote of 101-7 with 19 abstentions including China. The seven countries voting “no” were Belarus, Cuba, Eritrea, Nicaragua, North Korea, Russia and Syria.

The assembly first voted on an amendment put forward by Belarus, a close ally of Russia, that would have allowed any leader facing exceptional difficulties and unable to attend to deliver a pre-recorded address. It was defeated by a vote of 23-67 with 27 abstentions.

The document that was approved expresses concern that leaders of “peace-loving“ U.N. sovereign nations can’t participate in person “for reasons beyond their control owing to ongoing foreign invasion, aggression, military hostilities that do not allow safe departure from and return to their countries, or the need to discharge their national defense and security duties and functions.”

The document, which was proposed by Ukraine and had more than 50 co-sponsors, permits Zelenskyy to submit a pre-recorded statement to be played in the General Assembly hall. It stresses that this will not set a precedent for future high-level assembly meetings.

Ukrainian Ambassador Sergiy Kyslytsya expressed satisfaction that the assembly will have a chance to hear directly from Zelenskyy “about how he sees the end of this war and how he evaluates the impact of this war on global affairs and on the United Nations in particular.”

He expressed gratitude in an interview with The Associated Press that 101 U.N. member nations gave such strong support to hearing from Zelenskyy, saying it was “pathetic” that Russia mustered only six other countries to oppose his speech.

0:55
Ukraine calls for designation of Russia as terrorist state to save Zaporizhzhia nuclear plant

Ukraine calls for designation of Russia as terrorist state to save Zaporizhzhia nuclear plant – Sep 6, 2022

Kyslytsya said Zelenskyy was scheduled to address the assembly Wednesday afternoon and there is no reason that would be changed.

The document refers to the General Assembly resolution adopted at an emergency special session on March 2 — six days after Russia’s Feb. 24 invasion of Ukraine — demanding an immediate halt to Moscow’s offensive and withdrawal of all Russian troops. The vote on the resolution, titled “Aggression against Ukraine,” was 141-5 with 35 abstentions.

British Counsellor Philip Reed told the assembly before the votes that the reason it is necessary “is because Russia has invaded its neighbor and for that reason Ukraine’s president cannot travel to New York for the General Debate,” the official name of the high-level meeting.

Nicaragua’s representative, whom its mission refused to identify, said the proposed decision “reflects a clear trend towards exceptionalisms” and violates the U.N. Charter’s principle “of sovereign equality of all members.” He urged members to oppose the proposal and avoid “double standards” and “selfish interests.”

As a result of the COVID-19 pandemic, the annual meeting of world leaders at the General Assembly was all virtual in 2020 and hybrid in 2021. But this year the assembly decided that all speeches must be in person.