Russian President Vladimir Putin and his Chinese counterpart Xi Jinping
On the sidelines of a summit in ex-Soviet Uzbekistan, the two leaders hailed their strategic ties in defiance of the West as Mr Putin praised China’s “balanced” position on the war while saying he understood its “questions and concerns”.
So, what does the relationship between China and Russia mean for Australia?
Opposition spokesperson for defence Andrew Hastie described the growing alliance between the two leaders as a “strange new monster” in an address in Washington, as he called on the United States to show leadership in the Indo-Pacific region.

“Authoritarian powers are on the move, energised by revisionist and expansionist ambitions,” he said.

Acting Prime Minister Richard Marles, who is also defence minister, said that while he would not use such language, “we are seeing greater engagement between China and Russia”.
“This is a relationship which is growing and obviously it’s something that affects the strategic circumstances that we have to deal with and the complexity of those circumstances,” he told the ABC on Friday.

“The world in which we are living in now [is] a world in which the global rules-based order, which has been the basis of peace and prosperity, is being put under great strain and we’re seeing that in eastern Europe with Russia’s appalling invasion of Ukraine. But we’re seeing it in the Indo-Pacific as well.” Mr Marles said rules around freedom of navigation in places such as the South China Sea are “fundamentally important to Australia’s national interest”.

“All of this is what we have to be dealing with,” he said.
Paul Dibb, Emeritus Professor of Strategic Studies at the Australian National University, said Australia must pay attention to what the two countries’ alliance means — particularly for potential military situations in other parts of the world.
The meeting between the Russian and Chinese leaders took place a day before Mr Putin met India’s Prime Minister Narendra Modi in Uzbekistan.

But unlike the exchange between Mr Putin and Mr Xi, the meeting between the Indian and Russian leaders was tinged with tension.

“I know that today’s era is not an era of war, and I have spoken to you on the phone about this,” Mr Modi told Mr Putin at a televised meeting in the ancient Uzbek Silk Road city of Samarkand.

Mr Putin told Mr Modi that he understood the Indian leader had concerns about Ukraine, but that Moscow was doing everything it could to end the conflict.

What happened at Vladimir Putin and Xi Jinping’s meeting?

The meeting between Mr Putin and Mr Xi happened on the sidelines of a summit of the Shanghai Cooperation Organisation (SCO), an intergovernmental organisation founded in 2001. It currently comprises eight member states: China, India, Kazakhstan, Kyrgyzstan, Russia, Pakistan, Tajikistan and Uzbekistan.
The last time the leaders met in person, just weeks before Russia’s 24 February invasion of its neighbour, they declared a “no limits” partnership and inked a promise to collaborate more against the West.
This meeting was a chance for Mr Putin to show Russia has not been fully isolated despite Western efforts, as he directed comments towards the US, which has been leading efforts to support Ukraine and impose sanctions on Russia.

“Attempts to create a unipolar world have recently acquired an absolutely ugly form and are completely unacceptable,” Mr Putin said.

He said he understood Mr Xi had questions and concerns about Russia’s war in Ukraine but praised China’s leader for what he said was a “balanced” position on the conflict.
A Chinese readout of the meeting did not mention Ukraine. It said China was willing to give strong support to Russia for matters related to its core interests, state broadcaster CCTV reported.
China has refrained from condemning Russia’s operation against Ukraine or calling it an “invasion”, in line with the Kremlin, which casts the war as “a special military operation”.
Professor Dibb described Mr Xi’s response as “measured and careful”.
“He did so without any qualifications to support what Putin is doing in Ukraine, and that it’s all the fault of the West and expansionist North Atlantic Treaty Organization [NATO],” he said.

“On the other hand, we know that Xi Jinping seems to be equally careful about not, as far as I can ascertain, breaking the West’s harsh economic sanctions against Russia.” 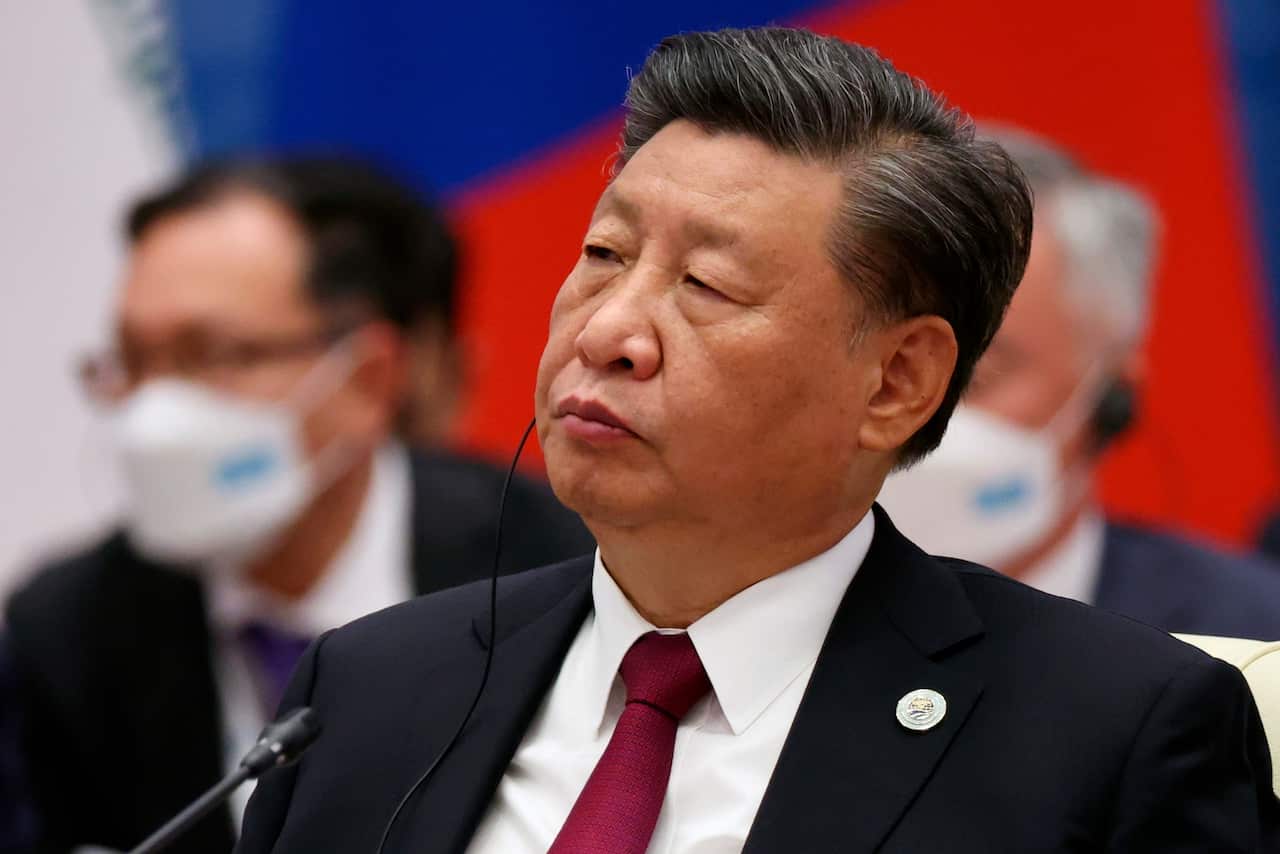 How has the relationship changed between Russia and China?

In the late 1950s and early 1960s, the Soviet Union and China had an international treaty.
“They were both communist countries, and they were both opposed to the US. But that didn’t last for long because of deep-seated differences of those two countries – different races, cultures and attitudes to the ownership of their territories,” Professor Dibb said.
That relationship collapsed, and led to a military conflict between the Soviet Union and China in 1969.
Professor Dibb said while some of those differences are “lurking” today, the “common view” of the two leaders has thrown them together.
He stressed the relationship between China and Russia is not a formal alliance like NATO, rather a “de-facto alliance”.
“It’s very important to both of them. Why? Because they’re both autocrats. They both despise the West. They both think the West is aggressive, but at the same time, they think the West is weak, and that time is on the side of the autocracies,” he said.

“Xi Jingping makes it especially clear about time being on China’s side – now is the time for China to reassert itself from the 19th century – a century of humiliation by the West.”

But with , the same can’t be said for Mr Putin, according to Professor Dibb.

“Putin, we all know, time is not on his side. So I think the challenge for Putin, particularly now, where he’s looking as though Russia is not defeated but is having real problems … is what does that mean for this bilateral relationship?”

What does this mean for Australia?

Professor Dibb said his main concern for Australia is the increasing bilateral military cooperation between the two countries.
He cited examples, such as the two powers increasingly being involved in joint military exercises, with one called ‘Vostok’ taking place in eastern Russia in recent weeks.
At the time, China’s ministry said the participation in the joint exercises was “unrelated to the current international and regional situation”.

Under Mr Putin, Professor Gibb said Russia is also exporting some of its high technology capable weapons to China.

“The relevance of all that is just how close that military relationship is,” he said.

“The issue for us now is, are China and Russia increasingly in coordination – not just militarily, but with trade and investment – to try and dislodge the US’ superior presence in our region of primary strategic concern, the Asia Pacific region?”

Global strategic environment is ‘worse than the Cold War’

Professor Dibb argues the global strategic environment is “worse now than at any time since the Cold War” due to the risk of nuclear conflict.
“There’s a greater risk now, in my view, of the use of nuclear weapons if things go bad, or worse, for Putin in Ukraine than they are at present,” he said.
“Russia is not going to disappear, so that is a big issue. And it could spill over into a general war in Europe.
“What will Xi Jinping do about this?”
Russia’s invasion of Ukraine has drawn commentary over its implications for relations between China and Taiwan.
China has fired ballistic missiles and deployed fighter jets, warships and drones as part of its after it hosted a visit from US House Speaker Nancy Pelosi last month – the highest-profile elected US official to visit Taiwan in 25 years.
China claims democratic Taiwan as its own territory, but Taiwan’s government strongly opposes China’s territorial claims, saying it is an independent country and will defend its freedoms and democracy.