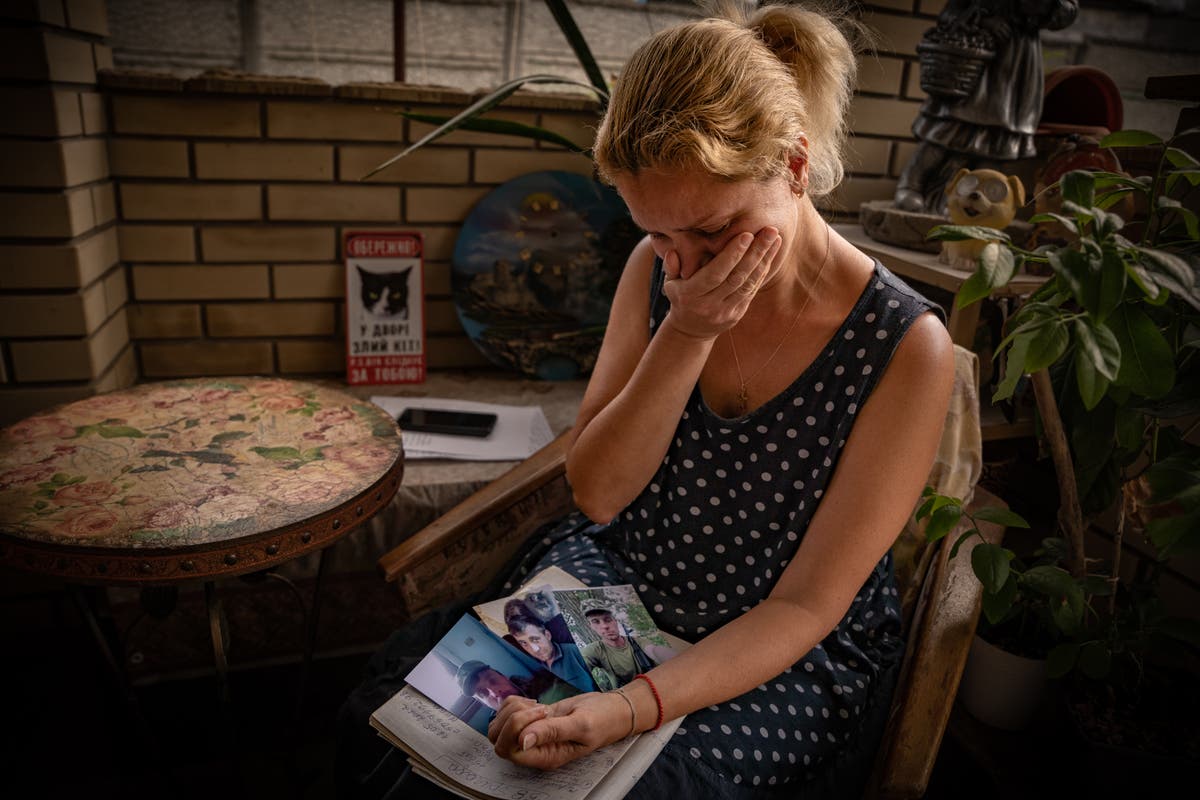 All day the Ukrainian women search through photos of corpses posted by Russian soldiers showing off their kills, in the desperate hunt for their missing loved ones.

In the crude images of frozen grey faces, blood smeared torsos and the scraps of remains, they look for a flick of something recognisable: a scar or a ring.

“Twenty hours a day I go through these Telegram channels  looking for him,” says Maria, her face gripped by grief.

“We are a community of women who are looking for our loved ones. All of us have to trawl through the photos of the dead. We have to see if they are there.”

A manicurist by trade, she is searching for her fiance, a 32-year-old construction worker and mechanic from Dnipro. He vanished in July just over a month after receiving his call-up papers and only a week into his first deployment: a reconnaissance mission in one of the nastier frontlines of Donbas, eastern Ukraine.

At the time of speaking to The Independent, Maria explained that he and a large chunk of his artillery brigade were still unaccounted for.

They were last heard of on 3 July. The family members do not know if they are alive, in captivity, or dead somewhere on an inaccessible battlefield.

Adding to the suffering is that the Ukrainians accuse the Russians of not properly communicating the names and whereabouts of their Prisoners of War.

Under the Geneva Conventions, the International Committee of the Red Cross must be given lists of PoWs and allowed to visit them wherever they are. But the ICRC has repeatedly warned they have not been given full access to the prisons and internment camps since Putin launched his war in February.

“For example Ukraine applied to Russia about 5,000 soldiers who had been in Mariupol. Russia only confirmed 3,000 are alive but didn’t say where they are,” she says.

The Independent was unable to verify this. Russia denies it is deliberately obscuring the fate of Ukrainian PoWs.

That is why, in the era of social media, in this war the internet has become a lifeline.

The relatives of Roman’s brigade, which The Independent has decided not to identify for security reasons, set up a Telegram channel looking for information.

Within a week it had over 700 subscribers.

Every day, mothers, sisters, fathers, partners, brothers trawl the internet trying to find any scraps of information which they share in the chat.

One of the most valuable resources are the grisly “trophy” shots posted by Russian soldiers and their proxies.

“It’s horrific. I want to know that he is alive and that he is captured by Russia,” she says sobbing as she scrolls through the Telegram channels.

This is the fate for the family members of both soldiers and civilians who have vanished. In an information blackout it is up to them to pool together open source information to try to piece together what happened.

Over the last few months The Independent has been investigating the disappearance of Ukrainain civilians and soldiers from across the country, along the way  uncovering fresh evidence of possible war crimes including forcible transfer, enforced disapperance, hostage-taking, torture and forced labour. It has challenged Moscow’s narrative that that movement of people has been voluntary and part of humanitarian evacuation efforts.

We tracked the lives of over a dozen individuals, including Roman, along the way managing to locate two individuals and inform their families of their whereabouts, and uncovering the three main routes that Moscow’s forces use to take Ukrainian civilians and military to prisons in Russia.

Throughout the journey, one constant was the creative ways families and members of civil society are using to try to find people.

Ukrainian officials say they have received at least 25,000 official missing persons requests to the national hotline since the war started. Only half of them have been accounted for.  Among them are thought to be at least 228 missing children, according to the press service of the Ukrainian prosecutor general’s office.

Around 7,000 members of the Ukrainian armed forces are among those missing, according to Yrui Berlousov , a Ukrainian prosecutor examining the cases.

He fears, however, that that estimate is extremely conservative and the true number of both missing civilians and military could be as many as 10 times that amount.

“If a person is missing but no one calls the police hotline then the person is not in the database, he or she will not be counted,” he continues.

“We don’t know where the missing are. They could be alive but refugees, they could have been deported to Russia, dead or held in detention centres.”

For Maria and the other women she is in touch with, Facebook, Telegram and What’s app groups are essential places to search for information about prisoner swaps, the discovery and recovery bodies as well as to reach out to those who have come off  frontline or have been released from prison. She says they also speak to the military officials, soldiers they know. They share contacts and pool their information and resources.

“It’s hell – I have to take a lot of medication to be calm enough to handle going through this material,  day in and day out,” she adds shakily. “I cannot do my actual job. Finding Roman is my full time job now.”

Civilians are teaming up with charities and others to keep up the  search, says Ivanka Malechevska from the Centre of Civilian Liberties in Kyiv that has 490 active cases of missing civilians and soldiers they are investigating.  The youngest missing person they know of is just 16.

They gather reports from prisoners who have even been released or witnesses in areas from occupied territory and use social media to try to piece together what happened. In a secure Google form they offer relatives a space to submit and store any information they hand.

This way they have successfully located hundreds of people already.

She says it’s dangerous work. A few of the people in occupied territory who had been feeding them information on missing people have vanished themselves.

“And that is why we are worried that the true number of missing people is far higher than we could even imagine. Some people may never be found,” she says.

Svitlana – whose ex-husband and father of her 12-year-old daughter – vanished in March while trying to rescue family members form besieged Mariupol – is one example of those online communities working. For her, the internet  was the only lifeline after Oleksiy volunteered to drive to the then besieged city of Mariupol to rescue relatives and friends.

He messaged to say he was approaching the city and then vanished into thin air.

An online community of relatives of volunteer drivers like Oleksiy, who had started disappearing one by one, pooled valuable resources.

Through that they found out that her ex-husband was being held in Olenivka prison, a former penal colony in the self-proclaimed Russian backed Donetsk People’s republic. The sprawling facility was  re-opened when the war started to hold interned civilians and prisoners of war taken in the south of the country.

The Independent investigation into the facility reveals evidence of enforced disappearance, torture and forced labour – as inmates like Svitlana’s ex-husband were abducted, beaten and forced to renovate the crumbling facility for the influx of prisoners.

“There were a lot of drivers who went to Mariupol and they were disappearing so in the end we built this community and were crowd sourcing information.”

They even tried to get access to the prison to send in supplies – in vain.

In July, Oleksiy was eventually released alongside 30 other drivers taken in March and April. A lot of the relatives think it is because of the advocacy of the families outside the prison.

But Oleksiy is among the lucky few.

The worst fear for people like Maria is that their loved one is dead. And that in itself is another nightmare.

When Russian forces eventually withdrew from the areas it occupied in north-west and north east Ukraine including Kyiv, Chernihiv and Kharkiv regional officials, civil society and families started discovering mass and makeshift graves. The Independent stumbled on a body in the wood of a young teenage boy who had clearly been bound and shot.

And so with the discovery of the dead comes the gruelling task of identifying them.

And this is where the civilian network comes in again, explains Vladislav Perovskyi, 27,  a doctor of forensic medicine.

Since the war began he alone has identified well over 250 bodies from areas like Bucha, Irpin, and Vyshohorod in the Kyiv region. He is now working through the latest delivery of corpses of those killed in Mariupol. They are being kept in a parked refrigerated truck outside Kyiv’s main morgue, because it is already too full.

He described bodies bound and shot, crushed from being run over by armoured cars and so burned or badly decomposed it is near impossible to identify them from scars or dental records.

And so often they have to rely on clues left with the bodies and networks of civilians.

“In Kyiv, the bodies would be buried with car number plates, or scraps of paper with name and address and day of death tucked into the clothes they were temporarily buried in. Some have even have details scribbled on the body.”

And the internet comes into play again. They log all the information on an online database which civilians looking for missing loved ones are permitted to access.

“There was one case where a body was found in Bucha in April, which we struggled to identify from his dental records. He was later identified by a pair of socks with elephants on them that a friend had gifted the deceased and had accessed the database.

The job of identifying people is getting harder. Many of the corpses coming into the morgue now are being shuttled from the eastern frontline in body swaps.  Many have spent months in the summer heat decomposing.

“We  are still continuing logging and identifying the bodies and trying to find the families,” Vladislav continues.

“But realistically it could take years  to find some of the relatives, especially if they have fled the  country. “

“The devastating truth is some bodies may never be identified, their loved ones never found.”

And this is the biggest fear for Maria, who is still looking for her fiance. The last news she had was that the military had sent in a civilian drone to the area where her fiance vanished and had seen 20 bodies, but none were Roman’s.

And so in the interim all she can do is hope and pray he is in captivity and keep scrolling online.

As we speak she gets a phone call from a medic friend of hers saying there are new bodies retrieved from the frontline that have been brought to the local morgue. She braces herself for a fresh influx of photos to scroll through.

“I cannot breathe without him. A lot of people need to just know what happened, where they are, at the very least some closure.”

The worst thing is when you don’t know either way, that’s the worst not knowing and just having to wait.”