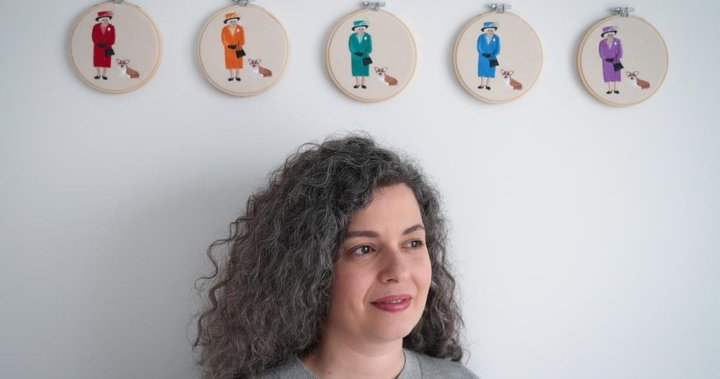 There are kits to help you crochet a miniature Queen Elizabeth sporting any colour dress and hat you desire, T-shirts bearing her likeness and “never complain, never explain” — an adage reportedly adopted by her late mother– and limited-edition Barbie dolls Mattel released in honour of her 96th birthday and Platinum Jubilee selling for up to $6,600 on eBay.

The booming demand to own these items offers a glimpse into a royal memorabilia industry that has surged in the wake of the British monarch’s death and is growing stronger as the globe continues with its 10 days of mourning leading up to her Monday funeral.

While many are apathetic about the end of her 70-year reign and King Charles taking the throne and others see cashing in on the moment as distasteful, some of the family’s Canadian fans appear keen to mark her 96-year life and the power shift by owning or making commemorative items.

“It’s a memory,” said Jonara Oliveira, who runs an Etsy shop selling embroidery hoops depicting the queen and one of her beloved corgis.

“People are buying to have this reminder of the figure that she was and the moment.”

1:17
Massive painting of Queen Elizabeth on display at Winnipeg mall

Massive painting of Queen Elizabeth on display at Winnipeg mall

Oliveira, a Surrey, B.C.-based illustrator who hails from Brazil, got the idea for the royal hoops when she was learning about the queen to prepare for her citizenship test.

She started selling them ahead of the queen’s Platinum Jubilee celebrations in June, and sales were strong, but quelled in the weeks after.

Demand soared once more, when the queen died on Sept. 8. In the last week, she sold four times the average of the last six months and searches for her products rose by 110 per cent. Visits to her shop are now even higher than during the jubilee.

READ MORE: In an about-face, Palace will allow Prince Harry to wear uniform at Queen’s vigil

Canada Post saw a similar pattern with the Platinum Jubilee stamps it released in winter.

When compared to the five weeks before Sept. 8, sales of the silver stamp have increased by 900 per cent in the last week, said Canada Post spokesperson Lisa Liu.

“For context, these stamps were first issued for sale in February so sales had levelled prior to this,” she wrote, in an email. “However, we have definitely seen an increase in sales since Her Majesty passed away.”

The surge for royal knick-knacks didn’t surprise David Soberman because the queen’s death is a “colossal” event most people have never experienced.

3:14
Royal harpist for Queen Elizabeth and King Charles on music fit for the monarchy

“It marks the longest reign in British history and that’s quite, quite incredible, when you think about it,” said the marketing professor at the University of Toronto’s Rotman School of Management.

“People are thinking they’re not going to make these (items) anymore because she’s not the queen anymore and they would like to have something to remember her by.”

However, palace-approved kitsch is currently limited because the Royal Collection Shop, the Royal Family’s usual means of selling commemorative pieces, has been off-line for several days.

Marks & Spencer, John Lewis and Primark, U.K. shops known to sell royal merchandise, have also yet to release queen-related products. Soberman suspects they want to avoid being seen as being in “bad taste” during the mourning period.

But other online marketplaces are teeming with royal wares.

Kijiji has dozens of active listings for royal memorabilia and since Sept. 8, experienced an average 2,000 searches per day for “Queen Elizabeth” related keywords across Canada, said Kent Sikstrom, Kijiji Canada’s community relations manager, in an email.

2:57
‘They sanctioned children being raped and murdered’: Grief for Queen ignites unresolved trauma for Indigenous peoples

‘They sanctioned children being raped and murdered’: Grief for Queen ignites unresolved trauma for Indigenous peoples

He added the searches amount to an uptick from recent months, when Kijiji saw “little to no activity” linked to the queen.

Leslie Walsh, eBay Canada’s head of communications, declined to share search or sales data related to royal products “out of respect” for the queen, the Royal Family and those mourning. Yet its website showed more than 73,000 items linked to the late monarch and thousands were listed in the days since her death.

There are crown-topped rubber ducks, queen bobbleheads, holiday ornaments sporting her initials and even tea bags made to look like she’s taking a dip in your mug.

If the late monarch isn’t your cup of tea, there are condoms, colouring books, socks, bow ties, Pez dispensers, and even a cereal called Harry and Meghan’s Wedding Rings from the nuptials of Prince Harry, the queen’s grandson.

Prince William’s marriage to Kate Middleton, now the Princess of Wales, generated a Swarovski crystal-encrusted Ring Pop inspired by her sapphire engagement rock, New Balance sneakers stitched with their names on the tongue and beers, duvets and barf bags.

But not all royal merchandise has value, Soberman warned. Limited edition items like the Barbies may fetch big bucks, but stamps and coins that are common won’t be worth much.

That won’t deter people from spending, he predicted.

Between celebrations, memorabilia, books and tourism, the Centre for Retail Research in Norfolk, England estimated William and Kate’s nuptials generated ?407 million in sales, while Harry and Meaghan’s spurred ?83 million and the birth of future king, Prince George, made ?259 million.

All are overshadowed by the most recent jubilee, which was predicted to trigger ?408.29 million in spending.

The queen’s death could surpass even the jubilee sales simply because of the momentous feelings she fosters, Soberman said.

“It’s almost like she’s always there…and so when you say that’s over…it creates a destabilization and that makes things emotional.”

This report by The Canadian Press was first published Sept. 17, 2022.