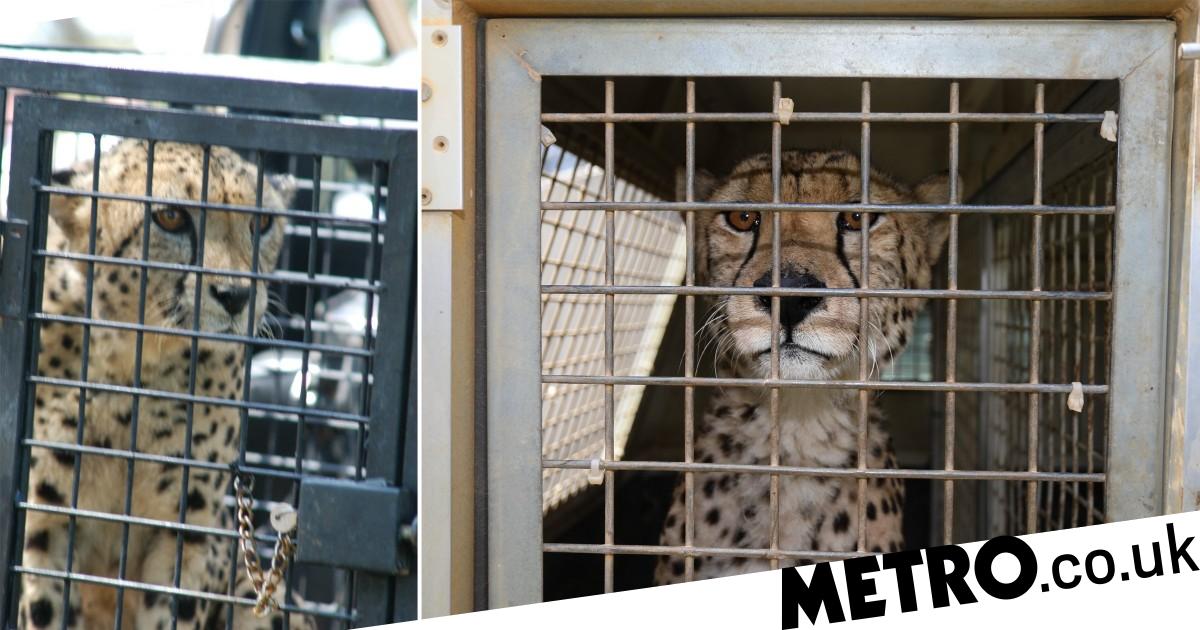 Cheetahs are being reintroduced to India seven decades after being hunted to extinction.

This morning the country’s prime minister released the big cats into a holding enclosure as part of the controversial project, which has faced significant criticism at home and abroad.

Narendra Modi says the move will increase biodiversity and eco-tourism, but some locals fear the animal’s impact, while many conservationists are unconvinced by the plan.

The scheme – estimated to cost $11.5 million (£9.98 million) over five years, including $6.3 million (£5.46) that will be paid for by state-owned Indian Oil – has seen eight cheetahs arrive after a 5,000 mile flight from Namibia to the northern city of Gwalior.

Following their two-day airplane and helicopter journey, the animals will be monitored by medics in quarantine for a month.

Then they will move into central India’s sprawling Kuno National Park, where scientists hope the world’s fastest land animal can help restore nature.

PM Mr Modi said: ‘When the cheetah will run again, grasslands will be restored, biodiversity will increase and eco-tourism will get a boost.’

Cheetahs were once widespread in the country but due to hunting and habitat loss died out in 1952.

They may face competition from other big cats still in India, like tigers and leopards.

Worldwide, there are thought to be less than 7,000 adult cheetahs left in the wild.

They now inhabit less than 9% of their original range.

But the Cheetah Conservation Fund’s Laurie Marker believes India’s grasslands and forests could offer ‘appropriate’ homes for them big cat.

She added: ‘To save cheetahs from extinction, we need to create permanent places for them on earth.’

SP Yadav, of the National Tiger Conservation Authority, said the extinction was the only time the country had lost a large mammal species since independence.

‘It is our moral and ethical responsibility to bring it back.’

But some experts are less optimistic.

Some Indian conservation experts called the effort a ‘vanity project’ that ignores the fact that the African cheetah, a subspecies similar but separate from the critically endangered Asiatic cheetah, is not native to the Indian subcontinent. Just 12 remain in Iran.

Wildlife biologist Ullas Karanth, director of the Centre for Wildlife Studies in Bengaluru, predicted that after the animals move out of their enclosure ‘they’ll be knocked out within six months by domestic dogs, by leopards…

‘Or they’ll kill a goat, and villagers will poison them’, he argued.

Mayukh Chatterjee, from the International Union for Conservation of Nature, warned that there could be ‘cascading and unintended consequences’ after bringing a new animal into a habitat.

‘The question remains: How well it’s done,’ he said.

Conservation geneticist Pamela Burger from Vienna’s University of Veterinary Medicine suggested cheetahs should be helped where they currently are rather than experimenting in areas where competition may cause problems for them.

‘It would be better to conserve them now where they are than to put effort in creating new sites where the outcome is questionable,’ she said.

The move, which has been years in the making, comes after a tiger population boom in India led to more conflict with people in the same space.

Some have also asked whether cheetahs could impact other carnivores like striped hyenas.

The cheetah will first be released into a large enclosure in the park to help them get used to their new environment.

Likely prey — including spotted deer, blue bulls, wild boars, porcupines and antelope — are in the enclosure which aims to keep other predators like bears and leopards out.

The cheetahs will be fitted with tracking collars and fully released into the national park in two to six months.

Scientists believe the reserve is big enough to hold 21 cheetahs and another 12 are expected to join next month from South Africa.

But if the five females and three males can establish territories and breed, they could spread to other interconnected grasslands and forests that can house another dozen cheetahs, scientists say.

There is one village, home to a few hundred families, that remains on the edge of the park.

Government officials say those people will be moved shortly, while anyone who loses livestock will be compensated.

Meanwhile, officials have also been vaccinating domestic dogs in the area against diseases that could spread to the cats.

In the UK, a rewilding project has seen bison reintroduced to the UK after thousands of years.

They are said to be getting on ‘amazingly well’ in Kent.