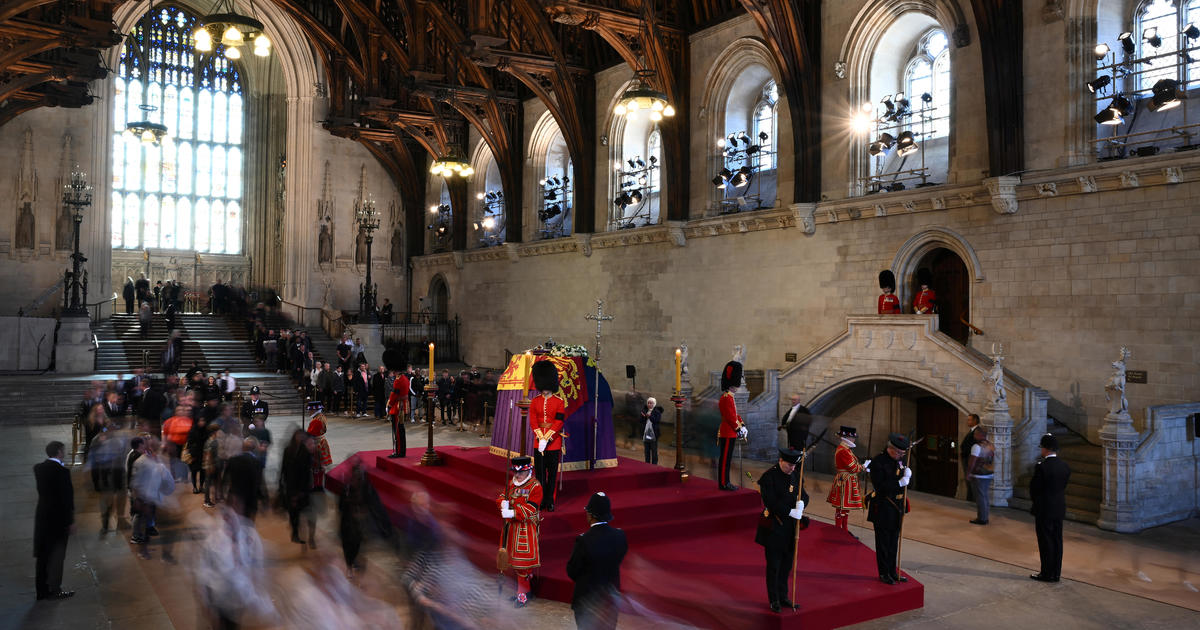 Police in London arrested a man after what the force described as a “disturbance” Friday night in Parliament’s Westminster Hall, where Queen Elizabeth II is lying in state, draped in her Royal Standard and capped with a diamond-studded crown. Parliamentary authorities said someone got out of the line to view the queen’s coffin and tried to approach it on its platform.

Tracey Holland told Sky News that her 7-year-old niece Darcy Holland was pushed out of the way by a man who tried to “run up to the coffin, lift up the standard and try to do I don’t know what.” She said police detained the man in “two seconds.”

According to AFP, a live television feed of the mourners briefly cut away around 10 p.m. as police detained the man, two hours after King Charles III and his three siblings stood vigil in the cavernous hall.

The Metropolitan Police force said a man was detained for a suspected public-order offense.

The tide of people wanting to say goodbye to the queen has grown steadily since the public was first admitted to the hall on Wednesday. On Friday, authorities temporary halted letting more visitors join the end of the line, which snakes around Southwark Park some 5 miles from Parliament.

Overnight, volunteers distributed blankets and cups of tea to people in line as the temperature fell to 43 degrees Fahrenheit. Despite the weather, mourners described the warmth of a shared experience.

“It was cold overnight, but we had wonderful companions, met new friends. The camaraderie was wonderful,” Chris Harman of London said. “It was worth it. I would do it again and again and again. I would walk to the end of the earth for my queen.”

Members of the public kept silently streaming into Westminster Hall even as the queen’s four children — Charles, Princess Anne, Prince Andrew and Prince Edward — stood vigil around the flag-draped coffin for 15 minutes on Friday evening. A baby’s cry was the only sound.

Before the vigil, Edward said the royal family was “overwhelmed by the tide of emotion that has engulfed us and the sheer number of people who have gone out of their way to express their own love, admiration and respect (for) our dear mama.”

People queuing to see the queen have been of all ages and come from all walks of life. Many bowed before the coffin or made a sign of the cross. Several veterans, their medals shining in the spotlights, offered sharp salutes. Some people wept. Others blew kisses. Many hugged one another as they stepped away, proud to have spent hours in line to offer a tribute, even if it lasted only a few moments.

On Friday, the waiting time swelled to as long as 24 hours. The mourners included former England soccer captain David Beckham, who lined up for almost 12 hours to pay his respects. Wearing a white shirt and black tie, he bowed briefly to the coffin before moving out of Westminster Hall.

“We have been lucky as a nation to have had someone who has led us the way her majesty has led us, for the amount of time, with kindness, with caring and always reassurance,” Beckham told reporters afterwards.

The lying in state is due to continue until Monday morning, when the queen’s coffin will be borne to nearby Westminster Abbey for a state funeral, the finale to 10 days of national mourning for Britain’s longest-reigning monarch.