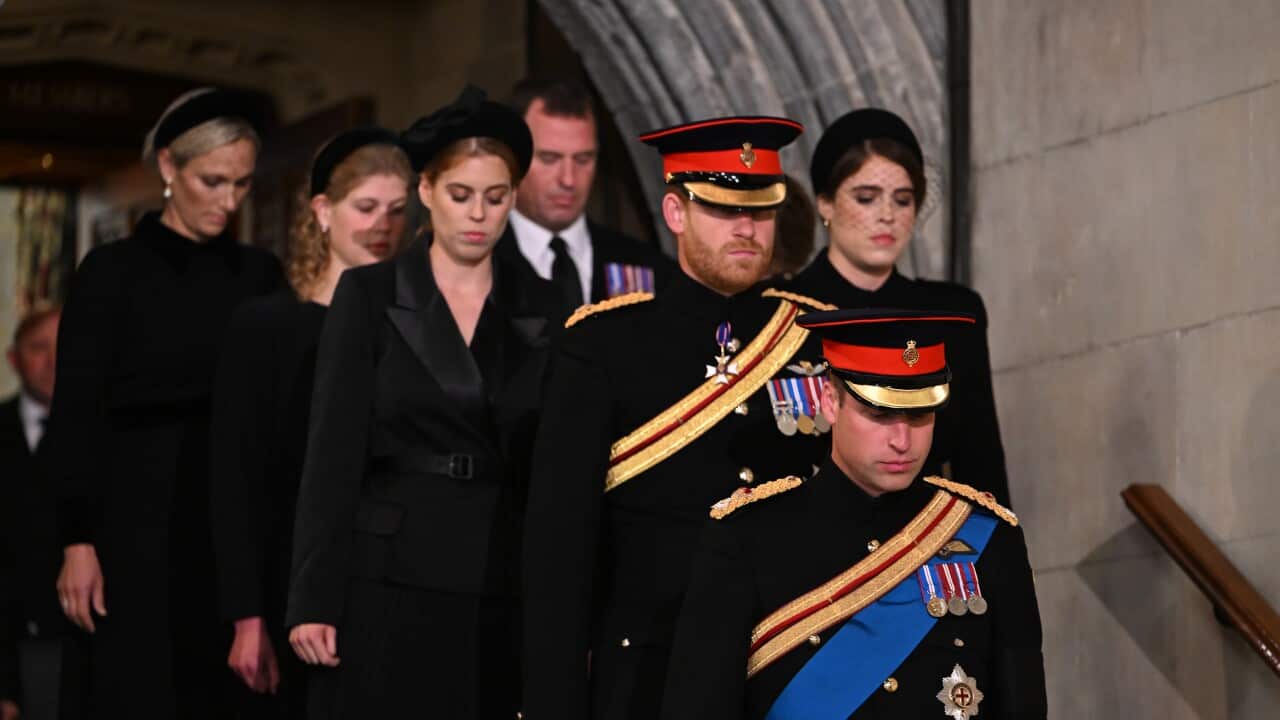 Princes William and Harry stood vigil at either end of the coffin of their grandmother Queen Elizabeth on Saturday, heads bowed as a line of mourners streamed past the late monarch’s lying-in-state.

The two sons of King Charles, attired in military uniforms, stood in silence at a 15-minute vigil in the vast Westminster Hall where the coffin has been lying since Wednesday, draped in the Royal Standard and with the bejewelled Imperial State Crown on top. William and Harry were joined by their six cousins, including Princess Beatrice and Eugenie, who earlier paid tribute to Britain’s longest-reigning monarch. 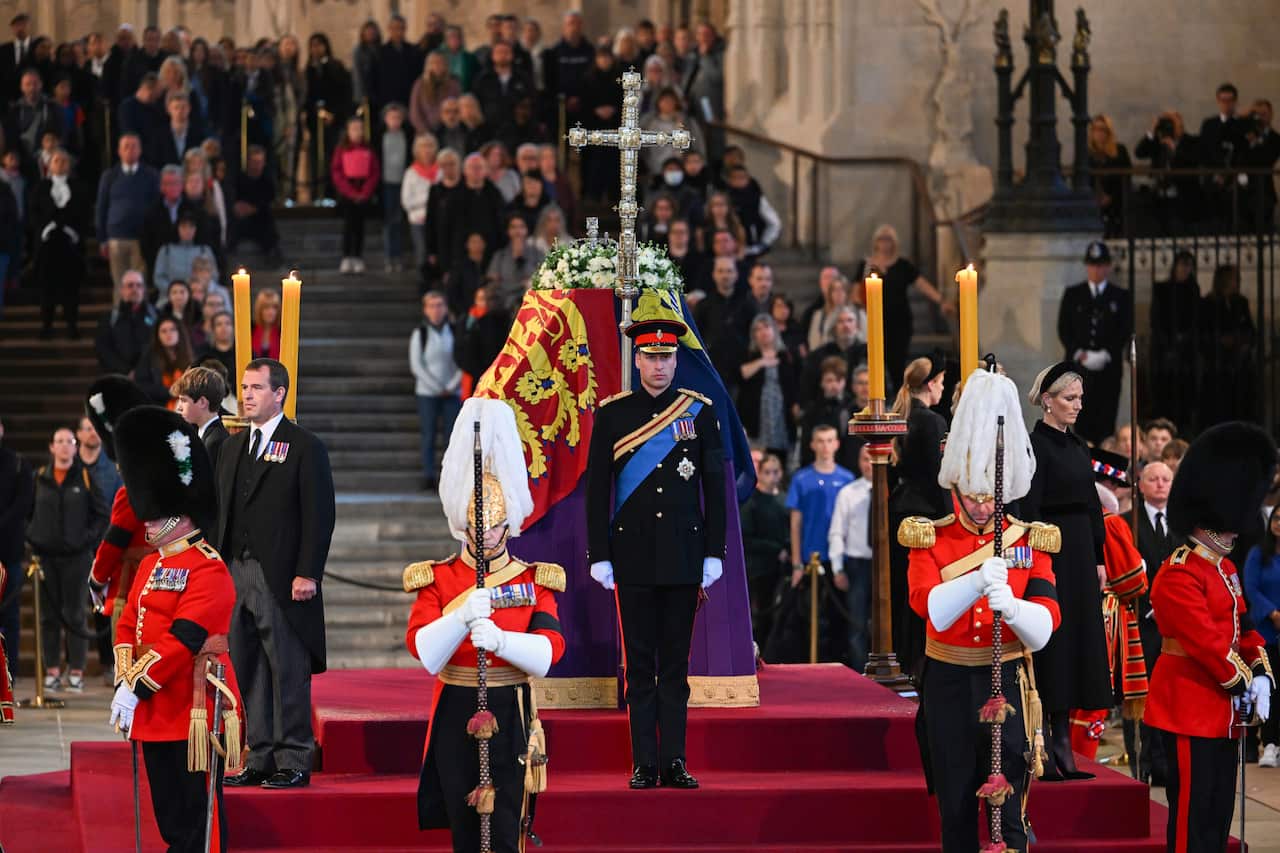 The Queen died on 8 September at her summer estate in the Scottish highlands, aged 96.

“You were our matriarch, our guide, our loving hand on our backs leading us through this world,” said the sisters, daughters of Prince Andrew.

“You taught us so much and we will cherish those lessons and memories forever. For now dear grannie, all we want to say is thank you.”

Hundreds of thousands of people have lined up for long hours in a queue stretching along the River Thames, waiting to file past the coffin and honour the queen – a testimony to the affection in which she was held.

Earlier on Saturday, Charles and his heir William shook hands and greeted well-wishers in the queue, asking people how long they had been there and whether they were warm enough.

To cheers of “hip, hip, hurrah” and shouts of “God save the King”, Charles and William spoke to mourners near Lambeth Bridge, as they neared the end of the massive line to see the lying-in-state in the historic Westminster Hall.

On Friday night, Charles joined his three siblings – Princess Anne and Princes Andrew and Edward – in a silent vigil at the coffin.

“She wouldn’t believe all this, she really wouldn’t,” William was heard telling one man of the late queen, who came to the throne in 1952. “It’s amazing.”
One woman told Charles it had been “worth the wait” and others wished him well and cheered as he moved down the line.
Ahead of the state funeral at Westminster Abbey on Monday, world leaders also started arriving in the British capital. US President Joe Biden was expected to go to the lying-in-state on Sunday. On Saturday, Charles met leaders of the 14 countries where he is head of state such as Canada, Australia, and Jamaica, after meeting the governors-general – the people who represent the monarch in overseas realms – at Buckingham Palace.

London’s police force has described the funeral as the biggest security operation it has ever undertaken as prime ministers, presidents and royals come together and huge crowds throng the streets.

The king visited police headquarters on Saturday to thank emergency services workers involved in the planning.
Underscoring the risks, police said one man had been detained and arrested after a witness told Sky News he “ran up to the queen’s coffin”. Footage showed a man being pinned to the ground by police officers and taken away.

By evening, Britain’s culture ministry said the waiting time to reach the lying-in-state was up to 11 hours.

Inside the silent hall, some mourners wept, many were tearful while current soldiers and veterans saluted their former commander-in-chief.
Others in the line fell to their knees. New friendships, acts of kindness and the struggles of standing in line for hours, sometimes in the cold overnight, have come to define what has become known as just “the queue”.
Film-maker Matthew West described how a military man was offered the chance to get to the front but declined.

“That was the highlight. The lowlight was when we stood still for two hours and I lost the will to live.”

There has been an outpouring of emotion across the country and 10 days of choreographed events since the Queen died at Balmoral in Scotland.
Her coffin was at first laid at rest in Edinburgh before being flown south to London.
The Queen’s children have described being overwhelmed by the reaction to their mother’s death.
The state funeral, to be attended by nearly 100 presidents and heads of government, is likely to be one of the biggest ceremonial events ever held in Britain.
Soldiers took part in early morning rehearsals in Windsor, where the queen’s coffin will be taken after the funeral at Westminster Abbey.
Marching bands playing music and Grenadier Guards, who wear a tall bearskin hat on ceremonial duties, were seen marching down the High Street in preparation.
Liz Kelshall from Leatherhead, southern England, said she had brought her two children to Windsor so they would never forget the Queen.

“It’s really important for them to grow up and remember this and it’s important for us as a family to come and show some respect for an amazing woman,” she said.