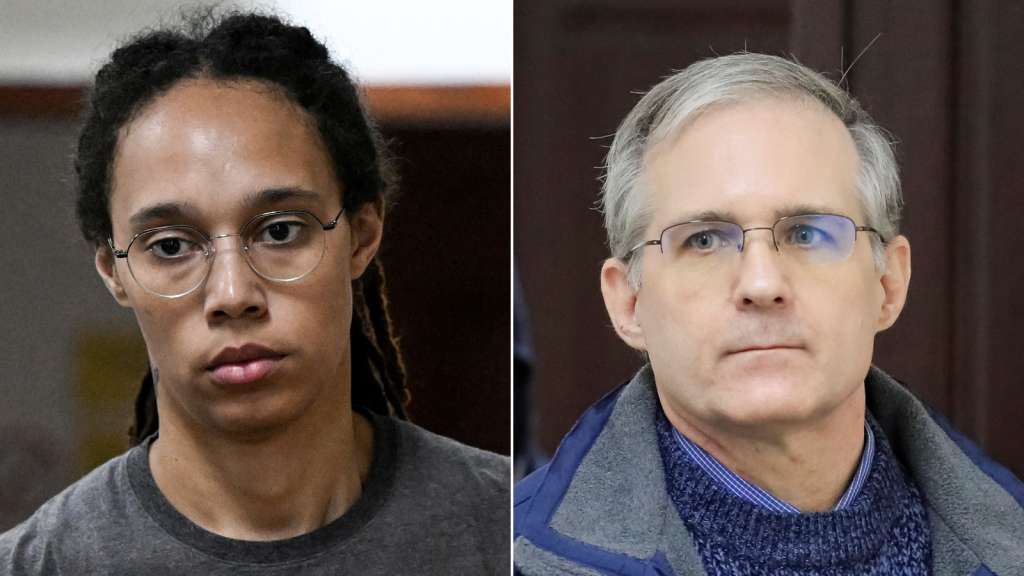 (CNN) — President Joe Biden met separately with the families of Brittney Griner and Paul Whelan at the White House on Friday, marking his first time personally meeting with them since their loved ones were detained in Russia.

Biden reiterated “his continued commitment to working through all available avenues to bring Brittney and Paul home safely,” White House press secretary Karine Jean-Pierre said in a statement on Friday.

“The President appreciated the opportunity to learn more about Brittney and Paul from those who love them most, and acknowledged that every minute they are being held is a minute too long,” Jean-Pierre said in the statement.

Griner was detained in February for carrying vape cartridges containing cannabis oil in her luggage. The two-time US Olympic basketball gold medalist pleaded guilty to drug charges and said she accidentally packed the drugs while in a hurry. She has been sentenced to nine years, along with a fine of about $16,400. Her legal team in Russia has appealed the sentence.

Whelan has been imprisoned in Russia for more than three years after being convicted on espionage charges that he vehemently denies. He was sentenced in June 2020 to 16 years in prison in a trial US officials denounced as unfair.

The Biden administration has repeatedly said that working to secure Griner and Whelan’s release, as well as that of Americans wrongfully detained abroad, is a top priority. In late July, US Secretary of State Antony Blinken announced that the US had put forward a “substantial proposal” to try to secure the release of Griner and Whelan. Sources told CNN that proposal included a swap for convicted arms dealer Viktor Bout.

Griner’s wife, Cherelle Griner, told CNN that Friday’s meeting served as critical reassurance that the administration was committed to bringing her wife home from Russia.

“It wasn’t a meeting where the President told me the news that I want to hear,” Cherelle Griner said. “It wasn’t that, but it was one of those still pivotal meetings where… it allowed me to have confidence in what he’s doing right now.”

Cherelle Griner had pushed for months for this meeting, which occurred some seven months into Brittney Griner’s detainment in Russia.

Cherelle Griner said that Biden alluded to reporting in the media of the administration’s prisoner swap offer.

“I’m going to give credit where it’s due, and I feel as if this administration is putting a lot of manpower into ways to get BG home through negotiations,” she said. “Because it’s not as simple as one may think — of looking at the list of people we have and asking Russia to choose. It’s more complex than that and they are exhausting a lot of effort.”

“I don’t think they have quite figured out exactly what Russia wants in return for BG,” she added.

Paul Whelan’s brother, David, said Friday that “it means a lot” to his family that Biden showed “this continued commitment to securing Brittney Griner’s and Paul’s freedom.”

Writing on Twitter following his sister Elizabeth’s meeting with Biden, David Whelan said it “is hard for a family to have courage w/o @WhiteHouse @StateDept leadership to free their loved one.”

Elizabeth Whelan said in a statement Saturday that she had “complete faith” that the White House was “fully engaged and using the tools at their disposal” and called on the Russian government to “also engage in full faith, and free Paul Whelan.”

Cherelle Griner said she has been communicating with her wife through letters.

“She’s not well,” she said. “We’ve had some very disturbing communications about her venting about how she is at that moment, to the point where I was very concerned.”

“She’s losing it. We’ve reached that amount of days where even a strong person is like, ‘babe I don’t know how long I’m going to be able to take it,’” she added.

John Kirby, coordinator for strategic communications at the National Security Council, told CNN’s MJ Lee on Friday afternoon that the President is “not going to let up” over the ongoing detentions.

“He’s confident that this is going to remain at the forefront of his mind and his team’s mind, and that are going to continue to work this as hard as they can,” Kirby said.

Asked why Russia hadn’t already accepted a US offer for Griner and Whelan’s return, Kirby responded: “If we had the answer to that question, we might already have a deal. I think that’s a better question put to our Russian colleagues.”

“We made a serious offer, we want them to accept it,” Kirby said. “Frankly, these two individuals ought to be home anyway, period, but we understand that’s probably going to have to be the result of the negotiating process, one that we’re willing to participate in honestly, and fully and we’ve been doing that. We await them to take the offer that’s on the table.”

A senior administration official told CNN Thursday that there has been “movement but not breakthrough” on the efforts to secure the releases of Griner and Whelan. The official said that the US has urged Russia to put forward “a serious counteroffer” to the proposal on the table to secure the release of the two, but “we’ve not gotten a serious response back.”

The White House meetings come after CNN first reported earlier this week that former New Mexico Gov. Bill Richardson and his team were in Moscow and held meetings with Russian leadership.

The details around those meetings were not immediately clear. Richardson and his namesake center privately work on behalf of families of hostages and detainees.