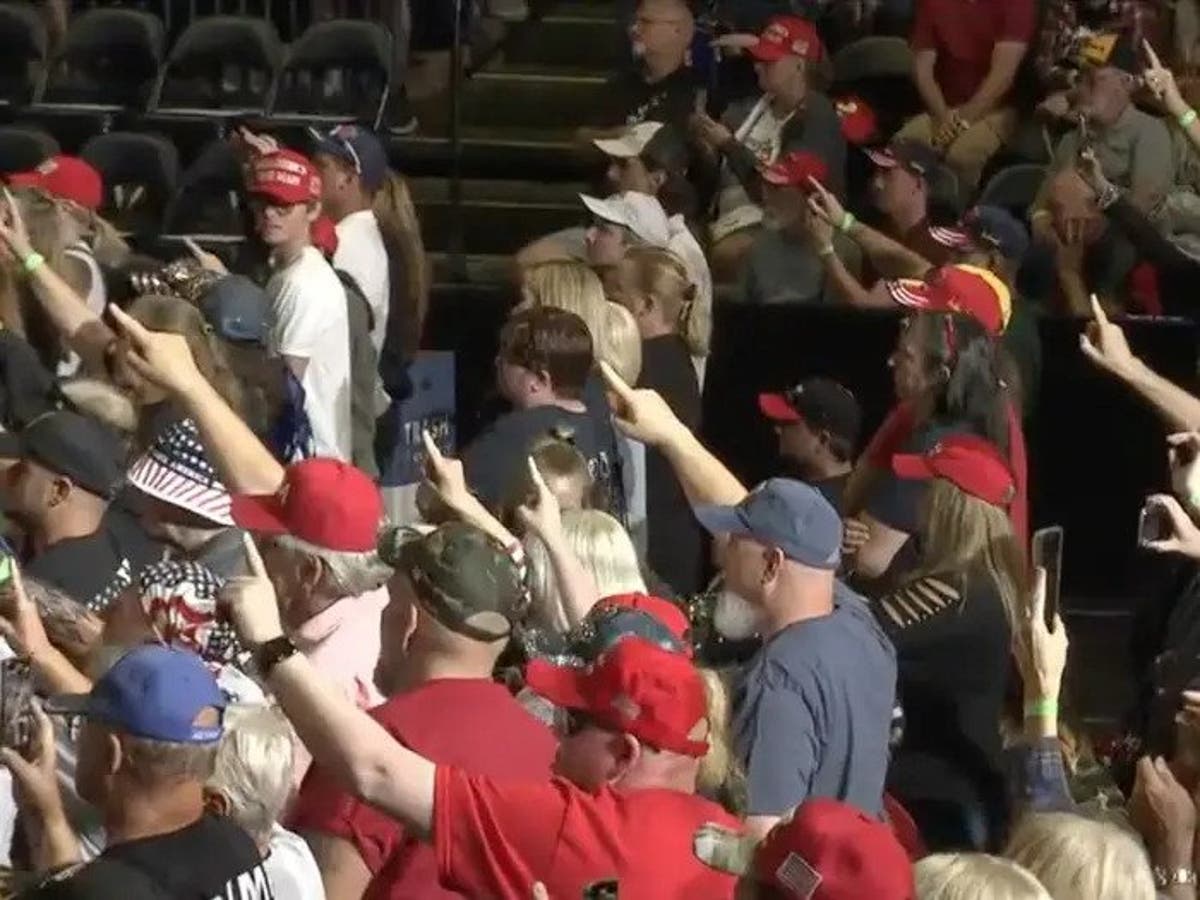 Donald Trump’s supporters raised their fingers in a bizarre straight-arm salute as the former president spoke at a rally in Youngstown, Ohio to boost Republican Senate nominee JD Vance.

As dramatic music played in the background, Mr Trump delved further into the depths of the baseless QAnon conspiracy theory.

Watchdog Media Matters noted that the song played at the rally appeared to have been released under the name Wwg1wga, which is the QAnon slogan. It stands for “where we go one, we go all”.

Media Matters researcher Alex Kaplan tweeted on Saturday that “Trump this summer used the song in a campaign-style video he posted on Rumble and Truth Social”.

“As they did when Trump previously used the song, QAnon figures are claiming the use of the song brings some kind of legitimacy for them,” he added.

One QAnon follower previously said the former president’s use of the song was “THE mother of all Q proofs” and “the biggest nod they’ve ever given us,” according to Media Matters.

Saturday’s Ohio rally also saw Trump supporters raise their fingers to the sky in a bizarre salute, which is also being described as a possible nod to the conspiracy theory.

The Daily Beast reporter Will Sommer tweeted on Saturday night that “this Trump rally finger salute is curious. Some on Twitter are calling it a QAnon salute, with 1 finger for ‘Where we go ,’ and Trump is playing a pro-Q song as he talks. I’ve never seen this happen before, though, so if it’s a Q thing it’s new”.

Ben Collins of NBC News tweeted that “not even Trump forums know why his followers held up one finger at his rally tonight. Some people think it’s for Where We Go 1 We Go All — the QAnon catchphrase. Others think it’s to symbolize America First. Whatever it is, it’s deeply weird and I haven’t seen it before”.

Mr Trump reposted an image of himself with a Q pin on his jacket on his Truth Social platform. The image included the words “The Storm is Coming”.

The storm is a conspiracy theory term within QAnon that refers day the day when opponents of Mr Trump are supposed to be executed en masse, Insider noted.

The Associated Press reported that around a third of the 75 accounts that Mr Trump has reposted on Truth Social have also promoted QAnon content.