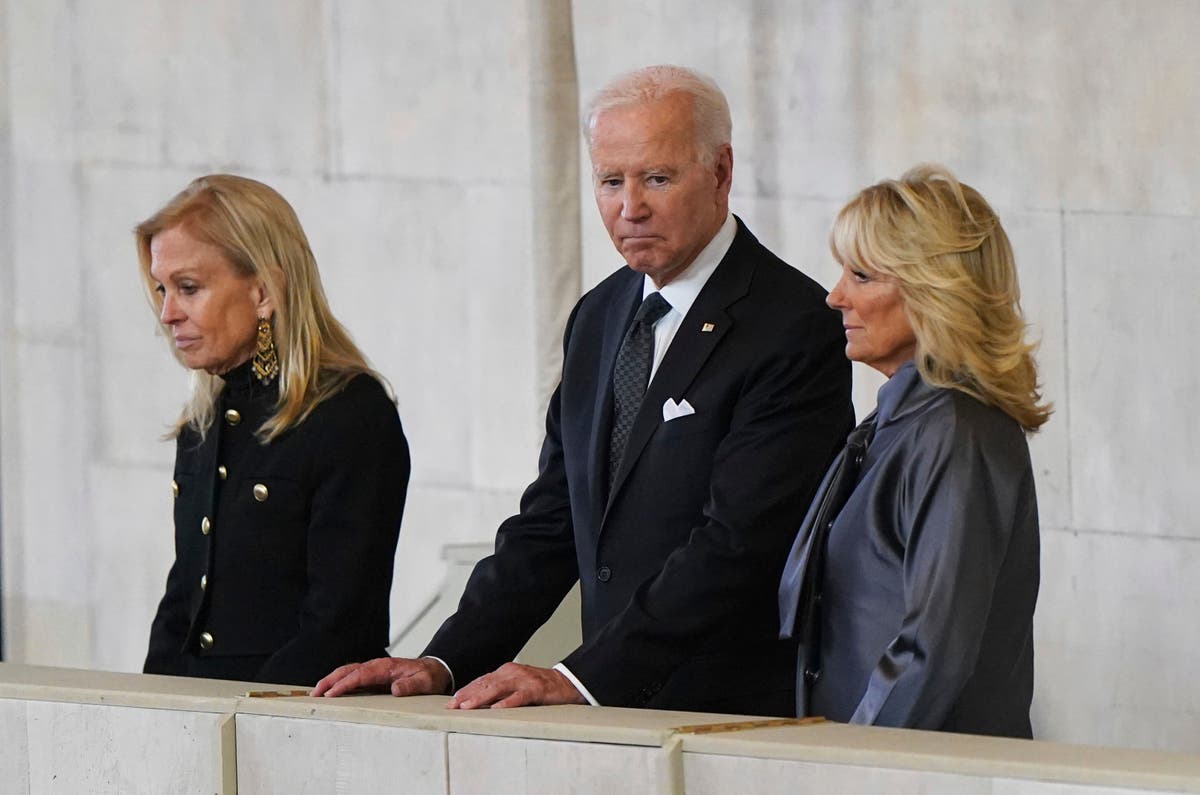 The Bidens arrived in London late on Saturday to pay their respects to the Queen as part of a series of events. Shortly afterwards, they signed the condolence book for the late monarch, who died last Thursday. They then attended a reception at Buckingham Palace.

“She was the same in person as her image. Decent, honourable and all about service,” the US president said.

“Our hearts go out to the royal family, King Charles and all of the family. It’s a loss that leaves a giant hole and sometimes you think you’ll never overcome it.”

He said he had told King Charles that his mother will be with him “every step of the way, every moment”.

“And that’s a reassuring notion. So to all the people of England, all the people of the United Kingdom, our hearts go out to you. You were fortunate to have had her for 70 years. We all were. The world’s better for her.”

Asked why he had previously compared the Queen to his own mother, Mr Biden said: “Just because of the way she touched when she leant over. She had that look like ‘are you OK, anything I can do for you, anything you need?’ But also, ‘make sure you do what you’re supposed to do’.”

On Monday, the president and Dr Biden will attend the state funeral before departing for the White House.

Mr Biden, who served as a United States senator for 36 years, first met the Queen in 1982 as part of a Senate delegation.

“And we were honoured that she extended her hospitality to us in June 2021 during our first overseas trip as president and first lady, where she charmed us with her wit, moved us with her kindness, and generously shared with us her wisdom,” he said in his statement upon her death.

“Queen Elizabeth II was a stateswoman of unmatched dignity and constancy who deepened the bedrock alliance between the United Kingdom and the United States,” he said at the time. “She helped make our relationship special.”

At a memorial for the anniversary of the 9/11 terrorist attacks, Mr Biden quoted her remarks shortly after the attacks where she said “grief is the price way pay for love.”

Mr Biden had touched down in London at 10 pm on Saturday evening. He was also scheduled to have his first meeting with the prime minister, Liz Truss, but the plans were cancelled on Saturday.

A full bilateral meeting is scheduled for Wednesday when the two are set to meet at the United Nations general assembly.