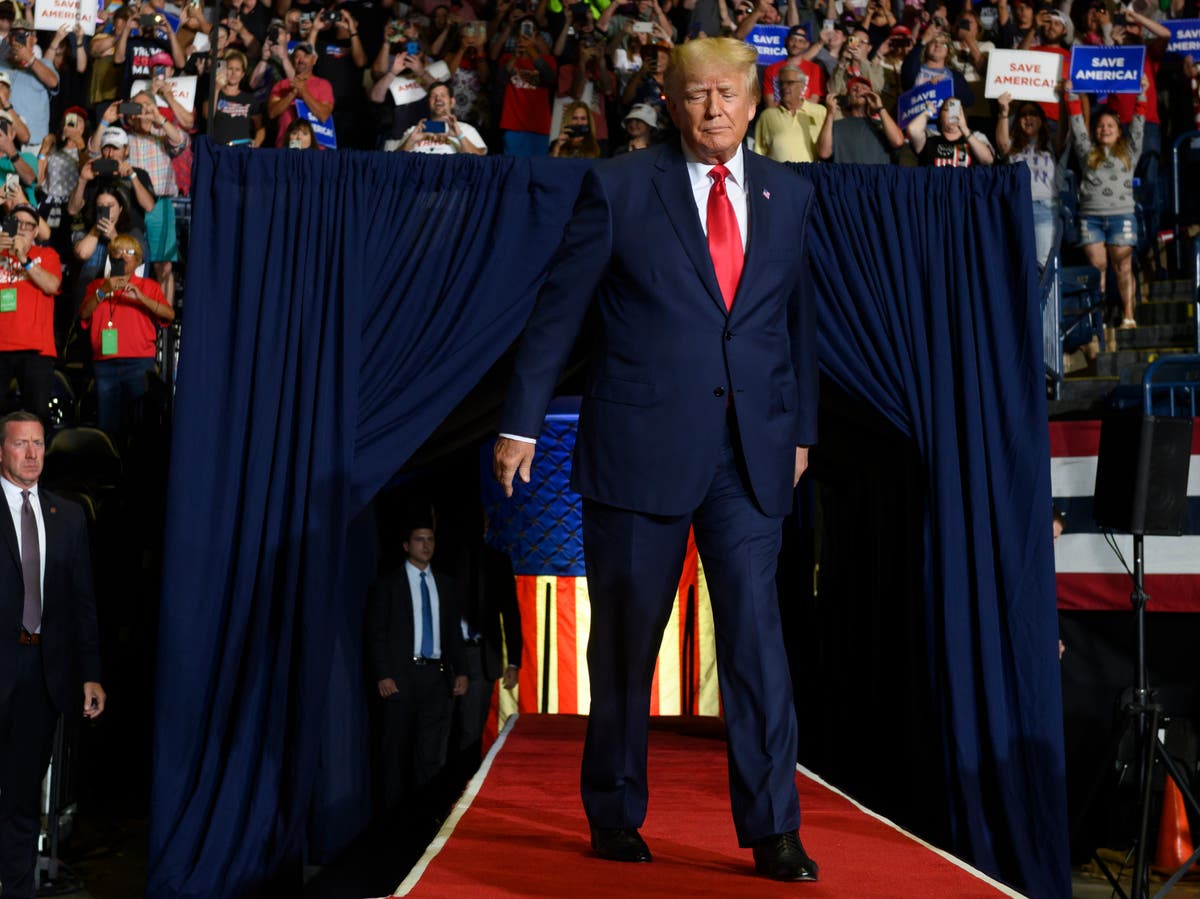 Donald Trump claimed CNN changed the background to a speech by President Joe Biden from red to pink “to make it look better” during a bizarre rally speech in Ohio.

“I watched Biden the other day,” he said before claiming CNN changed the lighting on Mr Biden’s 1 September speech in which he shared his worries for US democracy against a deep red background. Mr Trump claimed the broadcaster – a frequent target of his over the years – had changed the background from red to pink “to make it look better”.

Speaking in front of Independence Hall in Philadelphia, Pennsylvania, Mr Biden had warned, “as I stand here tonight, equality and democracy are under assault. We do ourselves no favour to pretend otherwise”

He used the word “democracy” more than 30 times in the speech.

“Maga Republicans do not respect the Constitution. They do not believe in the rule of law. They do not recognize the will of the people,” he said. “They refuse to accept the results of a free election. And they’re working right now, as I speak, in state after state to give power to decide elections in America to partisans and cronies, empowering election deniers to undermine democracy itself,” he added.

Mr Biden was criticised for having two US Marines stand behind him during the speech, even though Mr Trump had regularly had service personnel around him while making political speeches.

A former executive director at the Democratic Congressional Campaign Committee, Allison Jaslow, told CNN earlier this month that “we need to make sure that our military is as removed from politics as possible and it’s not right if a Democrat uses the military as a political pawn and it’s not right if the Republican Party does it as well. None of our politicians or elected leaders should do that”.

Mr Trump claimed on Saturday that Mr Biden was holding down gas prices ahead of the midterms in November and that prices would double and “go higher than anybody would believe” when the votes have been cast.

“The strategic reserves … are meant for war, not to keep prices down for an election,” Mr Trump said.

“Since the President authorized the historic release of one million barrels per day from the SPR earlier this spring, the Department of Energy has already sold more than 125 million barrels into the market, including nearly 70 million barrels that have already been delivered to purchasers and additional barrels planned to be delivered to customers in the weeks and months to come,” the White House said in a statement on 26 July.

“The Department of the Treasury estimates that as a result of these drawdowns both domestically and internationally, the price at the pump for Americans is up to about 40 cents per gallon lower than it otherwise would have been,” the administration added at the time.

“I will never quit because the fate of our country is at stake,” Mr Trump said on Saturday. “I don’t think we’ve ever had a more radicalised or dangerous time in our country.”

His rally on Saturday caused a backlash after dozens of supporters were seen performing a straight-armed salute with one finger raised, apparently a reference to the QAnon slogan “Where we go one we go all”. It came days after Mr Trump had shared a picture on social media of himself wearing a QAnon pin on his jacket and with a slogan associated with the conspiracy cult as a caption.