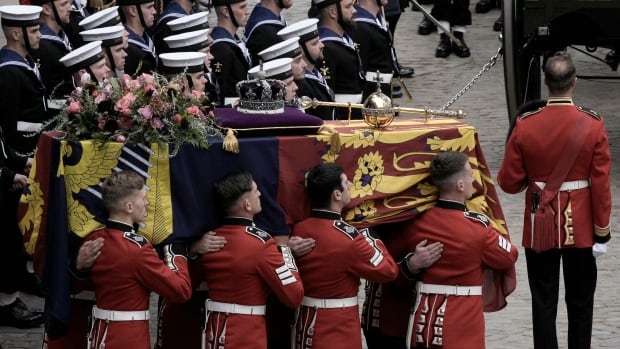 Britain and the world said a final goodbye to Queen Elizabeth II at a state funeral Monday that drew presidents and kings, princes and prime ministers — and crowds who massed along the streets of London to honour a monarch whose 70-year reign defined an age.

Elizabeth’s funeral procession arrived at the west gate of the medieval abbey shortly before the service at 11 a.m. local time. Pallbearers lifted the coffin from the state gun carriage and carried it inside the Gothic structure.

David Hoyle, the dean of Westminster, began the service offering prayers for her family and recognizing “her unswerving commitment to a high calling over so many years.”

The service, taking place where Elizabeth was married in 1947 and crowned in 1953, was attended by 2,000 people, including Prime Minister Justin Trudeau, U.S. President Joe Biden and French President Emmanuel Macron. In addition, about 200 members of the British public previously recognized during this year’s Queen’s Jubilee for volunteer efforts were in attendance.

Queen Elizabeth’s coffin travels by gun carriage to the funeral service at Westminster Abbey in London.

Justin Welby, the Archbishop of Canterbury, spoke at the service, telling the congregation that the grief felt by so many across Britain and the wider world reflected the late monarch’s “abundant life and loving service.”

“Her late majesty famously declared on a 21st birthday broadcast that her whole life would be dedicated to serving the nation and Commonwealth,” he said. “Rarely has such a promise been so well kept. Few leaders receive the outpouring of love that we have seen.”

You can watch live coverage of the Queen’s funeral right now on CBC TV, CBC News Network, CBC Gem, CBCNews.ca and the CBC News app. At noon ET, the broadcast will turn to Ottawa for a national commemorative ceremony.

CBC News Network will rebroadcast the funeral at 7 p.m. ET.

Near the end of service, two minutes of silence were observed in the Abbey and throughout the United Kingdom. The congregation then sang God Save the King, with a piper’s lament bringing the Anglican service to an end.

The service was being followed by a procession through the streets of London to take the Queen’s coffin to Windsor, where there will be a committal service and a private service for Royal Family members.

She will later be buried in the King George VI Memorial Chapel at Windsor Castle alongside her husband, Prince Philip, her parents and the ashes of her sister, Princess Margaret.

The new King ‘moved beyond measure’

A day packed with funeral events in London and Windsor began early when the doors of 900-year-old Westminster Hall were closed to mourners after hundreds of thousands had filed in front of the Queen’s coffin since Sept 14. Many of them had spent cold nights outdoors to pay their respects at the foot of Elizabeth’s flag-draped coffin in a moving outpouring of national grief.

The closing of the hall marked the end of four full days of the coffin lying in state and the start of the U.K.’s first state funeral since the one held in 1965 for Winston Churchill, the first of 15 prime ministers during Elizabeth’s reign. Two days before her Sept. 8 death at her Balmoral summer retreat, the Queen appointed her last prime minister, Liz Truss.

Monday has been declared a public holiday in honour of Elizabeth, who died Sept. 8 at 96. Her funeral will be broadcast live to over 200 countries and territories worldwide and screened to crowds in parks and public spaces across the U.K.

It is expected up to a million people will line London’s streets along the funeral procession route.

Police officers from around the country will be on duty as part of the biggest one-day security operation in London’s history.

On the evening before the funeral, King Charles issued a message of thanks to people in the U.K. and around the world, saying he and his wife Camilla, the Queen Consort, have been “moved beyond measure” by the large numbers of people who have turned out to pay their respects to the Queen.

“As we all prepare to say our last farewell, I wanted simply to take this opportunity to say thank you to all those countless people who have been such a support and comfort to my family and myself in this time of grief,” he said.

In Canada, on Monday, a commemorative ceremony will be held at Ottawa’s Christ Church Cathedral beginning at 1 p.m. ET. Live coverage from the Canadian capital begins at noon ET.