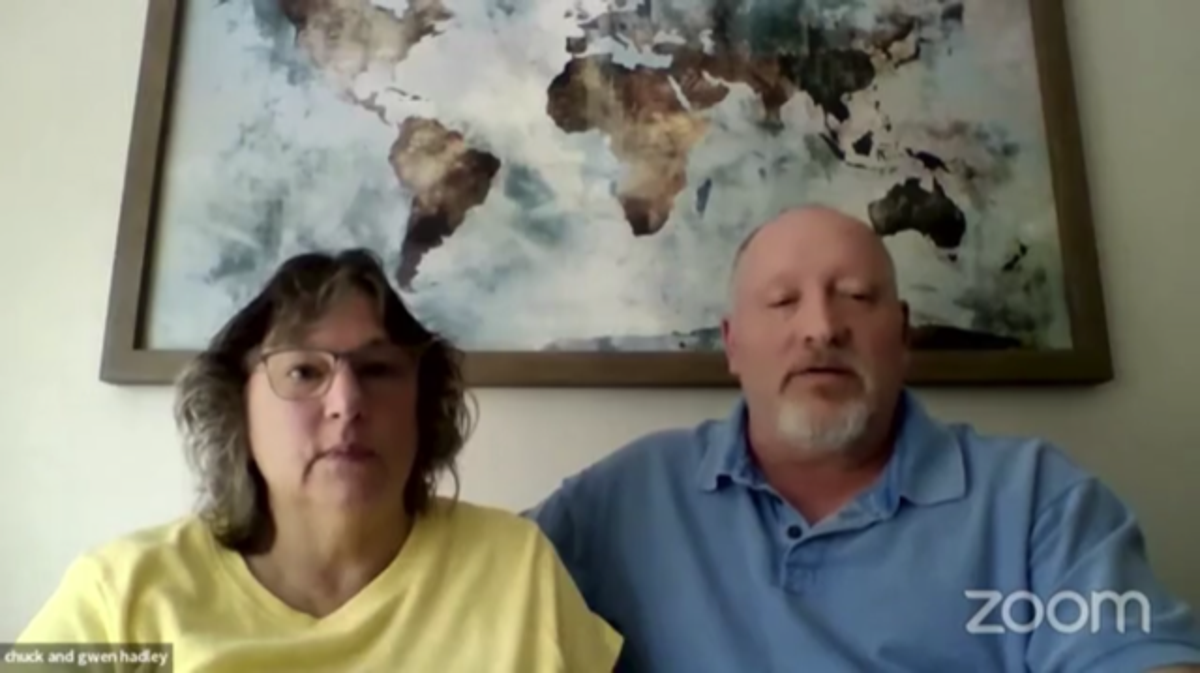 Victims and relatives of a Kentucky high school shooting 25 years ago gave tear-jerking testimony on Monday to lobby against parole for the offender who’s still in prison – while one student shot in the head argued for his release.

Michael Carneal, now 39, is serving a life sentence after murdering three girls and injuring five other people when he opened fire as a 14-year-old at Heath High School on 1 December 1997. While he has repeatedly appealed his sentence, unsuccessfully, the Kentucky Parole Board on Monday listened to live video victim impact testimony. They’ll hear from Carneal himself on Tuesday.

Carneal’s assault on the West Paducah school centred on students praying in the lobby before classes on the Monday after Thanksgiving break. Before the principal talked him down, Carneal used stolen guns to injure classmates and fatally shoot Nicole Hadley, 14; Jessica James, 17; and Kayce Steger, 15.

Nicole’s parents, brother and sister gave powerful testimony before the parole board on Monday.

Every appeal and hearing, Nicole’s father said, “has caused us pain … he has never shown remorse or taken responsibility for what he’s done.

“Not only did he kill Nicole, but he also killed Kayce and Jessice and tried to kill five more students,” Chuck Hadley said. “I believe the murderer should never be lout out of prison and should serve out the remainder of his life sentence.”

He pointed out that his whip-smart daughter had been shot in the forehead on that tragic day – and her mother echoed his belief in continued incarceration for Carneal.

“We – the families, survivors and people that were at the school and the whole community – were given a life sentence by the shooter and didn’t have the opportunity to get a second chance,” Gwen Hadley said.

“I personally won’t get to see Nicole reach her goals, get married, have kids and be an aunt,” she continued. “We as a family miss her at all family events. Nicole will always be missed.

Missy Jenkins Smith has been unable to walk since that day. She’s been paralyzed from the chest down since Carneal, who was her high school bandmate, shot her. She gave testimony arguing that Carneal should stay in prison.

“I want you to consider how long it’s been that he’s been taken care of by others,” Missy, now a married mother of two, told the board. “From the ag eof 14 years old to his present age of 39, he hasn’t had the responsibility to take care of himself and has been cared for for the past 25 years.

“How could anyone say with confidence he could to that for the rest of his life?” she asked, adding: “What if stressors in this new world begin to weigh on him – having trouble finding a job after jail time for murder or attempted murder, running into people who know who he is and what he did? How sure are we that he’d be able to handle this new world that’s changed around him? What if these problems affect him so much emotionally that he chooses not to take his medication? What if it affects him emotionally enough that his medications aren’t helping anymore?

“There are too many ‘What ifs” – to assume that he would be responsible enough to take care of himself and to not let his mental illness cause him to harm anyone again? Continuing his life in prison is the only way his victims can feel comfortable and safe without being haunted,” she went ont.

Hollan Holm, however – who was shot in the head by Carneal and still bears the scar on his hairline – argued for his attacker’s release.

“I was still a child,” said Mr Holm, who was 14 at the time of the shooting and will turn 40 in December.

“Everyone in the lobby of Heath High School that day, including Michael Carneal, was a child. It’s taken me 25 years to fully appreciate how little I knew on that day – how much of life I had not lived and how far from adult I was in my thinking and my capacity.

“I am a different person today than I was on that day. I’ve gone from that day to start a family and have a career.”

Still, Mr Holm did not make light of the ramifications of Carneal’s actions.

“I still have trouble being in crowds of people,” he said. “I get anxious when I’m seated in a restaurant with my back to the door, when a series of small fireworks or popping balloons approximates that deliberate pattern of the gunshots from that morning. I can feel the colour drain from my face in panic.”

Mr Holm was the lone vocal advocate for release as other victims and relatives spoke. Two members of the parole board will hear Carneal’s testimony tomorrow; if they cannot make a unanimous decision, the case will be sent to the full parole board for its meeting next Monday.

“It’s not just about this parole hearing,” said Andrew Hadley, the brother of Nicole, who was killed in the shooting. “It’s about a much larger picture. We were sentenced to a life of pain and suffering on that day that we lost Nicole, Jessica and Kayce and five others that were shot.

“He committed murder three times. It was thought out. He knew what he was doing, tried to kill five others … to this day, I still don’t understand why he even has the option of parole.”

Carneal’s defense focused heavily on bullying and mental illness, while his appeals centred very much on the latter. Missy Jenkins Smith wasn’t convinced and her testimony before the parole board bolstered that suspicion.

“I believe that Michael knew what he was doing the day of the shooting,” she said. “He brought five guns with him, three pairs of earplugs. He fired eight shots and hit eight different people, which in my eyes is a very difficult task.”

She asked the board to deny parole.

“I believe that he should have to spend the rest of his life incarcerated,” she said. “Nicole does not get a second chance. Why should he?”

Missy Jenkins Smith, after giving her testimony, told The Independent that she wants the parole board to truly weigh the testimony they’ve already heard.

“I’m just praying they will be able to reflect on what his victims said after they hear from him tomorrow,” she said.