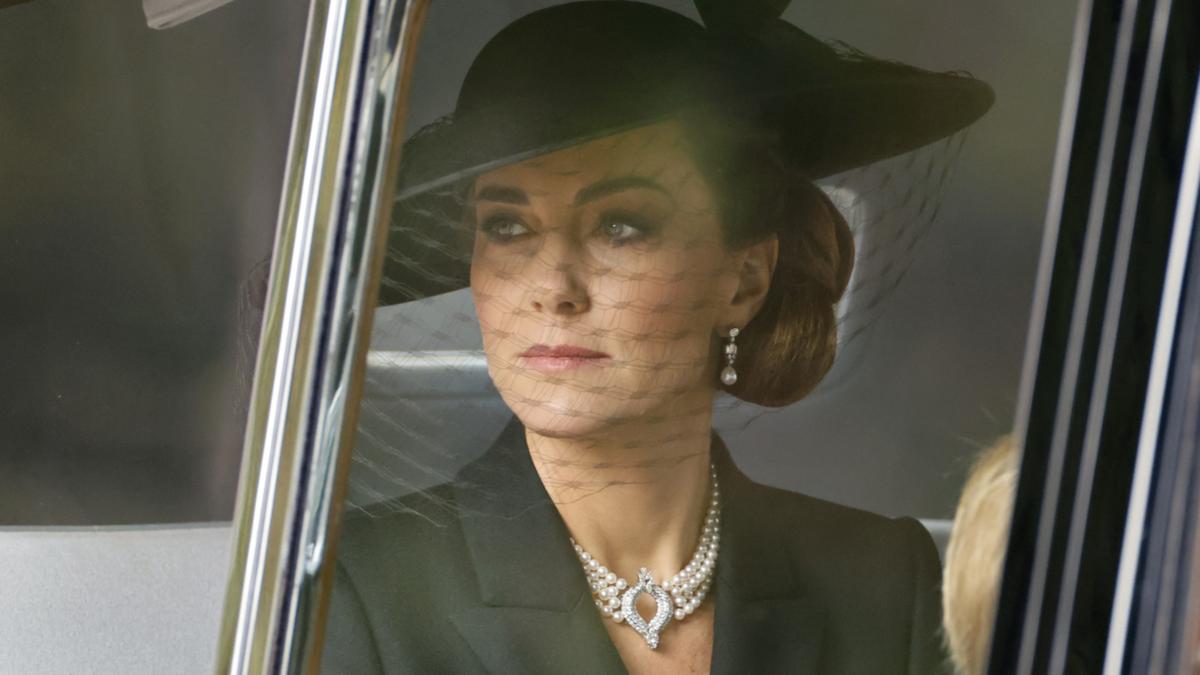 Amid the elegant ranks of mourners, one woman stood out in her quiet majesty.

For the Princess of Wales delivered a masterclass in royal dressing, invoking a tradition perfected by the woman they had all gathered to remember.

The Queen famously deployed the contents of her spectacular jewellery collection to honour nations, reflect a sense of occasion and remember loved ones.

And on Monday, from the diamonds embellishing her ears to the delicate strands of pearls shimmering at her neck, the Princess of Wales continued that tradition, paying a jewelled tribute not just to the Queen, but to the mother-in-law she never knew.

In the days since Elizabeth II’s death, an array of pearls and diamonds have adorned the women who loved the monarch best.

While white jewellery is traditionally worn to denote mourning — the ancient Greeks believed pearls were the teardrops of the gods — their choice also offered a tender reflection of the Queen herself, who wore these gems to the funerals of her father, mother, sister and husband, among others.

And what more touching homage to a much loved matriarch could there be than in the Princess of Wales’ decision to wear a necklace from the Queen’s own jewellery collection?

It is a piece of jewellery resonant with meaning.

For it was this choker that Kate borrowed from the late monarch to wear for the Queen and Prince Philip’s 70th wedding anniversary dinner in 2017.

The pearls were presented to the Queen by the Japanese government in the 1970s.

She then commissioned a necklace to be made from them incorporating a diamond clasp.

The Queen often wore the choker, including on a state visit to Bangladesh in 1983. And it was not just her granddaughter-in-law who had the honour of borrowing them.

The choker was also worn by the late Princess Diana for several public appearances.

Kate’s earrings, too, were the Queen’s.

The Bahrain pearl diamond drop earrings were crafted from two of seven pearls gifted to the Queen at the time of her marriage by the Hakim of Bahrain in 1947.

Kate completed her pearl ensemble with a three-strand pearl bracelet that belonged to her mother-in-law.

Designed by Nigel Milne, Diana wore it in 1989 when she toured Hong Kong with Prince Charles, and it was inherited by her eldest son upon her death.

Now, as the Royal Family mourns the loss of another beloved mother, it seems doubly poignant that, in a jewelled tribute to the line of succession, the newly appointed Princess of Wales chose to honour them both; the mother she never met, and the grandmother she loved so well.

Her daughter Charlotte, also paid a small but touching tribute to ‘Gan Gan’.

The seven-year-old wore a diamond brooch in the shape of a horseshoe, pictured, on her black pleated coat at the funeral.

The jewellery, a reference to the Queen’s love of the equestrian world, is thought to have been a present from the late monarch.

The princess has inherited her great-grandmother’s passion for horses and has been taking riding lessons.

Queen Consort Camilla wore the Hesse Diamond Jubilee Brooch on her tailored black coat dress as she stood by the side of her husband King Charles at Westminster Abbey.

The heart-shaped diamond brooch, which also contains three sapphires, once belonged to Queen Victoria and was a gift from her grandchildren for her Diamond Jubilee.

Prince Harry’s wife Meghan wore pearl earrings she had been given by the queen in 2018.

Lady Louise Windsor, the eldest daughter of the Earl and Countess of Wessex, wore a simple silver necklace with a horse pendant.