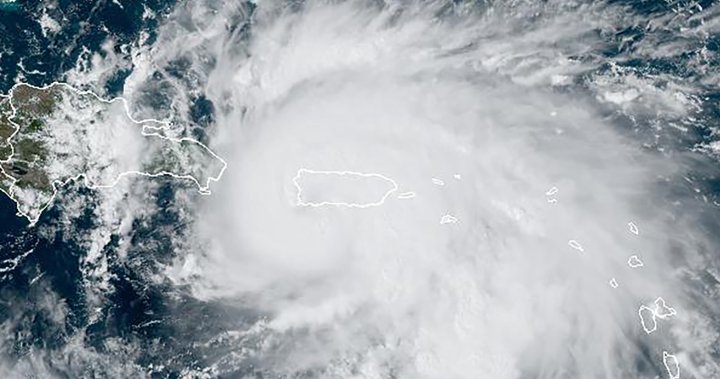 Hurricane Fiona has left behind a trail of destruction in the Caribbean as it continues to barrel toward other island nations this week.

Fiona, a Category 3 storm as of noon ET Tuesday, hit Turks and Caicos on Tuesday after bringing torrential rains and powerful winds to other countries in the region like Guadeloupe. Fiona is expected to make landfall in eastern Canada on the weekend, though the storm is expected to weaken by then.

As Fiona tracks north, the island nations of Puerto Rico and the Dominican Republic are reeling in the aftermath of the storm. Here’s a look at some of the damage hurricane Fiona has caused.

Puerto Rico, a territory of the United States, is still being lashed by strong winds, frequent lightning and heavy rain after hurricane Fiona made landfall there on Sunday afternoon. It brought up to 76.2 centimetres of rain in some areas.

The storm comes five years after Puerto Rico was ravaged by hurricane Maria, which triggered the worst power blackout in U.S. history. Almost 90 per cent of Puerto Rico remained without power on Monday, according to Poweroutage.us. It could take days to restore power to the entire island, officials said.

Mudslides and downed trees have blocked many roads. Images show submerged cars, people wading in waist-deep water and rescue boats floating down flooded streets. About 30 per cent of drinking water customers have service, officials said. Four hundred people were rescued from flooding in the southern town of Salinas, where rain slowed to a drizzle, officials said. Puerto Rico’s south and southeast regions were the hardest hit.

A 70-year-old man in the northern town of Arecibo died after his electric generator exploded as he tried to start it, police said. He is Puerto Rico’s first known casualty. A second man drowned, while police said an 88-year-old woman died of a heart attack.

Hurricane Fiona made landfall in the Dominican Republic on Monday morning near the eastern coastal town of Boca de Yuma, with its centre reaching the northern coast of Hispaniola before noon. The storm has displaced more than 12,400 people and cut off at least two communities.

Fiona is the first hurricane to directly hit the Dominican Republic since Jeanne caused severe damage in September 2004. One man was killed in a tree fall in the coastal town of Matancitas, north of capital Santo Domingo, officials said.

Hurricane Fiona left several highways blocked, and a tourist pier in the town of Miches was badly damaged by high waves. At least four international airports were closed, officials reported.

The Dominican president, Luis Abinader, said authorities need several days to assess the storm’s impact. He plans to declare a state of disaster in the provinces of La Altagracia, home to the famed resorts of Punta Cana, El Seibo and Hato Mayor.

“The damage is considerable,” Abinader said.

Where is hurricane Fiona tracking now?

Bermuda is the path of hurricane Fiona as it tracks north later this week, hurricane officials in the United States say. The U.S. National Hurricane Center said the storm is likely to strengthen further as it approaches the island nation by late Thursday.

Environment Canada, meanwhile, issued a tropical cyclone statement Tuesday for most of Atlantic Canada. Fiona is expected to “transform into a large and potent post-tropical storm by Saturday,” the national weather agency said in a statement.

There is currently an 800-kilometre range of uncertainty centred near eastern Cape Breton, it added. Environment Canada said the storm will become “quite large,” and the impact area will be broad. Southern offshore areas will feel the impact on Friday, and land areas of Atlantic Canada will feel it on Saturday.

The Canadian Hurricane Centre has been monitoring hurricane Fiona as of Sunday, although it said it’s too early to predict any detailed impacts. Fiona’s track shows it could affect Nova Scotia, P.E.I. and Newfoundland by this weekend.

— with files from Global News’ Karla Renić, The Associated Press and Reuters