More than 1,300 people have been arrested at demonstrations across Russia against President Vladimir Putin’s announcement of a partial mobilisation of civilians to fight in Ukraine, a police monitoring group said Wednesday.
The OVD-Info monitoring group counted at least 1,332 people detained at rallies in 38 different cities across the country after Mr Putin’s morning address to the nation.
The protests were the largest in Russia since demonstrations that broke out following the announcement of Moscow’s military intervention in Ukraine in February.
AFP journalists in the centre of the Russian capital Moscow said at least 50 people were detained by police wearing anti-riot gear on a main shopping street.
In Russia’s former imperial capital, Saint Petersburg, AFP reporters saw police surround a small group of protesters and detain them one-by-one, loading them onto a bus.

Protesters were chanting ‘No mobilisation!’ Russian police officers, one of them with letter “Z” on his uniform, a symbol of support of the military invasion in Ukraine, detain a protester during an unsanctioned anti-war protest rally on 21 September 2022, in Moscow, Russia. Credit: Getty Images

“Everyone is scared. I am for peace and I don’t want to have to shoot. But coming out now is very dangerous, otherwise there would be many more people,” said protester Vasily Fedorov, a student wearing a pacifist symbol on his chest.

“I came out to the rally planning to participate, but it looks like they’ve already arrested everyone. This regime has condemned itself and is destroying its youth,” said Alexei, a 60-year-old resident who declined to give his last name.
“Why are you serving Putin, a man who’s been in power for 20 years!” a young protester shouted at one policeman.
“I came to say that I am against war and mobilisation,” Oksana Sidorenko, a student, told AFP.

“Why are they deciding my future for me? I’m scared for myself, for my brother,” she added. Alina Skvortsova, 20, said she hoped Russians would soon understand the nature of the Kremlin’s offensive in neighbouring Ukraine.

“As soon as they really understand, they will come out onto the street, despite the fear,” she said.
The Interfax news agency quoted the Russian interior ministry as saying it had quashed attempts to “organise unauthorised gatherings”.

All the demonstrations were stopped and those who committed “violations” were arrested and led away by police pending an investigation and prosecution, it added.

Defence Minister Sergei Shoigu said Wednesday Russia would initially mobilise some 300,000 reservists, after Mr Putin in a televised address warned Moscow would use all available military means in Ukraine.

Flights out of Russia were nearly fully booked this week, airline and travel agent data showed Wednesday, in an apparent exodus of people unwilling to join the conflict.

US President Joe Biden tore into Vladimir Putin at the United Nations on Wednesday, hours after the Russian leader dramatically escalated his seven-month war in Ukraine by calling up 300,000 military reservists.
Mr Biden accused Mr Putin of “shamelessly” violating the UN Charter and castigated him over a threat to use nuclear weapons, warning that “a nuclear war cannot be won and must never be fought.” 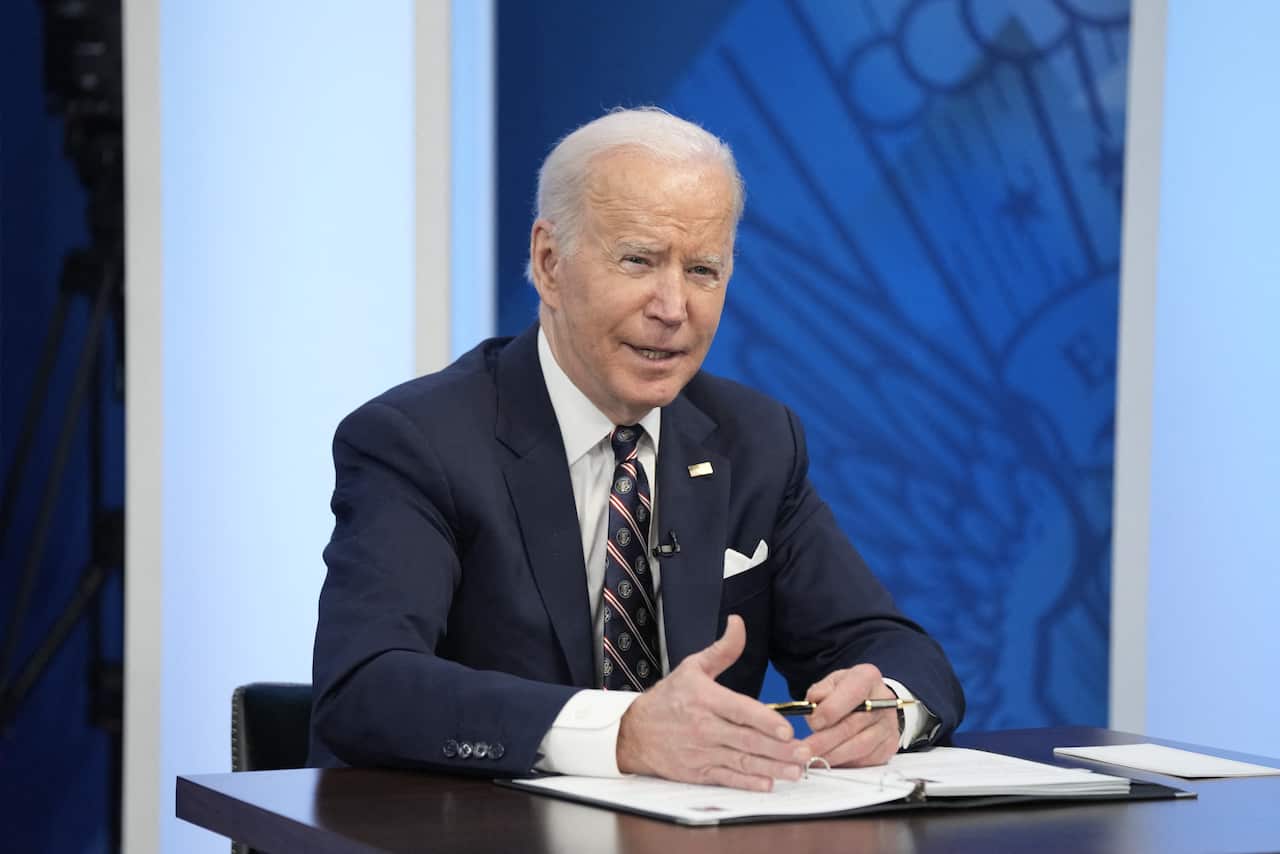 Russian forces have attacked Ukrainian schools, railway stations and hospitals, the US president said, to pursue a war aimed at “extinguishing Ukraine’s right to exist as a state.”

President Putin’s mobilisation order came as 10 prisoners of war — including two from the United States and five from Britain — were freed as part of an exchange between Russia and Ukraine.

The prisoners, who also hail from Sweden, Morocco and Croatia, were transferred to Saudi Arabia from Russia, Riyadh said, without specifying when they would be returned home.
But the diplomatic breakthrough did little to lower the temperature as Western leaders voiced outrage at Putin’s latest moves — and Moscow’s plan to stage annexation referendums this week in Russian-held regions of Ukraine.

Donetsk and Lugansk in the east and Kherson and Zaporizhzhia in the south are holding votes over five days beginning Friday — ramping up the stakes in the conflict by allowing Moscow to accuse Ukraine of attacking supposedly Russian territory. 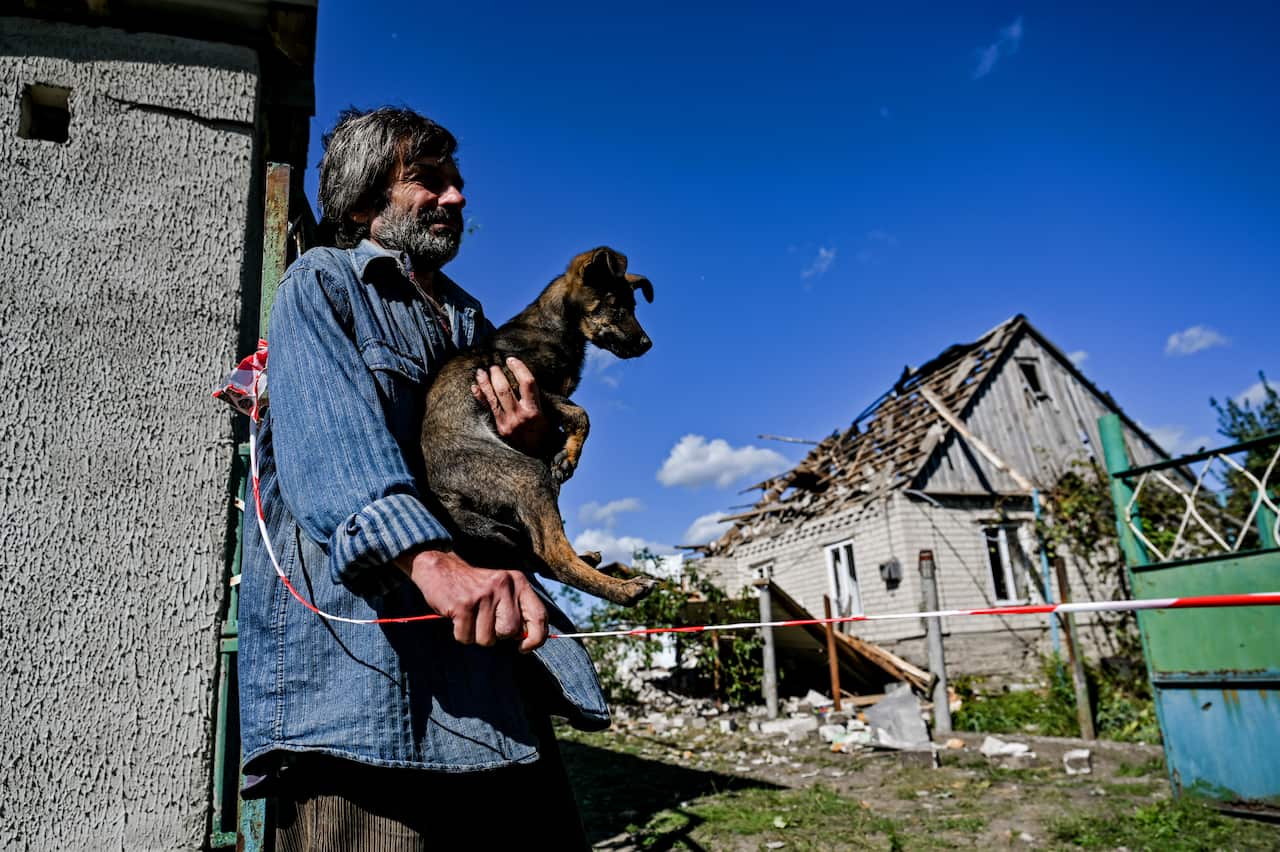 In a pre-recorded address early on Wednesday, Mr Putin accused the West of trying to “destroy” Russia through its backing of Kyiv.
Russia needed to support those in Ukraine who wanted to “determine their own future,” he said.

Mr Putin announced a partial military mobilisation, with Defence Minister Sergei Shoigu telling state television that some 300,000 reservists would be called up.

“When the territorial integrity of our country is threatened, we will certainly use all the means at our disposal to protect Russia and our people. This is not a bluff,” Mr Putin said.
“Those who are trying to blackmail us with nuclear weapons should know that the wind can also turn in their direction.”

But Ukrainian President Volodymyr Zelenskyy said in an interview released Wednesday that he did not think Mr Putin would resort to nuclear weapons.

“Tomorrow, Putin can say, as well as Ukraine, we want part of Poland, otherwise we will use atomic weapons. We cannot make these compromises,” he said.
On the sidelines of the UN gathering, French President Emmanuel Macron urged the world to “put maximum pressure” on Mr Putin, whose decisions “will serve to isolate Russia further.”

German Chancellor Olaf Scholz denounced the call-up as “an act of desperation” in a “criminal war” he said Russia could not win.

The sudden flurry of announcements by Moscow this week came with Russian forces in Ukraine facing their biggest challenge since the start of the conflict.
During a sweeping Ukrainian counter-offensive in recent weeks, Kyiv’s forces have retaken hundreds of towns and villages.

In a rare admission of military losses from Moscow, Mr Shoigu said on Wednesday 5,937 Russian soldiers had died in Ukraine since the launch of the military intervention in February. Ukrainian soldiers sit on a armoured personnel carrier (APC) on their way to the frontline against Russian troops in the Donetsk region on 21 September, 2022. Source: AFP / (Photo by ANATOLII STEPANOV/AFP via Getty Images)

‘Liberate us from what?’

As Mr Putin made his announcement, residents were clearing rubble and broken glass from a nine-story apartment block hit by an overnight missile strike in the eastern Ukrainian city of Kharkiv.
“They want to liberate us from what? From our homes? From our relatives? From friends? What else?” she told AFP. “They want to free us from being alive?” said a 50-year-old resident, who gave her name as Galina.

The referendums follow a pattern established in 2014, when Russia annexed the Crimea peninsula from Ukraine after a similar vote.

Like in 2014, Washington, Berlin and Paris denounced the latest ballots, saying the international community would never recognise the results.
“The Kremlin is organising sham referenda,” Mr Biden told the UN.

Beijing, which so far has tacitly backed Moscow’s intervention called on Wednesday for a “ceasefire through dialogue” and in likely reference to the referendums said the “territorial integrity of all countries should be respected”.

“We will destroy everyone who comes to our land with weapons — whether voluntarily or by mobilisation,” Ukrainian armed forces commander-in-chief Valeriy Zaluzhnyi wrote on Facebook.