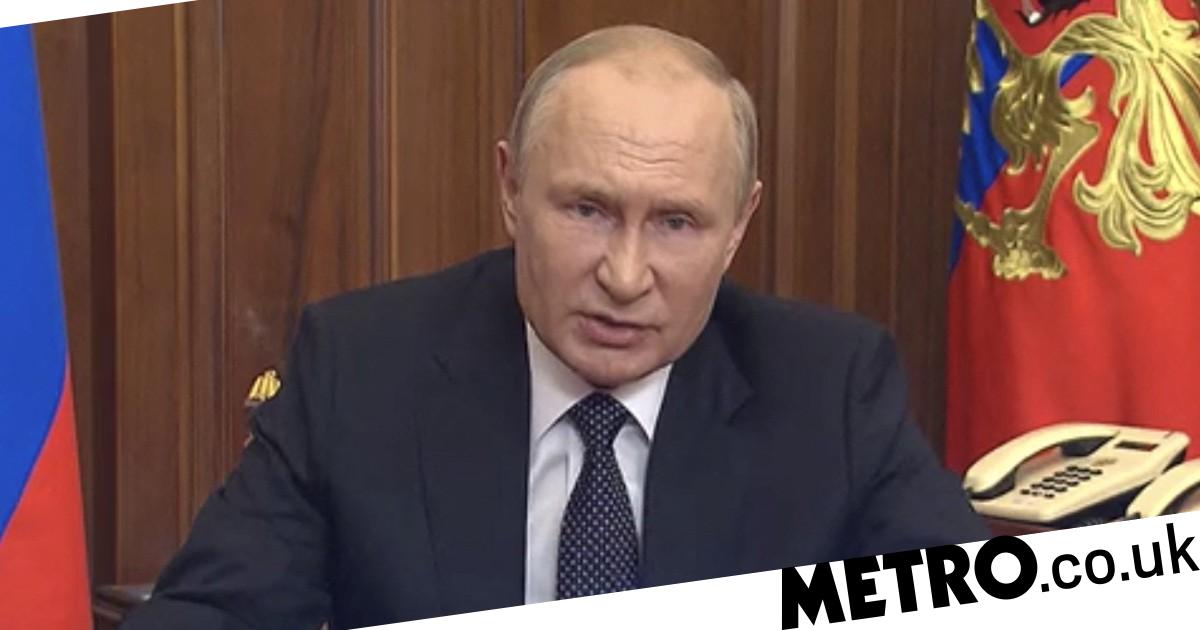 Vladimir Putin delayed his latest address to the nation to be urgently treated for ‘chest pains’, sources say.

People across the world had been poised last night to listen in to the latest announcements from the Kremlin.

But hours passed by without any sign of Putin and, eventually, it was confirmed the broadcast had been postponed until this morning.

In the eventual speech, chilling warnings were issued over Russia’s willingness to use nuclear weapons alongside details on the mobilisation of thousands of new troops.

Rumours have since spread that the 13-hour delay in issuing the broadcast came as doctors urgently treated Putin.

Medics tended to the Russian president behind the scenes of filming, the General SVR Telegram channel claims.

‘Shutting himself down to write the text of the appeal, Putin lingered by the time the recording began,’ claimed the account.

‘When the president came out and preparations for filming began, he began to cough frequently.

‘Several attempts to start recording an appeal were frustrated due to coughing.

‘After the fourth unsuccessful attempt to record an appeal, doctors were called to the president, to whom Putin also complained of chest pains.

‘The doctors advised to postpone the shooting and leave with them for examination, which was done.

‘There is an opinion of people from the president’s inner circle that Putin feigned a health problem in order to reschedule filming and rethink his decision-making.

‘People close to the president know his pathological indecision and uncertainty in making decisions, especially key ones.’

The claims have not been verified by Metro.co.uk.

In Putin’s announcement this morning, he ranted about purging Ukraine of ‘neo-Nazis’ and announced his support for referendums in various regions.

But for the thousands of Russians watching at home, the most notable element of the broadcast was the confirmation of plans to order army reservists into battle.

Around 300,000 people will be mobilised, defence minister Sergei Shoigu claims.

From today reservists – numbering 25 million – will also be banned from fleeing Russia.

The news has shocked even the closest confidants to Putin.

His top political and security officials reportedly ‘met the president’s decision without enthusiasm’.

The General SVR Telegram channel also routinely claims that the 69-year-old Putin is suffering from a serious illnesses such as cancer, Parkinson’s disease and a schizoaffective disorder.

‘The terminally ill Putin has an overwhelming desire to take millions of people to the grave with him,” it posted

‘Today Putin has brought war into every Russian’s home.’

Speculation about the Russian leader’s mental and physical wellbeing have come into sharp focus since he invaded Ukraine in February.

Footage of Putin with ‘trembling hands’ spread even before the conflict, fuelling the rumours.

The 69-year-old seemed unsteady on his feet and his thumb appeared to spasm as he met with his Belarusian ally Aleksandr Lukashenko.

Visegrad24, which first published the footage, claimed it was ‘probably the clearest video of something being wrong with Putin’s health.

More recently, a video emerged from an awards ceremony in the summer which showed the tyrant’s shaky legs.

While later giving a speech, his legs appear to buckle several times as he grips the podium with his hand for support.