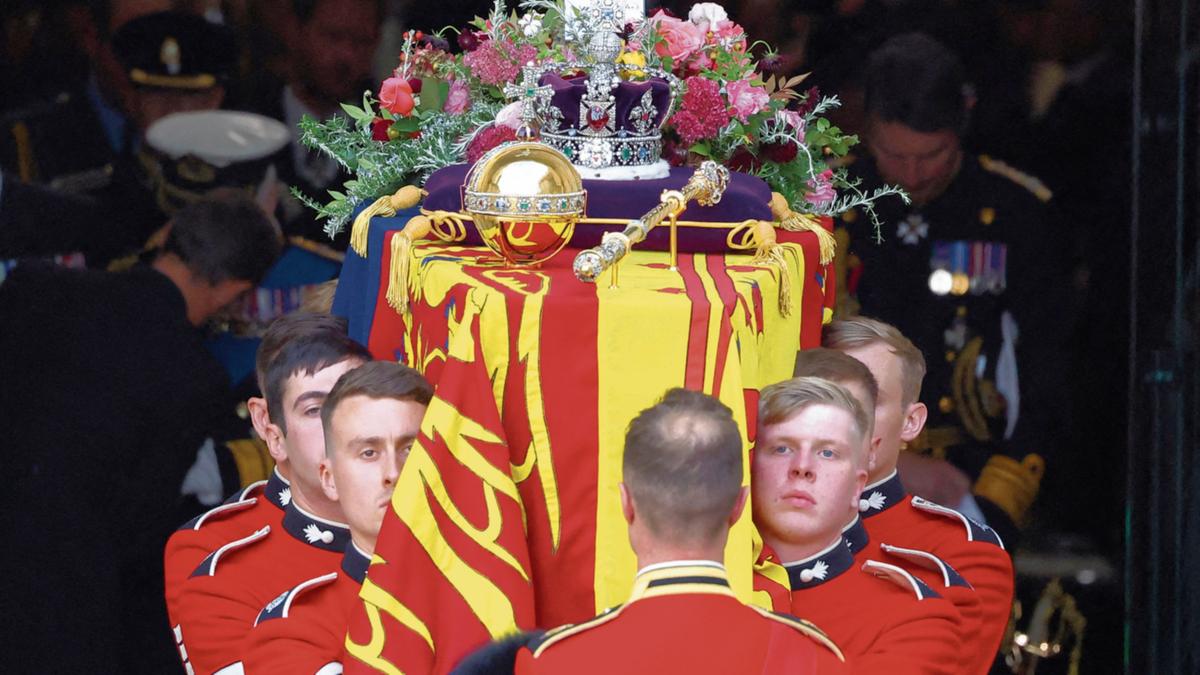 Among the 10 pallbearers at the Queen’s state funeral were two teenagers, a bodybuilder and a keen surfer, it can be revealed.

Relatives and friends of the Grenadier Guards expressed immense pride last night after the young soldiers faultlessly carried out their duty in front of billions around the world.

They spoke as calls grew for the group of men to receive MBEs for their role in Her Majesty’s funeral.

The bearer party, from the Queen’s Company, was led by Company Sergeant Major Dean Jones, a married father-of-one who has served in the unit for 19 years.

He completed two tours each in Iraq and Afghanistan and will return to his duties imminently.

CSM Jones led the team as they carried the Queen’s 500lb, leadlined coffin into Westminster Abbey and later up the steep steps of St George’s Chapel in Windsor.

Some of the guardsmen had been brought back from active service in Iraq just days earlier to carry the coffin.

The youngest members of the group were star ex-cadet Guardsman Fletcher Cox and Guardsman David Sanderson, both 19.

Gdsm Cox was a cadet in his native Jersey, where he won the prestigious position of Lt-Governor’s Cadet in 2018. Peers have described him as “a real underdog” who once said his “sole ambition” was to become a guardsman and parade for the Queen.

Gdsm Sanderson’s father told the Daily Mail last night of his pride at his son’s key role in a “piece of history”.

Peter Sanderson, 56, from Morpeth, Northumberland, said: “It’s an incredible weight on his shoulders, not just literally but figuratively. He’s only 19 now but he joined the army at 16, his whole military career has been with the Grenadiers.

“He kept everything secret. It wasn’t until we saw him in the press after a photographer took a picture of the rehearsals that it was confirmed.”

Lance Corporal Tony Flynn, 23, carried out his role in the funeral just a few months after he married his wife, Hayley, in May.

The couple live together in Aldershot, Hampshire. Friends and relatives joined an outpouring of support for “laid-back” LCpl Flynn for “doing our whole family proud”.

Second Lieutenant Freddie Hobbs, 24, from West Sussex, was positioned at the rear of the bearer party and gave the orders.

The keen cricketer was one of those brought back from Iraq. Guardsman Luke Simpson, 20, from Selston in Nottingham, was in the Army cadets as a teenager before joining the Queen’s Company.

His father, Mark Simpson, said: “We had a tear watching, but they have all done us proud. It’s been an honour to watch this and see them all doing their best for the country and the Crown.” Selston Football Club said on Facebook.

“Flawless under pressure with the whole world watching on. You have done your country, village, family and friends proud!”

Lance Sergeant Elias Orlowski, 26, was transferred from the London Guards to the Grenadiers and is understood to be a member of the regiment’s ski team.

He is also a dog-lover and has many tattoos. Guardsman James Patterson is a bodybuilder who has shared several photos of his muscular physique online.

He marched at the rear of the eight-strong bearer party as it was carried to St George’s Chapel. Lance Sergeant Ryan Griffiths, 28, has a young child with his partner and enjoys surfing in his spare time.

Lance Sergeant Alex Turner, also 28, carried the coffin from the front as it was placed on the catafalque inside St George’s Chapel.

His mother, Debbie, often proudly shares photos of her son online, including one from June 2019 of LSgt Turner marching at Windsor Castle in his uniform and bearskin.

All of the troops have been ordered not to comment personally until the period of royal mourning ends on Monday, September 26. SAS Gulf War hero Chris Ryan last night joined calls for the pallbearers to receive medals.

Mr Ryan, who marched 190miles to safety after being captured by Iraqi troops, said: “I support 100 per cent any campaign to ensure these young men are appropriately rewarded, such as with MBEs.

“This was not an easy task, physically, mentally or emotionally; the eyes of the world were upon them. They handled Her Majesty’s coffin with the grace and composure she deserved after a lifetime of service.”

The call has been backed by the former head of the Army, Lord Dannat, and many MPs and celebrities.