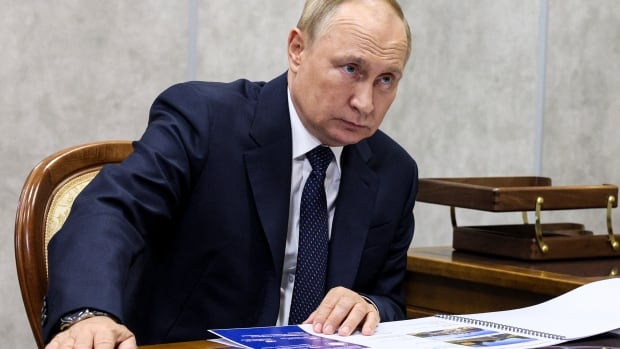 It’s been called the nuclear blackmail card — both within western diplomatic and defence circles and in Russia itself.

And it’s a reference to President Vladimir Putin’s poker-faced threat on Wednesday to resort to weapons of mass destruction if NATO steps over the line or Ukraine reclaims more of its own occupied territory.

Insisting that “this is not a bluff,” Putin warned that he has many such weapons at his disposal.

What might not be apparent from all the screaming headlines that followed — and from Putin’s order to partially mobilize his country’s military — is that his bluff is already being called in some respects. Ukraine believes he’s playing with a hand that has grown increasingly weak.

The thinking in the Kremlin, according to a number of experts, is that Moscow’s call for four referendums in the Ukrainian provinces its troops now occupy but do not fully control — Luhansk, Donetsk, Zaporizhzhia and Kherson — would formally draw them under Mother Russia’s nuclear security dome.

The Russian military’s nuclear doctrine says the Kremlin is justified in using all means at its disposal if the army faces a conventional defeat on its own soil.

In the eyes of military experts who’ve been following the campaign, what’s been happening on Ukrainian soil in the east is more like a rout than a defeat — with Russian troops abandoning tanks and troop carriers and hitching rides to the border.

Christian Leuprecht, a professor at the Royal Military College of Canada, said the Kremlin seems to fear that if it doesn’t “hold those farcical referenda in the next 10 days or so, there won’t be a referendum for them to hold.”

The nuclear threat may be Putin’s way of pressuring the West to lean on the Ukrainians to open negotiations, he said. Turkish President Recep Tayyip Erdogan said this week he believes the Russian leader wants to end the war he began in Ukraine “as soon as possible.”

“Why would the Ukrainians negotiate with the Russians at this point?” Leuprecht asked.

Dominique Arel, chair of Ukrainian Studies at the University of Ottawa, said Putin has been waving the nuclear blackmail card from the beginning and it hasn’t deterred NATO from arming Ukraine. Nor has it stopped the Ukrainian counteroffensive, including attacks in Crimea, which was formally annexed by Russia.

“[Crimea has] been occupied since 2014,” said Arel in a recent interview. “You could say, ‘Well, Crimea is actually Russia, [but] they haven’t responded with nuclear weapons.’”

Russian military installations in the occupied peninsula were attacked twice over the summer. Ukraine will neither confirm nor deny that it was behind the bombings.

“I don’t think it’s a factor for Ukrainians, one bit, this nuclear blackmail,” Arel said. “And my reading is, it’s not affecting the military calculus of Western allies …

“It will have zero impact in terms of the determination of Ukrainians to hit territories that they believe are theirs … Whether Russia claims that it’s now Mother Russia, it’s no difference.”

Melinda Haring, deputy director of the Atlantic Council’s Eurasia Center, questions how Russia could hold referendums at all.

Indeed, the process is murky.

Denis Pushilin, the pro-Moscow leader of Donetsk, recently told Russian media that election officials would canvas door-to-door and people would also be able to vote in designated “public spaces.” There are suggestions of online voting in other jurisdictions.

The reality, though, is that people would be voting at gunpoint under the watchful eye of the Russian military.

“There’s a lot of explosions in the places where Russia had been planning to hold them and honestly, I don’t think it makes sense from a strategic perspective, to hold referendums in a … few small villages,” Haring said.

Arel agreed with her assessment and said the areas where Moscow wants to hold the votes — areas that may have had some pro-Russian sentiment before the onset of major fighting — are now increasingly hostile toward Moscow because of the war.

“Support is virtually non-existent. I don’t know, five per cent, maybe 10 per cent, if you bribe people and people are fearful and so forth,” Arel said.

“The question now becomes, will they even have the capacity to conduct a referendum?”

Seven months of brutal warfare on the streets and in the fields of Ukraine has also raised questions about whether the Russian military has the capability to absorb and effectively use the 300,000 reservists Putin has called to duty.

It’s an enormous gamble, said Leuprecht. He asked “whether the Russian armed forces would even be capable of mobilizing, I mean, given that they can’t train the recruits that they have now and equip them.

“How are they actually going to deal with the mass mobilization?”

The experiences of the last six months appear to have had “almost zero impact on the Russian forces’ ability to perform on the battlefield,” he added.

The Washington-based Institute for the Study of War, which has tracked daily developments in eastern Europe, said Wednesday that Putin appears to be quietly trying to put some steel into the spine of his army by introducing “new and harsher punishments in an effort to contain the risk of the collapse of Russian military units fighting in Ukraine and draft-dodging within Russia.”

A new law was introduced in the State Duma on Tuesday that, in the institute’s words, “codifies dramatically increased penalties for desertion, refusing conscription orders, and insubordination.”

Putin, in other words, is telling Russian soldiers to fight to the death — or else.