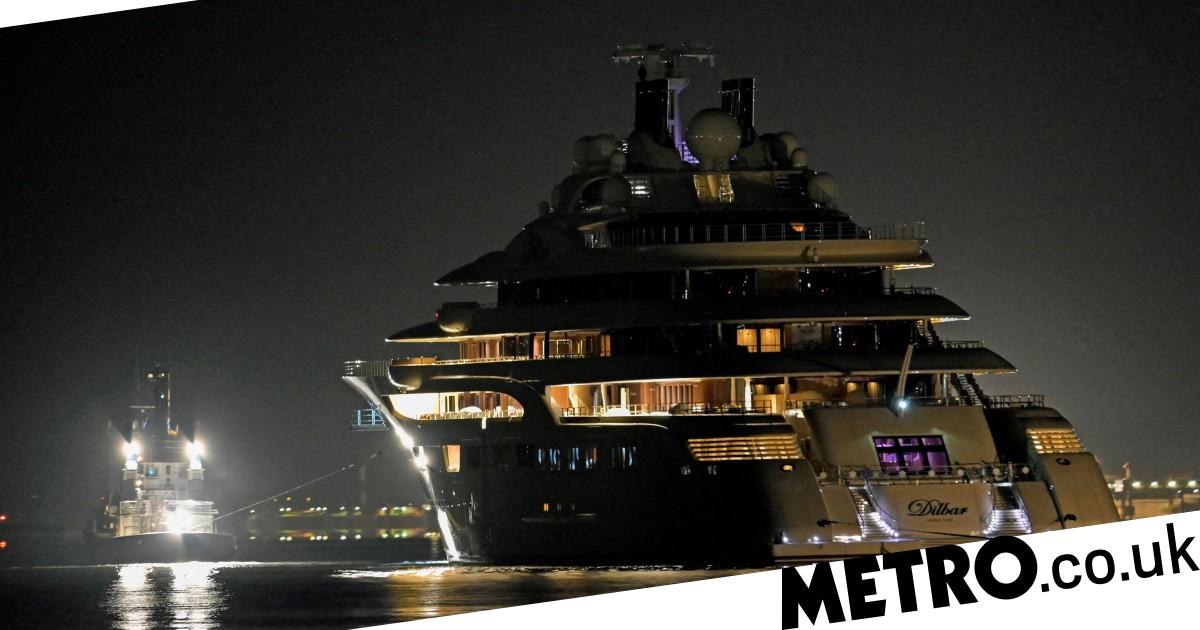 A multi-million-pound superyacht reportedly tied to a prominent Russian oligarch has been towed by German authorities.

Mr Usmanov, 69, was added to the European Union’s sanctions list in the wake of Russia’s invasion of Ukraine.

The 500-feet superyacht Dilbar, seized in March, was towed from the port of Hamburg to Bremen Tuesday night.

Considering the vessel spans three times the length of an Olympic swimming pool with two helipads, a garden and more, shipbuilder Lürssen moved it to its headquarters on the Weser River to free up space.

Mr Usmanov, among the world’s 100 wealthiest people, is currently under investigation for suspected money-laundering.

Yesterday more than 250 officers searched an abandoned lakeside villa with ties to Mr Usmanov in the upmarket holiday town of Rottach-Egern, Tegernsee.

Mr Usmanov’s press service said in a statement: ‘Any allegations of tax evasion by Mr Usmanov are unfounded, false and damaging to his honour, dignity and reputation, which Mr Usmanov will defend by all disposable legal means.’

He is at the centre of two separate investigations into his finances in Germany.

Frankfurt prosecutors claim the businessman has used his ‘extensive and complex network of companies and corporations’ to disguise multi-million-euro transactions between 2017 and 2022.

Among them are his properties and his superyacht, they claim.

‘The properties concerned are in family trusts, of which Mr Usmanov is not a beneficiary.’

The Dilbar, said to be worth nearly half a million pounds, was placed into a trust that federal police say has one beneficiary: Mr Usmanov’s sister Gulbakhor Ismailova.

Mrs Lavorva, the wife of Russia’s foreign minister Sergey Lavrov, is also on the sanctions list.

The vessel is flagged in the Cayman Islands and registered with a holding company in Malta, both being go-to tax havens of the ultrarich.

The superyacht is named after Mr Usmanov’s mother.

The Dilbar was initially detained in Hamburg as a temporary measure until April when Bundeskriminalamt, the federal police force, detained it.

In a separate probe, the Munich state prosecutor has alleged Mr Usmanov of hiring a security company to observe properties in Upper Bavaria financially linked to him.

Mr Usmanov is one of the most influential powerbrokers in Russia, owning metals conglomerate Metalloinvest, media company Kommersant and mobile phone provider Megafon.