Social media feeds have been flooded in recent days with images of women taking to the streets in Iran and burning their hijabs in a public act of defiance against the government’s rules, and without the legal right to protest.
Five days of protests have rocked Tehran and Kurdish regions of Iran since . 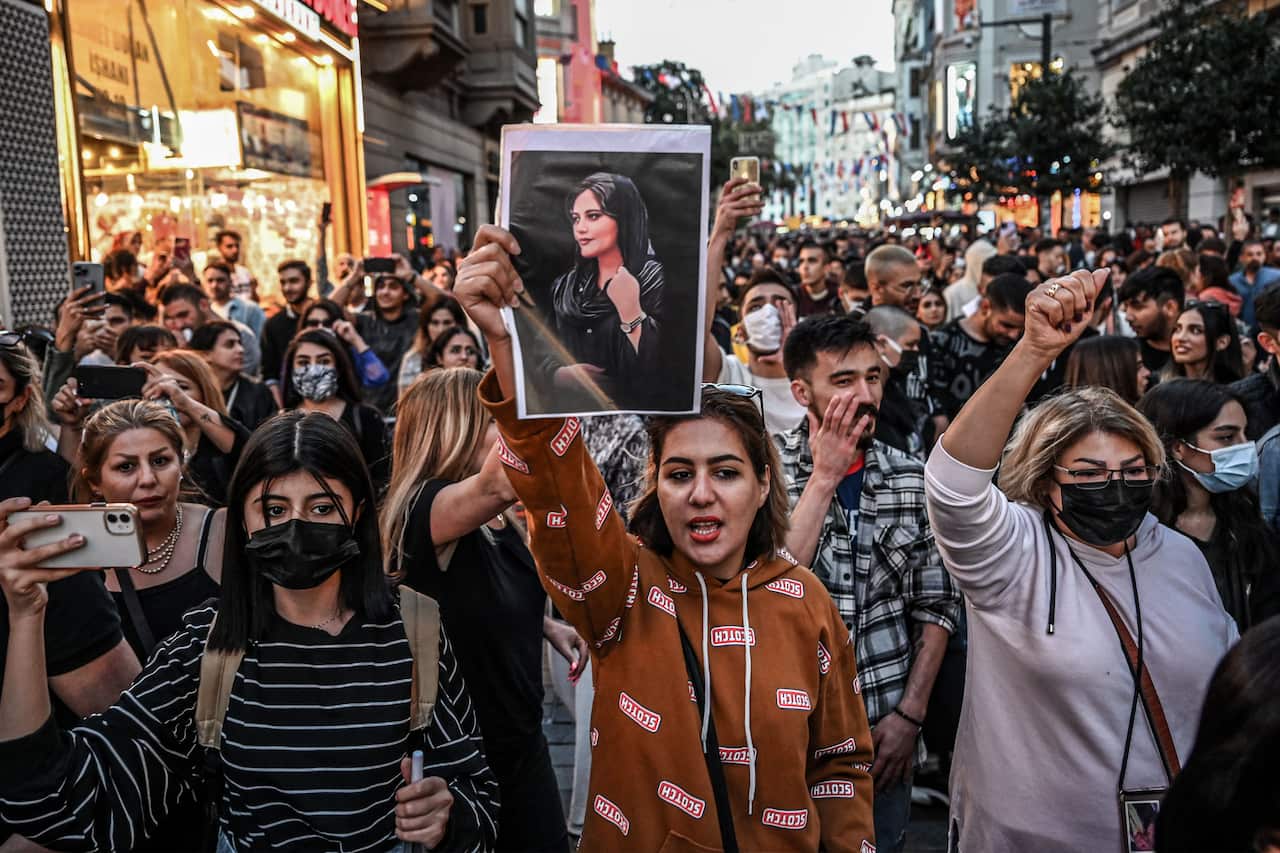 A protester holds a portrait of Mahsa Amini during a demonstration in Turkey to support the young Kurdish woman who died after being arrested in Tehran by the Islamic Republic’s morality police. Source: Getty / Ozan Kose

Following her death in detention, the events that are unfolding in Iran, particularly in the province of Kurdistan, have been described as “explosive” by academics.

But why was Ms Amini detained in the first place, what are Iran’s rules around the hijab and how will women face the consequences of their protests?

Who is Mahsa Amini, the woman who died in detention?

Mahsa Amini is a 22-year-old woman from the Kurdish province of Iran. She was in Tehran with her brother when she was reprimanded by Iran’s morality police – known formally as the ‘Guidance Police’ or the Gasht-e Ershad – due to her “improper” wearing of the hijab.

She was detained for three days in Vozara Detention Centre when she fell into a coma and died. Local police have denied allegations she was beaten, asserting she suffered a heart attack in detention. It’s a claim her family contests, and her parents publicly declared Ms Amini was fit and healthy before her arrest.

“Based on detailed investigations, since her transfer to the vehicle and also at the location [station], there was no physical encounter with her,” a police statement said.
Her death has sounded the alarm from various human rights groups, including the United Nations, which heard Iranian president Ebrahim Raisi speak at the General Assembly for the first time on Wednesday. In his address, he remained silent on Ms Amini’s death.

“Mahsa Amini’s tragic death and allegations of torture and ill-treatment must be promptly, impartially and effectively investigated by an independent competent authority,” Nada Al-Nashif, the acting UN high commissioner for human rights, said on Tuesday in a statement.

Are women in Iran forced to wear the hijab?

Since the 1979 Iranian revolution, all women in Iran are legally required to wear a hijab in adherence to the government’s interpretation of the Islamic body of law, Sharia. According to the country’s law, women’s hair and necks must be covered while wearing loose-fitting clothing.
Failure to wear the hijab in accordance with Iran’s laws can land women in jail, fined or physically abused by the morality police.

Research professor of Middle East and Central Asian Studies at Deakin University, Shahram Akbarzadeh, said violence against women who “test the boundaries” of the hijab is not new. But the violence has intensified under the ultra-conservative government headed by Mr Raisi since his election win in 2021.

Professor Akbarzadeh said the Iranian government’s desire to impose its understanding of Sharia on a progressive society has become a “major political challenge” where women are increasingly vocalising their will to choose how to dress.
In Islam, it is widely interpreted that Muslim women are required to wear the hijab, but it should be of their own volition. According to the religion, no person or institution should force women to wear the hijab.
But as Iran brands itself as a nation enshrining Islamic values in its legislation with harsh penalties, the separation between religion and politics has become blurred since the 1979 revolution.
“Controlling women’s bodies is a major obsession for Islamists,” Professor Akbarzadeh said. “Because if they can control women’s bodies, that’s a good way of controlling society.”
Alam Saleh, lecturer in Iranian Studies at the Australian National University, said Iran’s tight hold on the hijab mandate does not necessarily represent the values of the religion of Islam. Rather, it indicates a symbol of legitimacy and control over its constituents.
“For the regime, hijab is not only a religious matter, it’s a political issue,” he said.

“[Iran] considers its duty to promote Islam and Islamism. As a result, if its own people do not care about Islamic norms and values, that would undermine its political legitimacy.”

Why are women burning the hijab?

On social media, images and videos are being posted of women in various provinces of Iran burning their hijab in solidarity with Ms Amini. Some women are even chopping locks of hair in protest against the regime’s requirement to cover themselves.

Professor Akbarzadeh said women in Iran are sending a clear message.
“They’re saying they have had enough. How much can they take? How much blood can be shed? Enough is enough,” he said.

In Iran, there is no legal right to protest against the government. As such, these women could be fined, imprisoned or abused for their actions on the streets.

“At this point in time, they don’t really care if there is a knock on the door in the wee hours of the morning by security forces who have identified them on social media and have come to take them to prison.
“They’d rather die than continue living like this.”
According to internet monitoring organisation NetBlocks, Iran is experiencing major internet connection disruptions, with major mobile networks shut down and Instagram and WhatsApp severely restricted since 19 September.

Dr Saleh said that Ms Amini’s “catastrophic” death was merely a trigger for a culmination of crises that have unfolded in Iran. 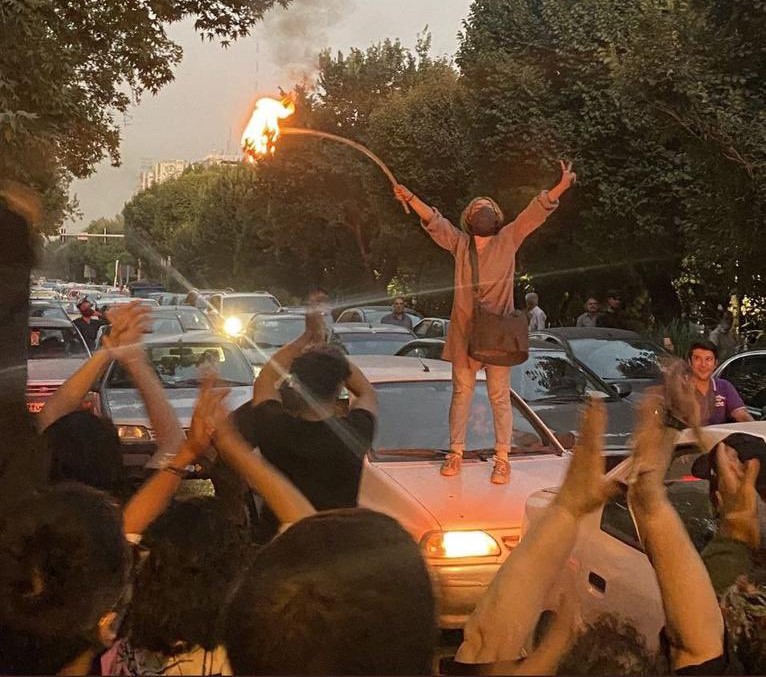 A woman stands on a vehicle burning her hijab in protest against Mahsa Amini’s death in custody for wearing her hijab in “improper” fashion, according to the morality police. Source: Twitter

In recent years, the Islamic Republic has been marred by economic turmoil with high unemployment rates and skyrocketing inflation. Many Iranians blame the government for systemic corruption that is a link to the failure to deliver better social and economic reforms.

“What we see here is a state versus society where the state adheres to an ideology which people do not buy,” he said.
“People have been promised in the past four decades a better life and economy, more social and physical freedom. But what we see is that people are now deeply frustrated with these unfulfilled promises.
“It’s not only a demonstration, it is not a protest. It is an explosion that ignores the people’s wishes.”
Dr Saleh said that the values the regime aims to uphold “move exactly in the opposite direction” as the Iranian society, and has called on the morality police to be “dismantled entirely”.
While Iran has been rocked by protests from citizens frustrated with the socioeconomic state of the country – the most recent in 2019 when fuel prices skyrocketed and left 1,500 killed in the unrest – this movement is being headed by women.

“Women are leading this protest and this movement. This is new. And women will never lose. This should be warning the regime.”

What has been the reaction from Iranian authorities?

Mr Raisi ordered an investigation to be conducted into the death of Ms Amini and was reported by IRNA, a state news outlet, to describe her as like his “own daughter”, promising her family justice.
But according to state-affiliated news agency Fars, protests have been met with violence from security forces who have retaliated with live ammunition, pellet guns and teargas.
Kurdistan governor Ismail Zarei Koosha confirmed three people, including a security official, have been killed in the ongoing conflicts, blaming the deaths on foreign interference, and describing it as “a plot by the enemy”.
Human rights organisation Hengaw said at least seven people have been killed in Kurdistan and 450 injured, the province in which Ms Amini is from. This has not been verified by Iranian authorities.
In a bid to alleviate tensions, an aide of Iran’s supreme leader Ayatollah Ali Khamenei visited the family to send condolences on his behalf.
“I assured the family … that all institutions will take action to defend the violated rights of Ms Amini and none of their rights will be ignored,” the representative, Abdolreza Pourzahbi, said, according to the state-affiliated media outlet, Tasnim news agency.