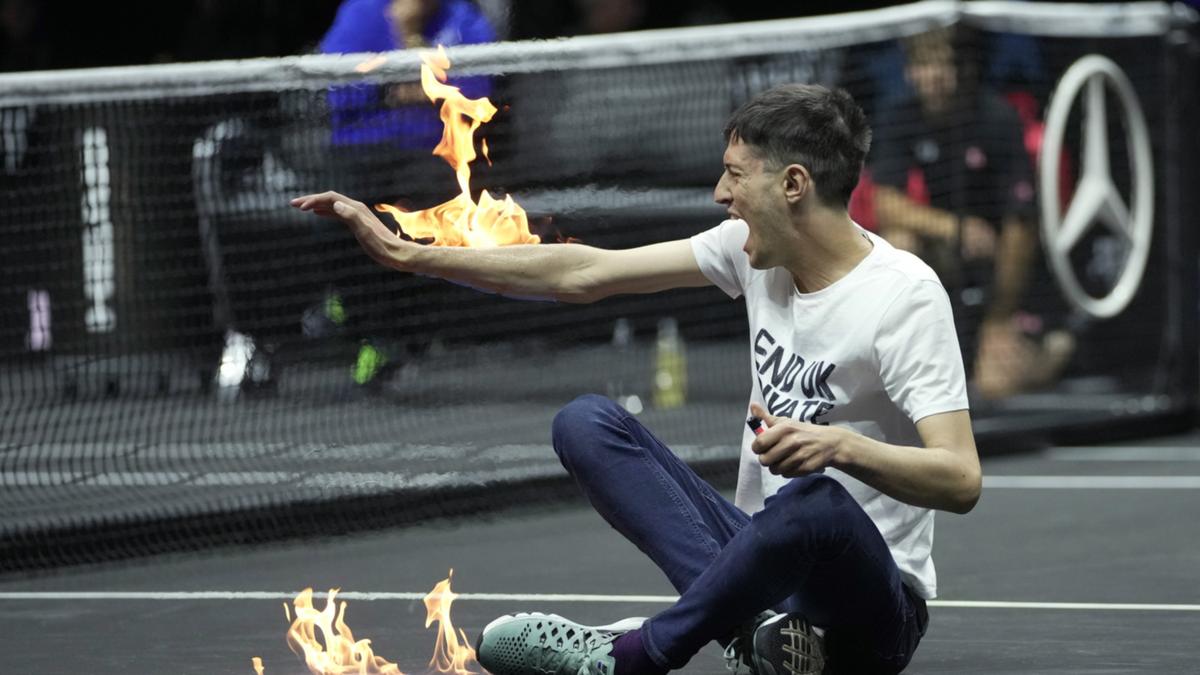 A man has set his arm on fire during an on-court protest in London as Roger Federer prepared to say goodbye to the sport he has dominated for more than two decades.

The incident unfolded at London’s O2 during the opening session of the Laver Cup match between Stefanos Tsitsipas and Diego Schwartzman, with a man running on court at changeover after the first set.

Wearing a T-shirt which read “End UK Private Jets”, the man sparked the fire on the playing surface near the net. It then spread to his arm, but luckily did not go any further and was soon out.

One of three security workers used their jacket to extinguish the fire still burning on the court before the man was carried out of the arena.

Local police said the man, who was taken to hospital as a precaution, was arrested on suspicion of aggravated trespass.

It failed to knock world No.6 Tsitsipas off his stride with the Greek despatching Schwartzman 6-2 6-1, but Tsitsipas admitted he was shocked.

“It came out of nowhere. I have no idea what this is all about. I never had an incident like this happen on court. I hope he is all right,” Tsitsipas said.

There was heartbreak for Federer when he did finally make it on court for his doubles match alongside fellow champion and friend Rafael Nadal.

Despite a promising start in which they claimed the first set, the star duo was eventually overcome by the US pairing of Jack Sock and Frances Tiafoe in three: 6-4, 6-7, 9-11 (tiebreaker third).

It brought a close to Federer’s stunning career, which includes 20 grand slams, at the age of 41.

The Australian won 5-7 6-3 10-7 in two hours and 29 minutes to open the account of Team World against Team Europe, reducing the deficit at 2-1 to Europe after three singles ties on day one.

Both players were evenly matched with Minaur winning just one more point in the match, but the world No.22 converted three of five break points compared to Murray’s two from seven.