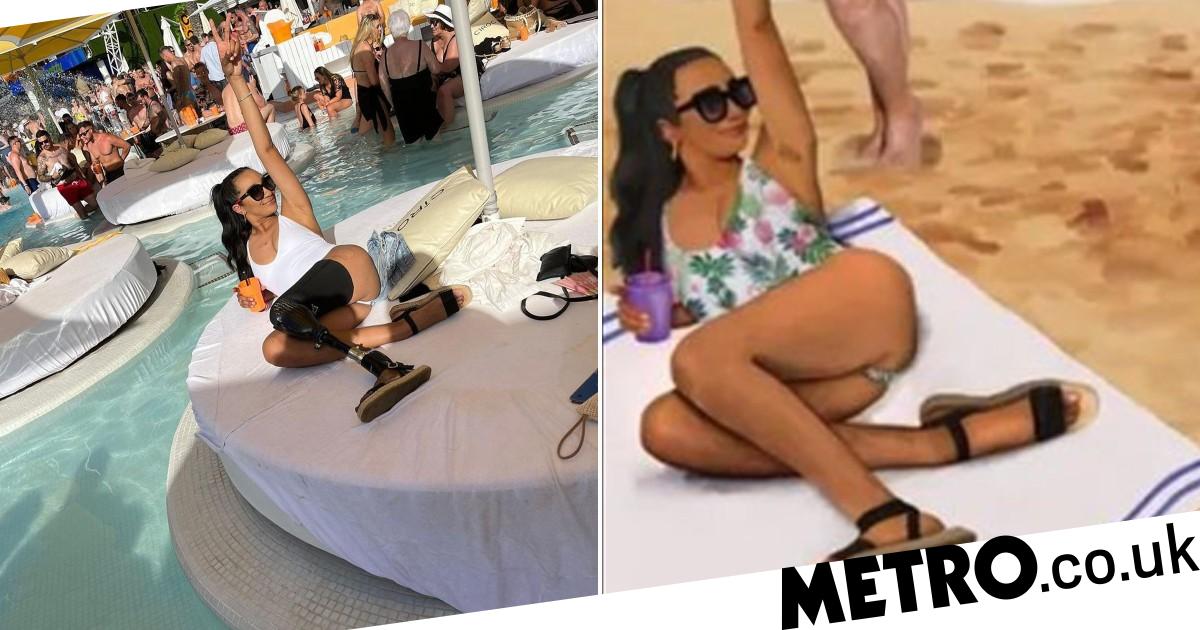 A disabled woman was left horrified after she found out her photo had been used without consent on a campaign poster – and her prosthetic leg edited out.

Sian Green-Lord lost her limb when she was hit by a taxi on a visit to New York in 2013.

A nearby plumber witnessed the crash and used his belt to make a life-saving tourniquet.

Meanwhile, a pizza truck owner had raced over to put her severed foot on ice.

The then-24-year-old’s leg was later amputated due to the severity of her injuries.

Since the crash, Sian has gone on to become an advocate for disabled people and uses her social media to share her journey with a prosthetic leg.

She has worked as a motivational speaker and starred in documentaries.

Sian first found out she had been caught up in the scandal engulfing the Spanish Government when her friend pointed out the poster.

Officials have commissioned a poster to promote body positivity, but used photos of various influencers without permission.

Not only does an edited image of Sian feature on the poster, but her prosthetic limb does not feature in the finished product.

Sian took to Instagram to voice her anger and confusion at the situation.

‘I don’t know how to even explain the amount of anger that I’m feeling right now,’ the influencer, from Leicester, said in an Instagram story.

She added: ‘It’s just been brought to my attention by one of my friends that the Spanish Government are using my image on a body positivity campaign but they have edited out my prosthetic leg.

‘I’m literally shaking, I’m so angry I don’t even know where to begin to explain this and how it has actually made me feel.

‘There’s one thing using my image without my permission, but it’s another thing editing my body with my prosthetic leg.

The campaign poster was released by the Women’s Institute – part of Spain’s equality ministry – and entitled ‘Summer is ours too’.

It featured five women of various body types and backgrounds. One woman in the poster has had a mastectomy.

On Thursday, Metro.co.uk spoke with Nyome Nicholas-Williams, known as Curvy Nyome on Instagram, who shared her shock at finding out she was also featured.

She only found out about the campaign when her aunt messaged to congratulate her.

She told Metro.co.uk the incident was a reminder to her ‘that as a black woman my body is still policed and as women in general our bodies are still not ours,’.

She added: ‘I didn’t have any control over how my body was being used in the image, so I was really sad initially. Then, I felt really angry.’

‘I really wish that I recognised the rest of the women as we could have banded like the Spice Girls and taken on the Spanish government,’ she added.

It is unclear when the image was altered or whether the Spanish government or artist behind the poster were aware of the change before the photo was used.

Metro.co.uk has made attempts to contact the Ministry of Equality and the artist behind the illustration for comment.

In a statement earlier this week, the Women’s Institute in Spain said the campaign was ‘a response to fatphobia, hatred and the questioning of non-normative bodies – particularly those of women, something that’s most prevalent in the summertime’.

The artist behind the poster has also issued a public apology and stated she had used the women as inspiration and never meant to ‘abuse’ their images.

She said: ‘Given the – justified – controversy over the image rights in the illustration, I have decided that the best way to make amends for the damages that may have resulted from my actions is to share out the money I received for the work and give equal parts to the people in the poster.’