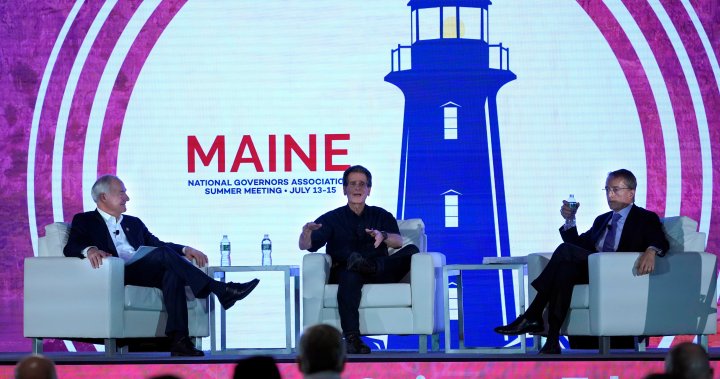 With stark political divides on abortion, gun violence and other issues threatening to overshadow their meeting, the nation’s governors sought to find common ground – on other issues.

The National Governors Association formally kicked off its summer gathering Thursday, the first in-person meeting since 2019, before the COVID-19 pandemic. It follows recent U.S. Supreme Court rulings that have deepened the rift between red and blue states, by overturning Roe v. Wade and striking down gun restrictions in New York.

“It’s about trying to find things that we can work on together, and that’s plentiful,” said Arkansas Gov. Asa Hutchinson, a Republican who is wrapping up his yearlong term as the association’s chair.

Hutchinson is handing the reins of the group to Democratic Gov. Phil Murphy of New Jersey, who will serve as its next chair. The two governors announced last month a bipartisan task force to make recommendations on preventing mass shootings, following the massacre at a Texas elementary school that killed 19 children and two teachers.

The task force was announced before President Joe Biden signed into law a sweeping, bipartisan gun violence measure that includes billions in new funding for mental health and school safety. The task force is comprised of eight governors, equally divided between Republicans and Democrats.

Hutchinson said he sees the group helping shepherd that law’s implementation at the state level.

Republican Gov. Spencer Cox of Utah, a member of the task force, acknowledged that any change to gun policy would invite controversy in his state, yet he encourages politicians to listen to proposals from across the political spectrum, including funding for school security, counselors, gun buybacks and red flag laws.

“I’ve asked everyone to be open to every conversation,” Cox, the association’s incoming vice chairman, said in a press conference last month.

The public agenda at the event in Maine avoided any high-profile partisan issues. Sessions on Thursday featured Intel CEO Patrick Gelsinger and the leader of a global robotics competition for a discussion of computer science education. Another session focused on travel and tourism.

The governors also held several other events, including a mixer Wednesday evening and a scheduled lobster bake Thursday evening.

Security was tight with road closures and a large police presence. Organizers declined to say if there was a specific threat or concern.

Hutchinson said he doesn’t see the governors association addressing abortion following the reversal of Roe. That ruling has pitted states against each other, with “trigger” bans taking effect almost immediately after the ruling in a number of states.

Medication abortion is common in U.S. Here’s what to know

Republicans in some states are looking at ways to prevent women from going out of state for abortions, steps that could include going after abortion providers. In response, some Democratic governors have signed measures banning their state’s law enforcement agencies from enforcing other states’ abortion bans. That includes Democratic Gov. Janet Mills, who formally welcomed the governors to her state on Thursday.

When she signed an executive order last week, Mills said she “will stand in the way of any effort to undermine, roll back or outright eliminate the right to safe and legal abortion in Maine.”

Partisanship was underscored on the eve of the gathering as New Hampshire Gov. Chris Sununu campaigned alongside fellow Republican Paul LePage, a former Maine governor who hopes to unseat Mills.

Newsom, the governor of California, has even run a campaign ad in Florida criticizing that state’s Republican leaders. And protesters supporting reproductive choice gathered outside an event some of the governors attended on the Portland waterfront.

Nonetheless, Hutchinson said the group has been able to work together on other issues, being a voice for the states during the COVID-19 pandemic and during negotiations over the bipartisan infrastructure package.

Massachusetts’ Republican Gov. Charlie Baker said the governors tend to get along with each other _ and they tend to focus on things where they can get results instead of areas of disagreement.

“While we will disagree on different issues, we as a group have much more in common than what sets us apart,” said Mills, the host governor.

Hutchinson’s chairmanship of the group has elevated his national profile as he considers running for president in 2024. The two-term governor, who leaves office in January, has criticized former President Donald Trump and has urged fellow Republicans to move on from the 2020 election.

Murphy is coming into the chairmanship after narrowly winning reelection as governor last year. An unapologetic progressive, he recently signed legislation enshrining abortion rights into law and a new package of gun control bills.

IN PHOTOS: Here’s how green became the colour of abortion rights

Even though they’re at opposite ends of the political spectrum, Hutchinson had words of praise for his successor.

“Part of being a human being is that you recognize good quality that you see in people, even though disagree fundamentally and you’re on a different team. I think that’s needed in America today,” he said.