The UK’s signature music festival, Glastonbury, is famous for its mud. And punters seem to mostly enjoy how feral the festival ground gets most years.
But ‘Squalor in the Mud’, ‘Splendour in the Trenches’ or ‘climate apocalypse fest’ — as some named the Splendour in the Grass music festival at the weekend — is not. 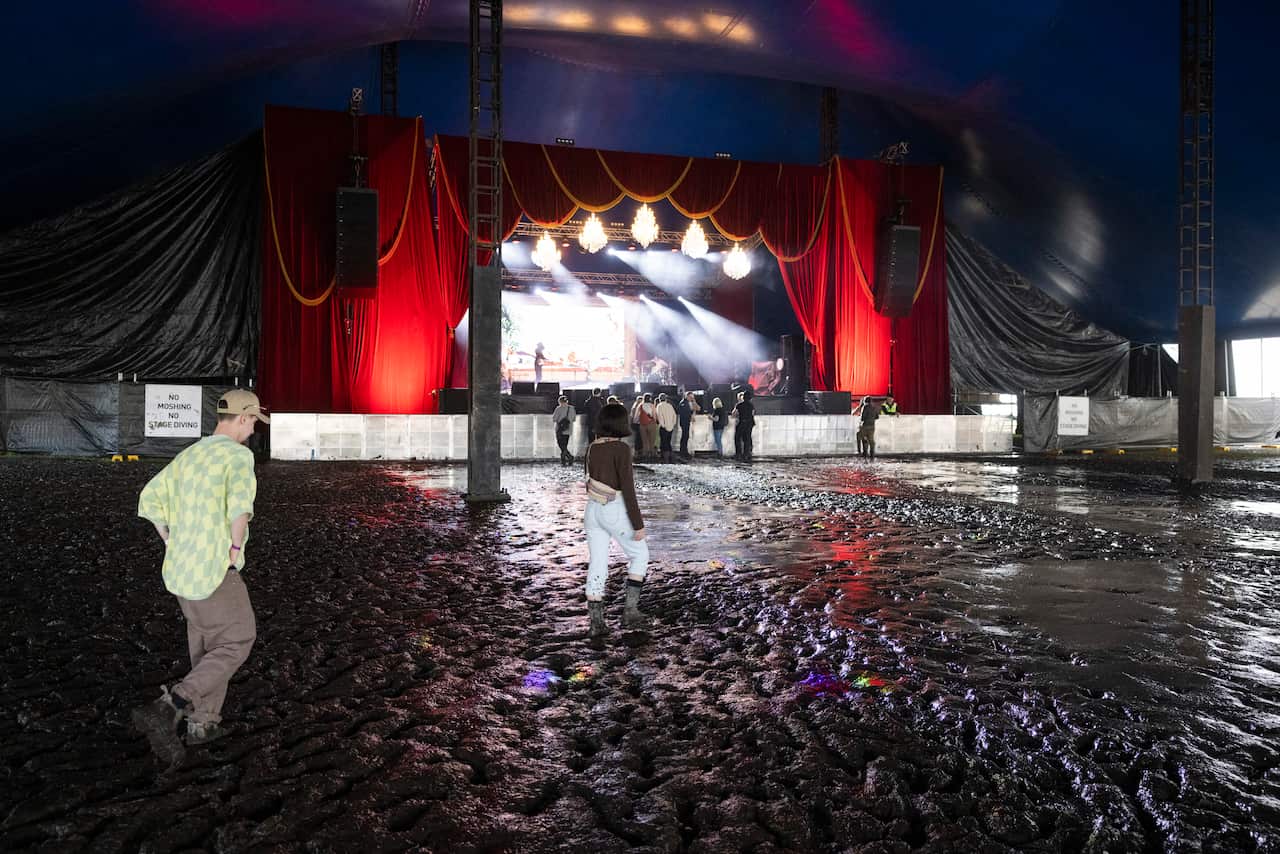 A general view during Splendour in the Grass 2022 at North Byron Parklands. Festival organizers cancelled the first day of performances due to heavy rain at the festival site. Credit: Matt Jelonek/Getty Images

The mud hadn’t dried before questions were raised on the future of the event and others in light of the changing climate.

The 2020 State of the Climate report by the CSIRO and Bureau of Meteorology found climate extremes in Australia —such as extreme heat, heavy rainfall, coastal floods, fire weather and drought were becoming more common — and are projected to stay on this path as the climate warms.
Julia Robinson, the managing director of the Australian Festival Association (AFA) told The Feed it’s a risk factor heavily weighing on the minds of organisers.
At the end of each year, the AFA conducts a risk assessment looking at concerns impacting festivals locally and abroad.

“Climate was certainly right up there as one of the biggest risks to the industry,” Ms Robinson said, reflecting on last year’s review. People drag their camping kit through the mud as a car is pushed by a tractor at the 2016 Glastonbury Festival, where walking through thick mud is part of the experience. Credit: Matt Cardy/Matt Cardy

Ms Robinson, who works with representatives from Secret Sounds (which runs Splendour in the Grass) and festivals including Listen Out, Field Day, Groovin the Moo, said the impacts of a changing climate have never been more visible than in the past five years.

Revellers at Victoria’s Falls Festival in 2019 were told to head home a day into the four-day event due to an extreme fire risk. In a statement, the organisers of the long-running New Year’s Eve festival at Lorne, two hours from Melbourne, said conditions were just too dangerous.
Some 9,000 attendees were already camping on site when the announcement was made. But with 40-degree temperatures and the festival surrounded by bushland, normal festival congestion couldn’t be risked in an emergency.

“Considering the heat and bushfires in summer, you think maybe the middle of winter is the way to go, but then you see the issues with rain,” Ms Robsinson said.

“It’s just going to be really important to be flexible with planning around dates and locations.”
Even before the pandemic hit and cancellations became commonplace, she said organisers were facing rising insurance premiums and policies for events in certain locations.
“In some instances, (organisers) were not able to either get the insurance or it was completely unaffordable,” she said. “It’s definitely a live consideration.”

Now with the pandemic in the mix, she said insurance costs are at least 30 to 40 per cent more than what they were a handful of years ago.

A step away from nature?

Heightened exposure to the elements is a risk you take by hosting big music festivals among the natural beauty of regional areas, Ms Robinson said.
But moving to communities with fewer “drainage issues, better bushfire evacuation routes, or even just access to tertiary hospitals”, is not a simple task, and she expects conversations around infrastructure with state governments to pick up in the next few years.
“It’s going to need all of us working together, making sure there are open lines of communication between government departments, the organisers and communities.”

Evelyn Richardson is the chief executive of Live Performance Australia, which represents Australia’s live performance industry. She told The Feed it’s likely some festival locations will be written off the list for good. “Some locations where events may have been held in the past, they won’t be held there in the future, because they’ll be deemed higher risk than they might have been 10 years ago,” she said.

Minister for Emergency Management Murray Watt on Monday called the events a reminder of Australia’s changing landscape.
“I don’t think we want to get to a point in this country where we can’t have fun and can’t have festivals and certain regions can’t host things,” he said on ABC radio.
“I’ve probably been to Splendour in the Grass at least 10 times and it’s never been an issue there before.

“But I think it does remind us that we live in a changing climate. That’s why we need to take climate action and drive down emissions as we intend to.”

The AFA was initially formed in response to safety issues connected with drug use at festivals before it expanded to become an industry advocate to communicate between stakeholders.
But these initial considerations around drug use at music festivals are still connected to the growing considerations around climate.
Ms Robinson said a 2019 coronial inquest into the deaths of six music festival attendees who had taken drugs found that hot weather — and even extreme heat — was a common theme in the findings.

“Safety issues connected with drug use seem quite far away from environmental issues, but the coronial inquest into the death found it was connected to extreme days of heat,” she said.

‘Splendour has been a warning’

Sue Higginson, formerly a public interest environmental lawyer who is now a NSW Greens MP, told The Feed the North Byron Parklands, where Splendour in the Grass was held, was already known to be a constrained site, meaning there are restrictions on how the area is used.

Ms Higginson who lives in the Northern Rivers region, which was underwater just a few months ago, said the site is known to be flood-prone land. She acted as a solicitor for conservationists who sought to knock back the application for Splendour in the Grass to host on the site, and won in the Land and Environment Court before it was later approved by the NSW government, she said.
“In some ways, I think the events of the weekend and Splendour in the Grass have been a warning.”
She hopes future planning will be more considered.
“The organisers need to be really serious and recognise that they knew the land was constrained in the beginning … We are all really lucky that things didn’t go worse.”

The Feed reached out to Splendour in the Grass for comment.