UN head Antonio Guterres has warned that a misunderstanding could spark nuclear destruction as the United States, Britain and France urged Russia to stop “its dangerous nuclear rhetoric and behaviour.”
At the opening of a key nuclear Non-Proliferation Treaty (NPT) conference in New York on Monday, Mr Guterres warned that the world faced “a nuclear danger not seen since the height of the Cold War.”

Citing Russia’s war with Ukraine and tensions on the Korean peninsula and in the Middle East, Mr Guterres said he feared that crises “with nuclear undertones” could escalate.

“Today, humanity is just one misunderstanding, one miscalculation away from nuclear annihilation,” Mr Guterres told the 10th review conference of the NPT, an international treaty that came into force in 1970 to prevent the spread of nuclear weapons.
“We have been extraordinarily lucky so far. But luck is not a strategy. Nor is it a shield from geopolitical tensions boiling over into nuclear conflict,” he added, calling on nations to “put humanity on a new path towards a world free of nuclear weapons.”

The meeting, held at the UN’s headquarters in New York, has been postponed several times since 2020 due to the COVID-19 pandemic. It will run until 26 August. 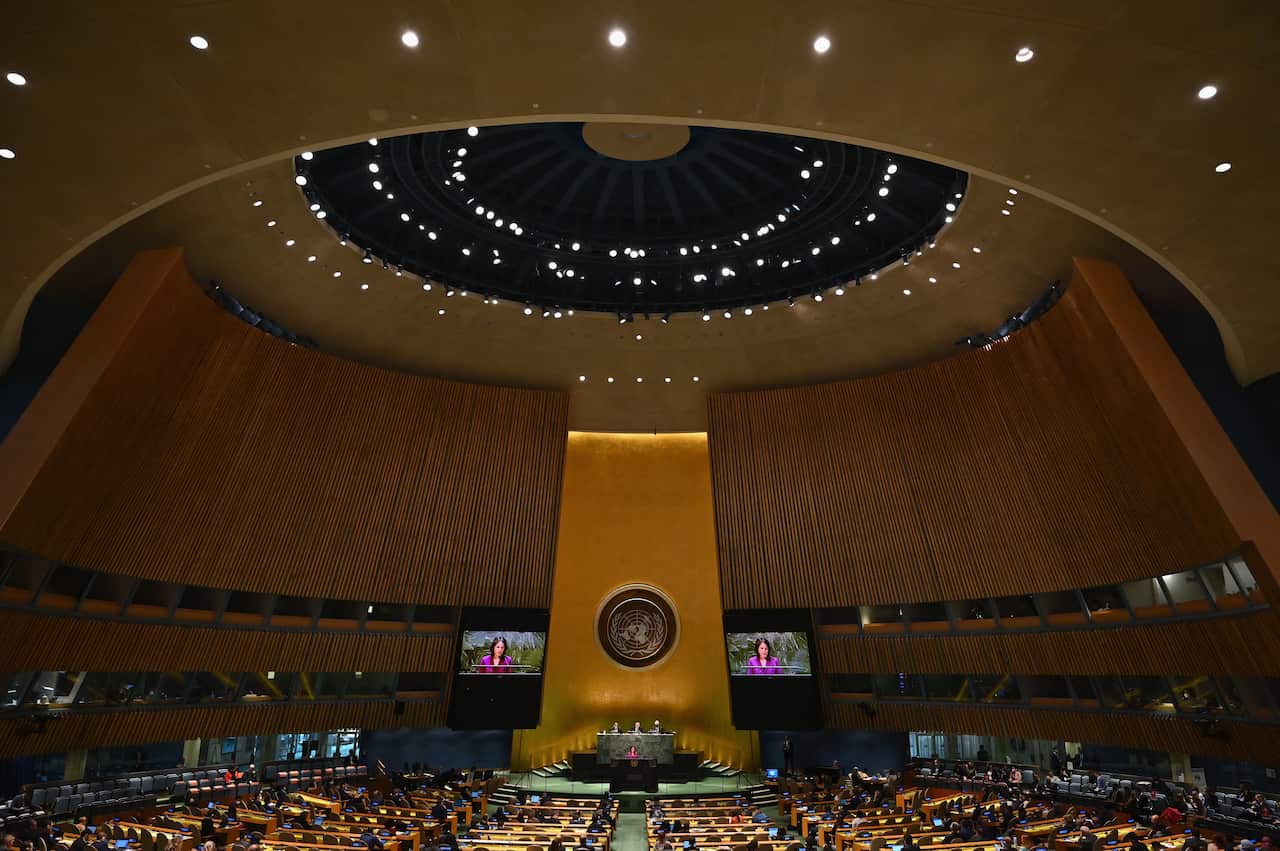 Minister for Foreign Affairs of Germany Annalena Baerbock speaks during the 2022 Review Conference of the Parties to the Treaty on the Non-Proliferation of Nuclear Weapons at the United Nations in New York City on 1 August, 2022. Source: AFP / ANGELA WEISS/AFP via Getty Images

Mr Guterres said the conference was “a chance to strengthen” the treaty and “make it fit for the worrying world around us.

“Eliminating nuclear weapons is the only guarantee they will never be used,” the secretary-general implored, adding that he would visit Hiroshima for the anniversary of the 6 August, 1945 atomic bombing of the Japanese city by the United States.

“Almost 13,000 nuclear weapons are now being held in arsenals around the world. All this at a time when the risks of proliferation are growing and guardrails to prevent escalation are weakening,” Mr Guterres added.
In January, the five permanent members of the UN Security Council — the United States, China, Russia, Britain and France — had pledged to prevent the further dissemination of nuclear weapons.

On Monday, America, Britain and France reaffirmed their commitment in a joint statement, saying a “nuclear war cannot be won and must never be fought.”

The three also took aim at Russia, urging Moscow to respect its international commitments under the NPT.
“Following Russia’s unprovoked and unlawful war of aggression against Ukraine, we call on Russia to cease its irresponsible and dangerous nuclear rhetoric and behaviour,” they said.
The statement came as US President Joe Biden called on Russia and China to enter nuclear arms control talks.

The US leader reiterated in a statement that his administration is ready to “expeditiously negotiate” a replacement to New START, the treaty capping intercontinental nuclear forces in the United States and Russia, which is set to expire in 2026.

The NPT, which the signatories review every five years, aims to prevent the spread of nuclear weapons, promote complete disarmament and promote cooperation in the peaceful use of nuclear energy.
At the last review conference in 2015, the parties were unable to reach agreement on substantive issues.
“The world can never be safe as long as any country has nuclear weapons,” said Beatrice Fihn, executive director of the International Campaign to Abolish Nuclear Weapons, who was in New York for the meeting.

“And the NPT recognises this,” she added. “It’s the reason that the treaty exists. And now states, parties more than ever need to act.”