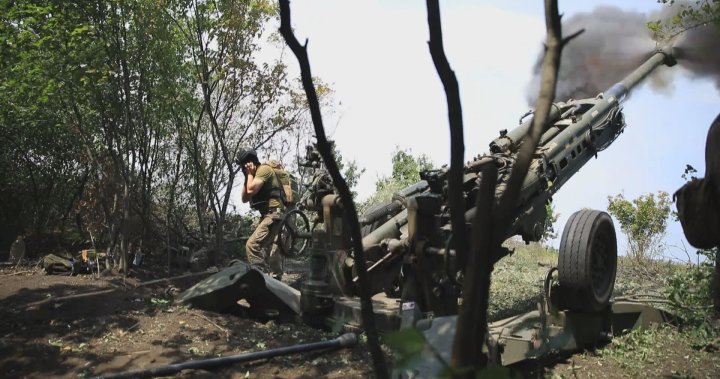 Deep within a thicket of trees near Ukraine’s eastern front lines, a group of soldiers hurriedly dismantle a pile of branches to reveal a long barrel underneath, aimed straight at the Russian border.

The men rush around the back of the M777 howitzer, loading its chamber with an artillery round and then standing back, fingers in their ears and mouths agape to protect their eardrums, as a deafening explosion rings out across the countryside.

They do this between 100 and 130 times per day, between the three M777s in this position, in a hidden location in the southern Kharkiv region.

This week, Global News was escorted to the secret M777 location near the front lines in Kharkiv to observe the long-range artillery in operation. Canada sent a number of M777s to Ukraine in April, as part of a $130-million support package, and has since sent millions more in replacement barrels and ammunitions, among other lethal aid.

Long-range artillery has become crucial in attempts to turn the tide of the war, allowing Ukrainians to target Russian troops and locations from farther away, in turn preventing further strikes on Ukrainian forces.

“Artillery is saving the blood of the infantry. We need them to save troops,” Andriy, the battalion’s deputy commander and an artillerist, tells us.

Canada, the United States and Australia have donated the M777s being used by Ukrainian soldiers in Kharkiv. These 155-millimetre towed howitzers have a range of up to 30 kilometres.

But to really make an impact, several soldiers say, they need more long-range artillery. While they’re grateful for the weapons being donated by the international community, the much-lauded American-made High Mobility Artillery Rocket System, also known as HIMARS, is the golden goose.

But both guns have been sent in with the same purpose: to arm the Ukrainian military with more sophisticated, western weaponry.

“Their weapons are Soviet weapons … and here, ours are more technological, more professional,” battery commander Yevhen says. “They are easier to use.”

The battalion doesn’t know which country their M777s has come from, but it’s possible this one is at least in part Canadian – it was damaged and needed parts swapped out to fix it, Andriy says.

It has destroyed “a lot” of Russian weapon storage facilities, infantry, warehouses and “hidden commander points,” the soldiers say.

The current location of the M777s is deep within eastern Ukrainian farmland, strategically hidden from view by thick shrubbery.

As we approach, Andriy, who is also the driver of our military escort, instructs us to turn our phones onto airplane mode. Russian troops otherwise track clusters of GPS signals to identify soldiers’ locations.

Passing through the countryside, the scars and new landmarks the war has brought this unassuming rural community are everywhere: a school lies in ruins, with holes blown out of its walls and roof, targeted by an attack in June; an unexploded rocket nose down in a patch of trees; a crater in the road the size of a car inflicted by a Russian Hurricane rocket.

At one stage, we pass by a cluster of barrels, pointed toward the sky. Fakes, Andriy says with a smile, which have successfully fooled Russian drones in past weeks.

The actual M777 position is in a nondescript location among yellow pastures. We pass by a Starlink satellite dish and descend into a thicket of trees, where about 20 men have been camped for about a month.

They’ll move and set up somewhere new when the Russians figure out their location and respond with counter-shelling, battery commander Yevhen explains.

The current position is a simple setting: a small tarpaulin stretched between two trees to provide some reprieve from the elements, several trenches carved into the dirt and a few planks of wood fashioned into a countertop, where the soldiers boil water atop a single-burner gas stove and ceramic bowl to make us coffee. Empty propellant cylinders have been recycled to build shelters. The loud “booms” of artillery fire can be heard nearby.

About 50 metres away, one of the M777s lies in wait underneath a pile of branches, propellant cylinders and ammunition stored beside it between the trees.

Yevhen travelled to Germany to receive training on operating the gun. He then returned and taught his troops how to use it within about two weeks, he says. This isn’t the first time they’ve fought together – this battalion was previously stationed in the Donbas.

They’ve now been using the M777s for three months and were one of the first battalions in Ukraine to receive them.

Canadian embassy in Kyiv still shuttered despite ‘reopening’ in May

Yevhen says the weapon is lightweight, accurate and easy to camouflage and has worked well to support the infantry on the front lines.

He says he is grateful for the ongoing support from Canada.

In June, Defence Minister Anita Anand announced the provision of 10 replacement barrels for the M777s as part of a $9-million military aid package. Canada also earlier sent some 20,000 rounds of artillery, worth $98 million, that work with weapons sent by NATO allies, including the M777s.

However, if he had a choice, a delivery of HIMARS systems would make more of a difference, Yevhen says. Whereas the M777s need to be towed behind a vehicle, the HIMARS system is a self-drive, sitting on a wheeled chassis, meaning it is more mobile. The crew can drive the HIMARS to a new location before the enemy has a chance to shoot back.

The M777s can also only shoot one round at a time, whereas the HIMARS system can shoot multiple rounds at once.

While the U.S. has armed Ukraine with more HIMARS systems, it has stipulated that the weapon cannot be fired into Russian territory, over concerns it could be seen as foreign interference and could escalate the war.

Poland and the Baltic states have also recently put in multi-million-dollar HIMARS orders to bulk up their defence systems.

In the meantime, the Ukrainians have dug in for the long haul.

Here in this community, normal village life and the top-secret military location that is now housed within it have become intrinsically linked.

Less than a few hundred metres from the M777s’ position, a farmer is out in his tractor tending to his crops. Combine harvesters plough the fields. Two older men on bicycles pedal down the dusty road, fishing rods propped up on their handlebars. A shirtless man trundles down the road atop a trike. A family waves at military vehicles from the roadside. Men in military uniform relax outside a small store, smoking and chatting.

Ammunition must be delivered every day, he explains, so military vehicles are now a common sight around here.

The locals don’t seem to mind; Andriy waves to them all as he drives past, and they wave back.

Nearby, row upon row of sunflowers – Ukraine is the world’s largest exporter of sunflower oil, and it is also the country’s national flower – swathe the countryside in a bright yellow glow.

It is a cruel juxtaposition to the brutality of the war raging nearby.

As he deposits us back to our meeting place, Andriy farewells us with a stark message.

“I hope our next meeting with you will be in the main square in Moscow,” he says. “After our victory.”